Bats are not blind. Like many animals, they are born blind, but gain eyesight from the time they are seven to nine days old. 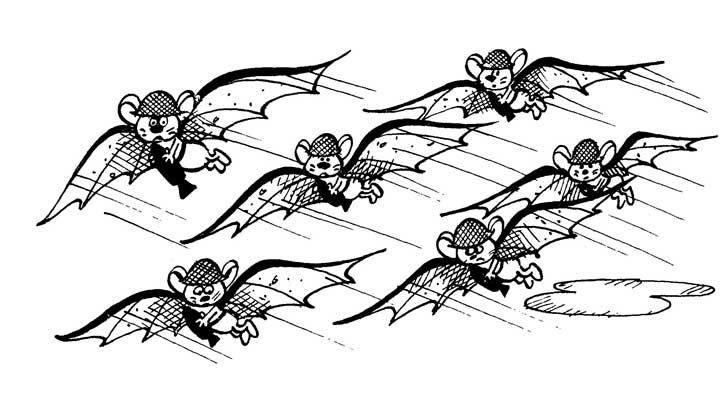 The saying, “blind as a bat,” probably arose because of the way bats fly around, darting here and there at night. Actually, the bat is hunting insects, which people cannot see in the dark when the bat is flying about.

Bats are night creatures. Most come out only at night to hunt.

Although they can see reasonably well, they are not equipped with the special eyesight possessed by other night-hunting animals such as owls and cats. Instead, bats fly and guide themselves in the dark by means of a sonar system.

This is how the bat’s sonar system works. As the bat flies, it emits a high, squeaking sound, unable to be heard by human ears. As the sound travels outward, it hits objects and bounces back.

These sound waves tell the bat where objects are so they can be avoided. This method of locating objects is called echolocation. Bats fly safely at night by using their ears, not their eyes.

During World War II, a special army unit began training bats to carry bombs into cracks and crevices of enemy buildings. The war ended before the project was ever put into operation.

1 thought on “Are Bats Really Blind?”