This is a gullibility test. The Bathtub was introduced in England in 1828. The first tub in America was used by a Cincinnati resident named Thompson in 1842. After an argument among medical authorities concerning the benefits and hazards of bathing, the Bathtub was banned in Boston in 1845. Six years later, the first Bathtub was installed in the White House for Millard Fillmore. 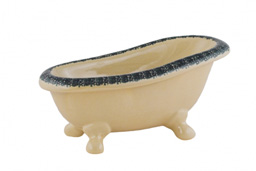 Believe it? Well, this capsulated History of the Bathtub appeared in the New York Evening Mail in 1917, and was immediately accepted as fact by many readers. But the article was actually the devious work of humorist H.L. Mencken, and was, as Mencken readily admitted, a “tissue of absurdities, all of them deliberate and most of them obvious.” Yet, much to Mencken’s amazement, more than one lazy writer subsequently published the information as the gospel truth, leading to a plague of misinformation often called the Great Bathtub Hoax!

The institution of bathing is much older than Mancken facetiously suggested; although the porcelain tub, now indispensable in every home, is a rather recent innovation. The fact is, regular bathing has periodically gone in and out of fashion over the centuries.

Considering what we now know about hygiene, it’s likely that the Bathtub is here to stay. From time immemorial, the act of bathing has been regarded as a sacred rite in many cultures. The ancient Egyptians bathed before worship, in the belief that both the body and soul should be pure in the presence of the gods. Christian baptism is a bathing rite, symbolizing the washing away of original sin. To the devout Hindu, a Bath is a once-yearly rite, taken only in the water of the sacred Ganges.

The ancient Greeks are thought to have introduced the Bathtub, or at least the wash basin. The Greek vessels were used to hold water for rinsing, but were too small to accommodate a bather. The ruins of the palace at Knossos, Crete, reveal a number of bathrooms that were apparently supplied by a relatively advanced plumbing system. Vase paintings suggest that the Greeks used some form of shower as well. Most early Greeks, by the way, washed only with cold water-warm water was considered effeminate.

In later periods, the Greeks built Public Baths; but it was the Romans who made the bathhouse the center of their social lives. In the early days of the Roman Republic, wealthy citizens often installed private baths in their homes, similar to the modern Turkish bath.

Later, the Public Bath came into vogue in almost all cities and towns of the Empire. Huge baths, or thermae, became the recreation centers of the Imperial City itself, providing not only bathing facilities but gyms, libraries, theaters, gardens, and assembly halls.

The Roman Baths were masterpieces of architecture and engineering, and the epitome of imperial luxury. The walls were usually covered with marble; the high, vaulted ceilings were decorated with colorful mosaics. The water taps were made of silver. Statues were every where, with small cubical lockers set in the niches between them. Hot water was provided by furnaces and piped into the bath. The rooms were kept warm by smoke and hot air circulating under the floors and in the hollow walls.

The Baths of Caracalla, constructed in 217, could accommodate 1,600 bathers in an area of more than a million square feet-an area which included a stadium. Extensive remains of many Roman baths still stand today.

The Roman’s bathing ritual consisted of a series of baths, each taken in a different room. The bather began in the undressing room, then moved to another room where he was anointed with oil, then to the gym for exercise. After the gym came the calidarium, or hot bath; then the steam room, the tepidarium, or lukewarm bath; and finally, the frigidarium, or cold bath which was usually a sort of swimming pool. Sounds much like our modern health spa, doesn’t it?

Until the second century, men and women bathed together in Rome. Then Emperor Hadrian ordered segregated bathing. However, Hadrian’s decree was frequently overlooked during the more decadent eras of the Empire. In most cities outside Rome, men and women used the bathing facilities at different hours, but it was always considered immoral for a woman to bathe at night.

The Roman Baths were the social centers of the time, combining the modern barroom, health spa, and community center. They were open continually except for religious holidays and times of national crisis. Customarily a Roman would bathe before the principal meal of the day, but some of the more idle-and cleaner-citizens went through the entire bathing ritual as many as six or seven times a day.

As the Empire waned and barbarian invaders destroyed the Roman aqueduct systems, most baths were shut down. But the Public Bath lived on in the Eastern Empire, and was eventually adopted by the Arabs, who liked vapor baths. The Turkish bath is a direct descendant of the Roman bath, via Constantinople.

The Teutonic tribesmen who overran Europe bathed for the most part in cold rivers or streams. During the Middle Ages, among some communities, bathing was considered a sin, an act of pride and an overt concern for the sensual. Probably, the Church’s opposition to bathing stemmed from the excesses of the Roman public bath.

Among the medieval landed classes, the lack of a need to bathe was considered a sign of wealth and leisure. Many an aristocrat bragged of never having taken a bath. Consequently, the demand for perfume and aromatic oils was very high, and the need for spices helped spur the explorations of the fifteenth century which led to the discovery of America. By the way, Queen Elizabeth of England rportedly bathed once a month, “whether she needed it or not.”

After the institution of bathing was revived by the Crusaders’ contact with Eastern bathhouses, the common people took frequent public baths. Public baths were common in France as early as the twelfth century, and were reputedly as notorious for their promiscuous activities as had been their Roman precursors. By the seventeenth century, no decent citizen would consider entering a public bath, and the Church frequently decried the excesses of the institution.

Because of the aristocracy’s aversion to bathing, many of the more famous palaces surviving today are completely without sanitation facilities. Although many people dispute it-and other refuse to believe it-there were evidently no toilets of any kind in either the Louvre or in the palace at Versailles. Members of the court were expected to relieve themselves before they entered the palace; the rows of statues that lined the garden promenades provided convenient niches for an undisturbed tinkle.

In Europe, the medicinal spring bath has been popular for centuries. During the eighteenth century, the English city of Bath-so named after an ancient Roman spa built there-became the most fashionable resort in all Europe, thanks chiefly to the restorative work of Beau Nash. Such luminaries as Pitt, Nelson, Gainsborough, Garrick. Gay, Pope, Steele, and Fielding came to enjoy the social life and the hot, radioactive waters of the natural spring. Like earlier baths, however, the resort at Bath eventually became associated with debauchery and the spread of disease.

The word “Spa,” incidentally, comes to us from the Belgian town of Spa. A mineral spring discovered in 1326 helped make the town a very fashionable resort during the eighteenth century. Today, the most famous spas in the world are at Baden-Baden in Germany (bad means “bath” in German), Carlsbad in Czechoslovakia, Vichy in France, and Hot Springs in Arkansas.

The earliest bathtubs in America were simple wooden tubs, lined with metal and the water was poured in by hand. The first public bath was opened here in 1852. An 1895 law ordered all municipalities in New York State to provide free public baths for their citizens, many of whom had no other means of washing.

In the early decades of this century, many apartments in American cities were equipped with a bathtub in the kitchen. When European immigrants arrived here many considered the bathtub an unnecessary luxury, and used the tub as a planter for flowers and vegetables.

Traditionally, in Japan, the bath was a large wooden tub placed outside in the garden and filled with very hot water. The entire family bathed together at the same time. In Japanese baths, both public and private, there is rarely an attempt to achieve privacy. Public baths often have large unprotected openings through which people passing in the street can observe the bathers. But nowadays, bathing in Japan, especially in the cities is becoming westernized.

America easily leads the world today in bathtubs per capita. Many American homes are equipped with two or three or even four tubs. The shower has recently replaced the bath as the preferred washing ritual. A shower, by the way, uses up only about half as much water as a tub bath.

Some clever individuals have put the bathtub to a rather strange inventive use: bathtub racing. Tubs filled with outboard motors annually race over a thirty-six-mile course near Vancouver, British Columbia. Reportedly, the record distance achieved by a hand-propelled bathtub in twenty-four hours is an impressive 36.6 miles.