Are you an ailurophile or an ailurophobe? In plain English: Do you love or hate our feline fellow mammals? Either way, you’re in large company. 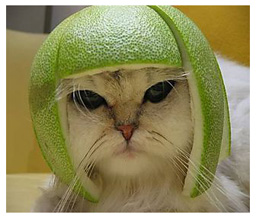 Ever since the domestication of the feline, the cat has been variously regarded as a representation of the gods or an embodiment of the devil. Even today, there seems to be no middle ground. The dog may be loved, hated, or tolerated, but the cat, well, choose your side. Which brings us to the History of Cats.

Dogs and cats are far and away the most popular pets in the world today. But the dog has been a friend of man for much longer, having been domesticated some 50,000 years ago. On the other hand, the cat was not tamed to any extent until just 5,000 years ago. Yet the dog, as we know it today, is in evolutionary terms a rather recent development. The cat family, on the other hand, evolved into its present form some 7 million years ago, long before most surviving mammals. During the intervening ages, it has undergone little change.

Paleontologists believe that the cat family descended from the Miacis, a weasel-like carnivore that lived about 50 million years ago. The Miacis evolved in many directions, one of them producing animals such as the mongoose and the civet that are thought to be ancestors of both the great cats and the smaller felines.
Over the ages, the feline species spread to all parts of the earth, with the exception of Australia and a few islands. The original ancestors of the cat evolved into two general families. One family, called the Hoplophoneus, included the Smiladon, or saber-toothed tiger, and other extinct animals. The second group, the Dinictis, produced all our modern cats.

There are many ways of classifying the members of the cat family, but the most commonly accepted divides the felines into three genera. The Panthera genus includes the great cats, such as the lion, tiger, leopard, and jaguar. The lion is the only gregarious member of the cat family. Its nickname “king of the jungle” is something of a misnomer. The tiger is generally larger and stronger than his unstriped cousin. Fortunately, the two creatures rarely meet-there are no tigers in Africa, and few lions anywhere else.

“Ligers and Tigons” may sound like a classic spoonerism, but these animals actually exist. They are the hybrid offspring of the lion and tiger, and there are about a dozen of these creatures in captivity today. When the father is a lion, the cub is called a liger; when the sire is a tiger, the cub is a tigon. And if a liger and tigon mate, well, you figure it out.

The Acinonyx genus includes only, since ancient times, the cheetah, a sleek, spotted cat that has been domesticated and used in hunting in Egypt, India, and other Asian lands. The cheetah has been called the fastest animal on earth, and can race along at speeds of sixty miles per hour-though some claim to have clocked this quick-footed cat at close to seventy-five miles!

The third genus, Fells, includes the puma, ocelot, bobcat, serval, lynx, and, of course, the common house cat, known rather plausibly in zoological circles as Fells catus.
Paleontologists believe that the cat family descended from the Miacis, a weasel-like carnivore that lived about 50 million years ago.

There is no record of domesticated cats before 3,000 B.C., though by that time the kitty was already regarded as sacred in some Near Eastern cultures. The domestication of the cat either originated in the Nile area and spread elsewhere, or developed independently in various places. In any case, the Egyptians tamed a species of wild African cat, Fells lybica, an animal about the size of the modern house cat, and put him to work protecting grain supplies from rodents. Egyptian artwork also depicts small cats killing snakes in the royal household.

Rodent-hunting cats proved so valuable that the Egyptians considered them representations of the gods, a designation that conveniently helped protect the cat from ancient ailurophobes. The Egyptian cat-god Bast, was a symbol of the kindly powers of the sun, as opposed to Sekmet, the lion-god, who represented the destructive forces of nature. The cat was also worshipped or in some way connected with religious observance in Babylonia, Burma, Siam, Japan, and China, where the domesticated cat first appeared around 500 B.C.

The Egyptians went so far in their ailurophilia as to embalm cats, as they would a member of the royal household. Thousands of cat mummies have been found in Egyptian ruins, along with even more mouse mummies, presumably entombed to provide food for the resurrected cats. In the 1890’s, 180,000 mummified cats found near Cairo were auctioned off in England, where many were used as fuel. The auctioneer used a mummified cat as a gavel to peddle the cats in ton lots.
Legend has it that cats led to the defeat of the Egyptian army in 525 B.C, through a stratagem of the Persian invader Cambyses. The Persian king placed a row of cats in front of his troops, and the Egyptian archers refused to shoot their arrows across the sacred animals.

The domesticated African cat spread from Egypt to Europe, where it interbred with a European wild cat known as Felts silvestris, literally “forest cat.” The Greeks kept few cats, but did use them as household mousers. Phoenician traders brought the domesticated cat to Italy long before the days of the Roman Empire, and cats were not uncommon as household pets among aristocratic Romans. The Romans had a saying that still, well, holds water: “Cats love fish, but won’t touch the water.”

The first record of domesticated cats in Britain dates from around 936, when a law was enacted in Wales for their protection. Throughout the Middle Ages, in most countries, cats, especially black cats, were suspected of sorcery, perhaps due to their stealth, independence, and nocturnal habits. Even today, you find an occasional individual who’s convinced the cat has some supernatural powers. As Sir Walter Scott wrote, “Cats are a mysterious kind of folk. There is more passing in their minds than we are aware of.”

Today, some ailurophiles entertain the idea that mass cat slaughter during the Middle Ages led directly to the spread of the Black Death, because of the consequent rise in the rat population. Actually, considering the sanitary conditions of the day, rats, fleas, and the plague would have flourished with or without the intervention of the feline.

Speaking of mousers, you’ve no doubt heard the one about the traveler who came sadly to the front door of a farmhouse to report an unfortunate accident. “I hate to tell you this, ma’am,” he said, “but I just ran over your cat on the road. I’m terribly sorry. Of course, I’ll replace him.”

“Well, don’t just stand there!” the woman snapped. “There’s a mouse in the kitchen!”

Domesticated house cats fall into two broad groups: short-haired and long-haired. The long-haired variety developed in Persia and Afghanistan, and the two prevalent types of long-haired cat are now called the Persian and the Angora. As a pet, the Persian has replaced the Angora in most Western countries.

The Abyssinian cat, a beautiful short-haired feline, developed entirely from the African wild cat, through Egypt.

The tailless Manx cat is common in the Far East, where few long-tailed cats are found. The name comes from the Isle of Man off England, though it is unknown whether the cat was brought there or developed there by mutation.

The Siamese cat, a much favored pet, first reached the United States in 1895 and has flourished ever since. Incidentally, almost all Siamese cats are cross-eyed.

The number of cats extant throughout the world today is any body’s guess. The United States ranks first among ailurophilic nations. There are an estimated 20 to 25 million cats in American households today, but with the inclusion of all alley cats and other strays, the total cat population could well top the 40 million mark, which is the population figure estimated for American dogs. The popularity of cats in this country continues to grow. The cat-care business is now a multimillion-dollar industry, providing cat food and accessories, cat hospitals, kennels, and even kitty cemeteries. Pedigreed cats sell for upwards of $200.

The precise origin of our word “cat” is uncertain, but similar words designate the feline in many unrelated languages. One Latin word for the feline was catus, and the Ango-Saxons dubbed the creature catt or cat. In French, we find chat, in Italian gatto, in Spanish gato, and in German Katze.

The origin of “puss” is unknown, but “kitty” comes from chaton, a diminutive of the French chat. Since at least 1450, “Tom” has been used to designate a male. A polecat, by the way, is not a cat at all-in the United States, the term designates a skunk.

According to some accounts, the expression “to fight like Kilkenny cats” dates back to a somewhat ailurophobic custom among Hessian soldiers stationed in Ireland: tying two cats together by the tails and hanging them over a fence or clothesline. One day, the story goes, an officer approached a group of soldiers thus occupied. To hide their deed, one soldier cut off the tails of both tormented animals. The officer was then told that the cats had fought so hard that they’d devoured each other, leaving only the tails.

The notion that a cat can fall from a great height and survive is not an old wives’ tale, and may have contributed to the idea that a cat has nine lives. One cat fell from the twentieth floor of a Montreal apartment building in 1973 and suffered only a pelvic fracture.

The story of a cat that fell from the Washington Monument and survived has been batted about for years. According to some, the facts are these: during construction of the Monument, workers came across a cat lurking in the framework near the top of the structure. The cat panicked, and leaped from the scaffolding. Incredibly enough, the cat survived the 500-foot-plus fall but, even more amazingly, the stunned creature was pounced on and killed almost immediately by a wandering dog.

We have no idea how old that unfortunate feline was when it lost its ninth life, but on the average, a house cat can be expected to live from eight to twelve years, with one year in a cat’s life equivalent to about seven years in a man’s life. However, many cats have survived for considerably longer, and life spans of over twenty years are not at all uncommon. The oldest domestic cat on record, a tabby owned by a woman in England, died on November 29, 1939, at the ripe old age of 36 years!

The average household kitty weighs from eight to twelve pounds, but the largest puss on record, a torn from Connecticut, weighed in at a hefty forty-three pounds. And the most valuable cat on record is, depending upon how you look at it, either a tabby inappropriately named “Mickey” who killed more than 22,000 mice during a twenty- three-year career with an English firm, or a pair of house cats which, in 1963, inherited the entire estate of their ailurophilic owner, a California doctor. The estate was valued at $415,000!