Synonymous with opulence is that salty, lumpy marine delicacy known as Caviar. The word is rich with princely connotations for almost everyone-including those with no idea what caviar actually is. For it has been said that those who respect Caviar’s place in the elite of epicurean treats far outnumber those who have actually tasted it. Many who do have a chance to sample the delicacy can only wonder why it is so prized. But, as any connoisseur can testify, Caviar is an acquired taste that for reasons of the pocketbook is best not acquired. 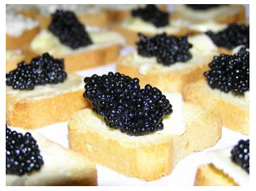 What is Caviar exactly? Caviar is the prepared roe, or eggs, of the acipenser, a fish found in the Caspian and Black Seas, and the Girond River in France. At one time, the acipenser could be found in many European rivers, and even in some North American lakes; but since the onset of the industrial age the fish’s habitat has been reduced to portions of Russia, Iran, and Rumania. Today, virtually all Caviar is produced in those three countries.

There are three kinds of acipenser that most graciously donate their eggs for the benefit of man’s palate, and thus there are three kinds of “true” caviar. The Beluga is the largest fish of the three, growing up to twelve feet in length and weighing up to a ton-the Beluga is obviously no sardine! One Beluga can produce up to 130 pounds of caviar. Another species, the Sevruga, is much smaller; four feet long and weighing sixty pounds, the Sevruga can produce only about eight pounds of caviar.

The Ocietrova, or sturgeon, may weigh up to 400 pounds and will produce about forty pounds of caviar. The term “sturgeon” is often applied to all three kinds of Caviar-producing fish, but the Ocietrova is, in fact, the only true sturgeon.

The taste for Caviar flourished in the Middle Ages, when sturgeon roe was prepared as a feast for kings. The Cossacks of Russia organized massive caviar-hunting expeditions twice each year, with every member of the community taking part in the two-week campaigns. Among other things, the Cossacks used cannons to stun the fish in the water!

Today, the gathering of roe is somewhat more scientific. The fish live in the salt water of the Caspian and Black Seas but spawn in fresh water, depositing their roe at the bottom of river beds. The fish are caught as they prepare to spawn: the roe, at that time, is barely edible.

The captured fish are placed in submerged floating cages, where due to the lack of food, they are forced to use up the reserve nourishment stored in their roe. When the roe is fit for consumption, the fish are killed and the eggs extracted.

The roe is then pressed through a sieve to remove membranes from the eggs, and then steeped in a brine solution. The production of Caviar requires only fifteen minutes, but must be carried out with great skill.
The best Caviar is sold by weight. Some Caviar is poured into linen bags and hung to drain after steeping, then sold in tubes as “pressed Caviar.”

The best Caviar is slightly salted, and extremely nourishing. Malossol caviar contains up to 30 percent protein. Due to its salt content, caviar will remain fresh for a long time. But never place it in a freezer or you’ll end up with a worthless lumpy broth!

The roe of various fish have been enjoyed as a delicacy by the rich for thousands of years. “Red Caviar,” however, is a cheap imitation made from salmon roe. The Roman emperor Heliogabalus maintained a fleet of fishing boats exclusively for obtaining eel roe. The captured eels were placed in tugs and fattened on the meat of Christians slain in the Coliseum.

The French have been connoisseurs of Caviar from medieval times on. Rabelais speaks of the delicacy in Pantagruel, calling it caviat. He also mentions bourtargue, a kind of Caviar made with red mullet roe.

In Shakespeare’s day, Caviar was recognized as a food for the more discerning, as Hamlet suggested when he said: “The play, I remember, pleas’d not the million; ‘t was caviare to the general.” In other words, the play, like caviar, was pleasant only to a trained palate.

The Czar Alexander I is often credited with introducing Caviar to the social elite of Paris. The word “Caviar,” however, is not Russian in origin (the Russians call it ikra), but comes from the Italian caviola, derived from the Turkish word khavyah.

Today, you can expect to pay anywhere from four to ten dollars for an ounce of the prized delicacy-and an ounce is considered scarcely a portion.

Until recently, about 35,000 pounds of fresh Caviar were consumed yearly in the United States; a current Caviar shortage has reduced American consumption to 20,000 pounds. Sixty-five long tons of Caviar are imported into the United States from Iran each year, and the total American retail market for Caviar is $6 million annually. But if the treat is beyond your pocketbook, or if you’ve already tried caviar and have been ashamed to admit that you can’t stomach it, take heart. The epicurean chronicler Thomas Mouffet had this to say about the costly treat: “As for Caviar, or their eggs being poudred, let Turks, Grecians, Venetians, and Spaniards celebrate them ever so much, yet the Italian proverb will ever be true: Who eats caviar eats flies, dung, and salt.”

2 thoughts on “What is Caviar?”