How are Buildings Demolished and Recycled?

An excited hush falls across the deserted tower block. Neighboring residents look on as the police helicopter overhead double-checks that the exclusion zone is clear. The countdown reaches zero and the button is pushed. An explosive shockwave ripples through 1,500 separate charges, shattering the supporting concrete columns. With surprising grace, the huge 24-storey tower block folds downwards into a billowing skirt of dust.

The mere seconds it takes for the building to come crashing down might be the only part that makes the local evening news, but the real work can extend for months before and after the big bang. Mark Coleman is the managing director of Coleman & Company – one of the UK’s leading demolition firms. In an exclusive interview, he talks us through the key stages in the high-rise demolition process. 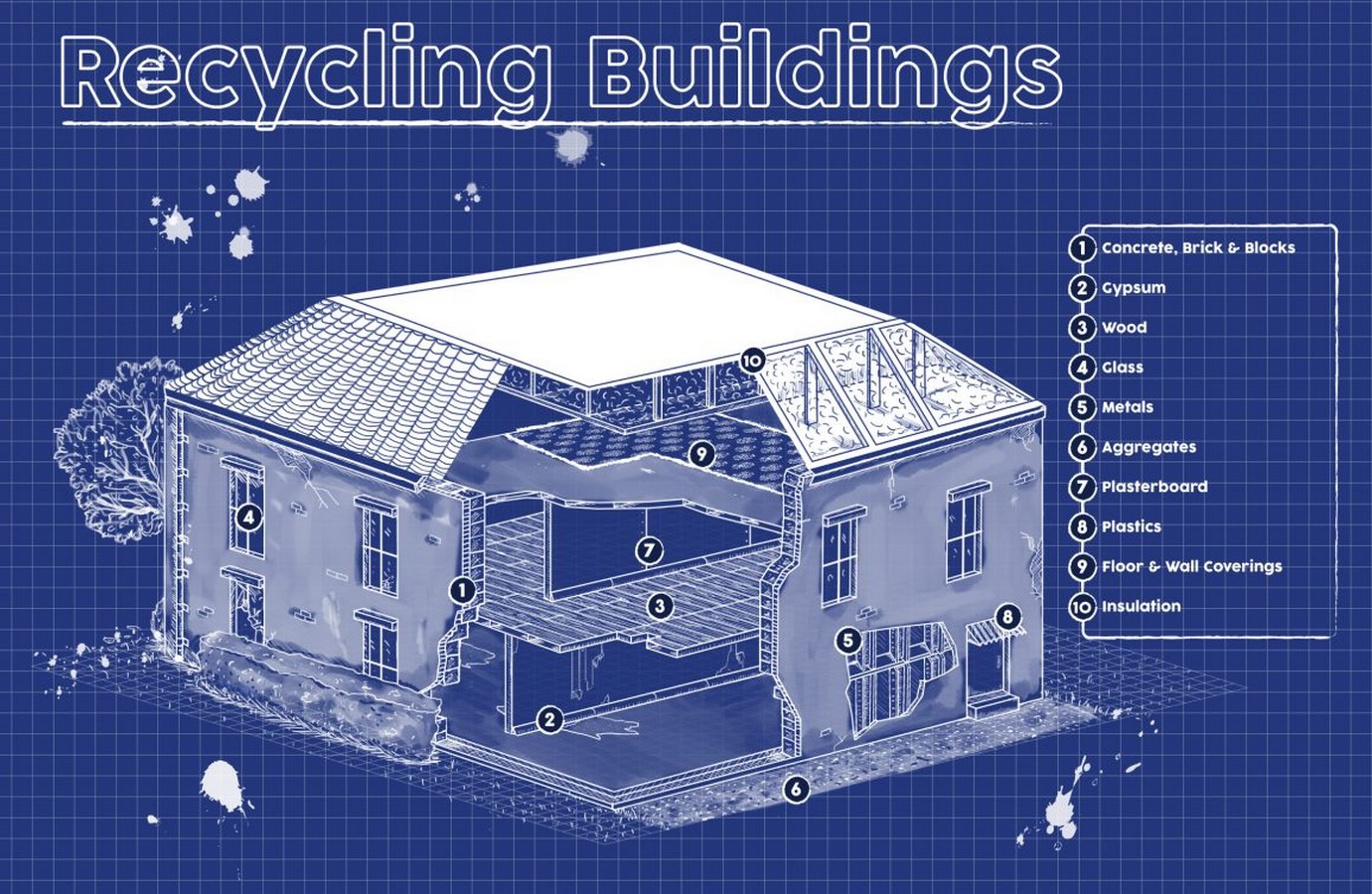 Work begins by stripping the building completely. Specialist contractors remove toxic materials, such as asbestos. Furniture, fitted cabinets, electrical wiring, plumbing, flooring and even the windows and plasterboard panels are all taken out as well. In fact, Coleman & Company aims to recycle as much as 98 per cent of a building during the demolition process, and it’s much easier to do that before it is reduced to rubble. “We don’t even throw settees in the skip any more,” says Coleman. “We take the fabric off and that gets shredded, we strip the wood, that gets recycled and any metal in there goes into the scrap metal skip.”

Once the building has been reduced to a concrete shell, the next six to eight weeks are exactly do we recycle giant buildings? spent ‘pre-weakening’ the structure. “This does two things,” Coleman continues. “One, it allows you to get access [for the explosive charges], but two, it also allows you to use fewer explosives to collapse it. Typically, you remove 1.5-metre (4.9-foot) rectangular arches out of a wall and then try to demolish the next two to three meters of concrete by the use of explosives. BS5607, which is the British Standards code for the Safe Use of Explosives, says you need to minimize the amount you use, so you’re not blasting the hell out of it and sending concrete flying all over the place.”

The type of explosive used depends very much on the building. A tower block is a relatively weak structure, held up by simple reinforced concrete pillars. These can be destroyed using detonating cord. This resembles coaxial TV aerial cable, but the core s filled with PETN (pentaerythritol tetranitrate) high explosive. This ‘det cord’ is used as a high-speed fuse for large jobs; it burns at about 7.2 kilometers (4.5 miles) per second, but for tower blocks it has enough explosive power to get the job done by itself. “When you start moving into bigger, more industrial structures – eg power stations and heavy concrete or steelwork – it’s a different ball game altogether,” explains Coleman. “You are now into shaped, cutting charges. You use these to induce failure in the already pre-weakened section – to blast out the remaining piece that’s holding the whole thing together.”

While the drilling and pre-weakening is going on, arrangements have to be made for the nearby residents. “Typically on an inner city site, you can be evacuating a few hundred properties and catering for a few thousand people on the day, so it’s a bit like a military operation,” says Coleman. “You have to survey and contact each of the properties for any issues such as security and pets. We have to create a safe, sterile environment, which is generally [equivalent to] three times the height of the structure. So, say, if you have a building that is 50-70 meters [164-230 foot] high, you are talking about an exclusion zone in the region of 150-200 meters [492-656 feet].

“Generally, we try to negotiate our way through it without money changing hands. So if you’re close to the structure, we’ll put you up for the weekend at a hotel. If you’re not too close we might look at other proposals, such as locking you into the building and putting a policeman outside. It’s all about finding [the safest] process. If you’re standing within a few meters of the building you’re going to get squashed, but if you’re 50 meters [164 feet] away you’ve got no problem.”

A week or two before the day of the demolition, the detonating cord is fed into the holes and grouted firmly in place. This improves the detonation efficiency as the expanding gas from the explosives has nowhere to go and the force is concentrated into the concrete wall.

But it also prevents the explosives from being stolen by opportunist thieves or terrorists. There is no risk of accidental explosion without the detonators, but to be safe the ground floor of the demolition site is still guarded around the clock by specialist security teams.

Demolition day itself is nearly always on a Sunday to minimize the disruption to local traffic and businesses. Around 5am, workers begin surrounding the perimeter of the demolition exclusion zone with security fencing. “Around the fence zone we have sentries, and they all have to have a line of sight between each other so they can maintain visual security of the zone in the event of the radios not working,” Coleman explains. “Each sentry will have a police officer with them, so if there is a breach the police will deal with it.”

The spider’s web of detonation cord laced through the building is brought together into bunches at strategic points, and at about 7am, the explosives engineer begins attaching the detonators to each bunch. Even at this point, key connections are left open in order to ensure absolute safety: “They wait there ready until the team can say, guaranteed, everyone is out. Then we’ll start a ten-minute countdown, with a series of final connections carried out in the last few minutes. There’s a series of horns that sound to keep everybody alert. There’s an electric atmosphere in the air and a deathly silence falls.

“When we’re doing the countdown, we’ll count from 20 down to ten, and that will be audible over the radios, then you’ll hear a shot go, which we use to frighten any birds out of the building. And then everyone will think ‘What’s happening?’ But we’ve actually started the real ten-second countdown; the purpose of the radio silence is that in those crucial seconds, if someone needs to [stop the blast], all they need to do is say, ‘Abort!’.”

Incredibly, it takes between just three and five seconds for a 45,000-ton tower block to crumble down into a pile of rubble. Once the dust has settled, the explosives engineer inspects the debris to be certain that all the explosives detonated. Next excavators and street-sweeping machines and workers with brushes and brooms move in to clean up the surrounding area, and the neighboring residents are allowed back into their homes. “Then we lift the fencing and go off to the pub for a couple of pints,” says Coleman. “After that we come back for typically about 12 weeks to munch up all the material and remove it from the site. Once it’s all been taken away and we have exposed the slabs of the foundation, they are then broken out, processed and removed, and the void is backfilled and ready for the house builders to take over the site.”