How are Thousand-Year-Old Eggs made and Where do Thousand Year Old Eggs come from?

Thousand-year-old eggs, called pidans in Chinese, are a tongue in cheek eggsaggeration. Less lyrical Chinese may call them hundred-year-old eggs. Truth be told, however, they’re only about a hundred days old, which may strike you as bad enough.

Here’s how they’re made.

Take a fresh duck egg in the shell, plaster it all over with a thick coating of a paste made of salt, lime (from a garden-supply store), pine ashes from your fireplace (or charcoal-grill ashes, if that’s all you have), and strong brewed black tea, all thatched together with rice straw or even grass clippings. 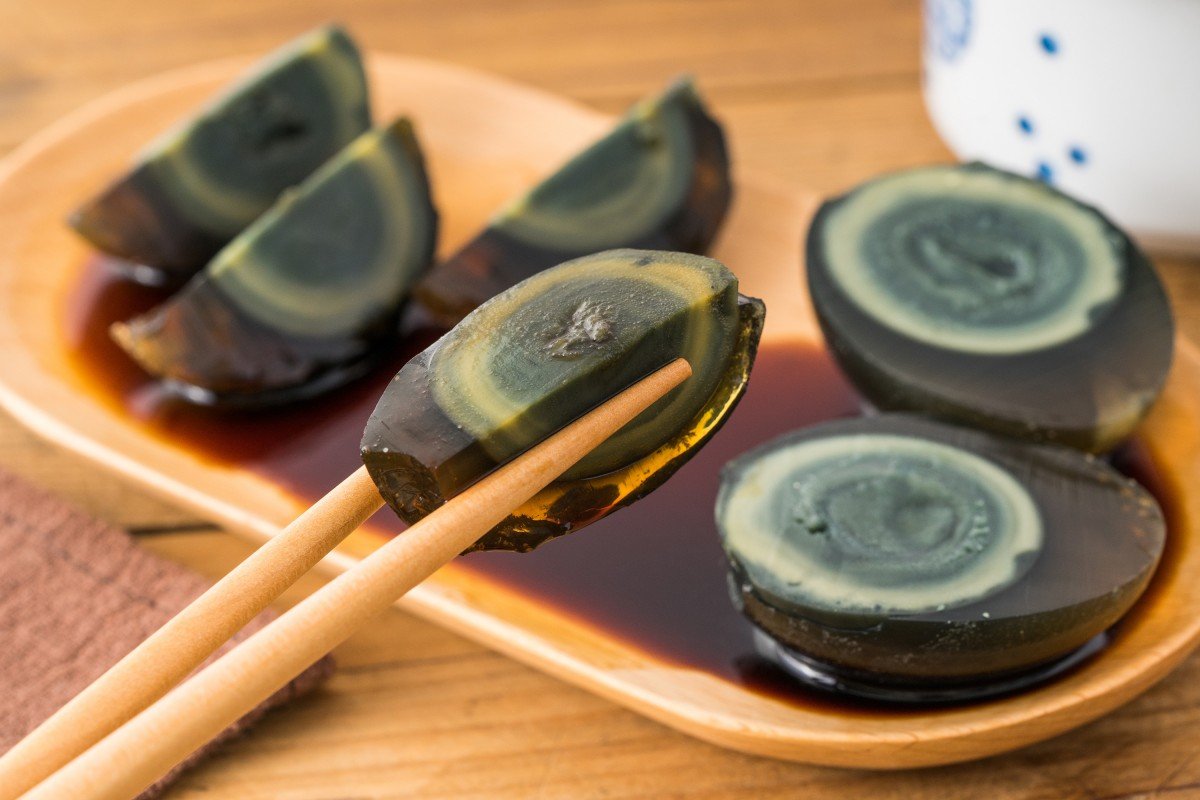 Now bury the thing in your garden for about three months. Dig it up, wash it off, remove the shell, and enjoy it with soy sauce and chopped ginger as an appetizer—despite the fact that it looks like a de-appetizer, with its dark green yolk and its blackish-amber “white.”

I know whereof I speak. Several years ago, when I was sailing around the world on a Taiwanese ship, I was invited to the captain’s quarters for dinner. He had his own private chef, who prepared a dazzling variety of unusual (to me) Chinese delicacies, including shark’s-fin soup, sea cucumber (also known as sea slug), pigs’ stomach linings and ovaries, and one of those eggs of uncertain age.

It had a pungent, cheese-like flavor, the creamy texture of an avocado, a greenish-black yolk and a mottled blue, black, and amber-colored “white.” It wasn’t half bad, although I don’t think I’d want one every day for breakfast.

Note that I have written this entire section with only one pun on the word egg, even though you may have eggspected me to take an eggstraordinarily eggcessive eggscursion into the realm of eggsotic and eggstremely eggsaggerated puns until you were completely eggsasperated and eggshausted.

But I hope you can take a yolk.

The changes that take place in a “thousand-year-old egg” are caused primarily by the lime and the wood ashes, which are both rather strongly alkaline. (Lime is calcium oxide, CaO, and wood ashes contain potassium carbonate, ICCO3 .)

Over time, these alkaline substances infuse the tea, which seeps through the shell and acts on the proteins in the egg white, reconfiguring their molecules similarly to what cooking them would do. In the meantime, some of the normal chemical changes that take place in a, shall we say, “mature” egg yolk are also taking place, producing chemical products such as aldehydes and ketones, which are responsible for the sharpest of the flavors.