How did the Fire Department put out the San Francisco fire of 1906?

The terrible tragedy is they didn’t put out the San Francisco fire of 1906. The fire raged for three full days, devouring all in its three-mile path, razing the city, leaving hundreds of thousands homeless and helpless.

At 5:13 A.M. on April 18, 1906, the San Andreas Fault shifted and heaved with enough force to buckle the streets of San Francisco, shatter her mains and sewers, fell power lines, and turn buildings to rubble. Two lesser earthquake shocks followed the first.

By then the city’s electrical wires had touched off an inferno. People fled their beds and rushed into the streets, screaming, crying, or gazing about, stunned, wondering if they could still be dreaming. All electricity was cut off; Western Union shut down; all transportation halted. 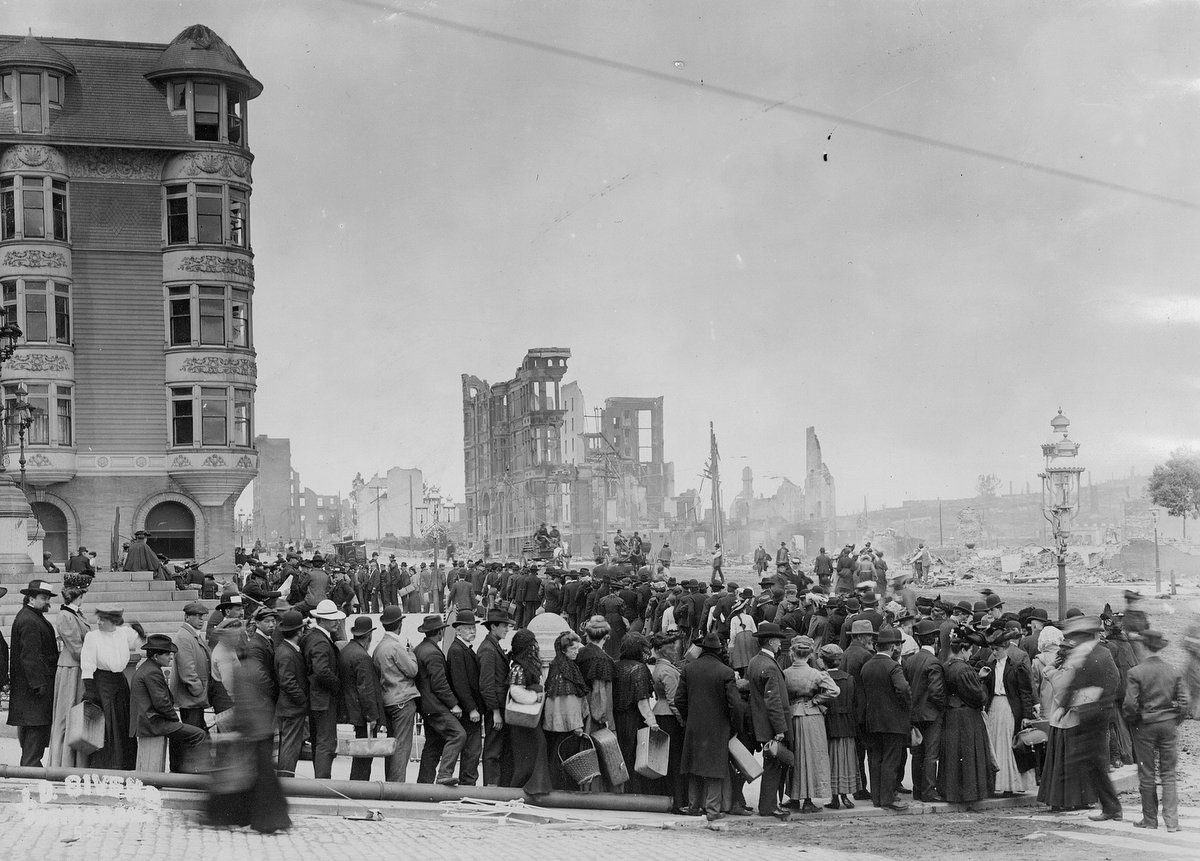 Rich and poor alike streamed through the streets beneath a cascade of bricks, cornices, and corners of buildings. The $7-million city hall collapsed; the new post office was shattered; the entire south side of Market Street from Ninth Street to the bay was ablaze. Here stood the city’s prized Grant, Parrott, Flood, Examiner, and Monadnock buildings, along with the majestic Palace and Grand hotels.

Commercial buildings north of Market Street also succumbed, and at the Opera House the lavish scenery and costumes of the visiting New York Metropolitan Opera fueled the flames like newspaper in a campfire. There followed a deafening blast as the gas house exploded and at this, reported The New York Times, “a feeling of despair overcame the men who were performing the rescue work.”

Although most of the city’s fire alarms had failed, the corps of 600 fire fighters had gone to work immediately. But the extent of the fires, the speed with which they spread, and the shortage of water everywhere except along the bay front were insurmountable obstacles. Firemen resorted to dynamite to create firebreaks, and for several days interminable blasting added to the mayhem. But the tumbled buildings only caught more easily, the fire lashing through the kindling and streaming out of windows.

Infantry, cavalry, and police, several thousand strong, patrolled the streets under strict orders from the governor and commanding general to shoot down vandals on sight. Thirty-five were shot and killed trying to loot the ruined United States Sub-Treasury on Commercial Street. Chief of Police Doonan ordered all saloons closed to prevent drunks from becoming unwitting targets. The entire city was placed under martial law.

On April 20 The New York Times headline read: BOMBARDMENT A MILE LONG FAILS TO SAVE SAN FRANCISCO. MANSIONS WRECKED BY CANNON IN LAST STAND ON NOB HILL. An artillery stand against a natural disaster seems peculiar and even pathetic, but that was the only course the forces in San Francisco could pursue. While thousands huddled in the parks, hungry and terrified, the fires roared and shells boomed. Cannon fire destroyed the beautiful homes east of Van Ness Avenue and a mile of buildings along the avenue, creating a 500-foot-wide swath that was generally successful in stopping the fire, although flames leaped across at certain points.

Meanwhile, the gusty winds kept shifting and the fire reached the luxurious abodes of Nob Hill. At the “fireproof” Hotel Fairmont, sailors assisted the firemen and made citizens work at gunpoint. Finally, the last remaining barrels of gunpowder in the area were called in from the Presidio, Fort McDowell, and Alcatraz. The millionaires from California’s Gold Rush bonanza trickled out on the streets to watch the cannons take aim at their mansions. These palaces with all their furnishings were shot to ruins.

Eventually the fires in the Nob Hill and Telegraph Hill areas and the Mission district turned back on themselves and burned out. Little remained except the skeletons of some new steel buildings, a portent for the future.

The 21st of April brought rain to the smoldering ashes of 25,000 buildings. Nearly five square miles of the city had been destroyed in three days, with property damage running about $400 million. Total loss of life was never confirmed; estimates range from 300 to 600.

The survivors faced the overwhelming challenge of rebuilding, which they met with commendable spirit and success.