Flying fish are a family of marine fish called Exocoetidae with about 64 species that can be found in oceans all over the world, and common in tropical waters. 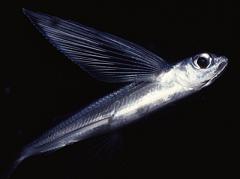 The scientific name Exocoetidae comes from the Greek ‘εξωκοιτος which means “sleeping under the stars”, and described some flying-fishes believed to leave the water to sleep on the shore.

Flying fish are incredible animals, capable of leaping out of the water and flying hundreds of feet over the ocean at a speed of about 35 mph.

They do this when threatened or freaked out by faster natural predators such as tuna, bonito, and marlin and want to escape immediate danger in the water, although it also increase their chances of being eaten by seabirds. But are they really flying?

Technically, most of the 50 species of flying fish glide, although they do have a groovy trick that can keep them airborne for much longer, they swoop down, slip only their tails into the water, and with a swift flick, propel themselves up and away again.

Not all species can perform the trick, just a few flying fish.

Slow-motion film has revealed that a few exceptional species truly do fly, including the South American hatchet fish and the freshwater African butterfly fish. Both flutter their winglike fins to stay aloft.

Since they can’t actually breathe out of the water, you don’t see them flying south in formation, but they do fly nonetheless.