How did Wombats get their Name and Where do they Live in Australia?

The Wombat is not a bat at all, but a short-legged, muscular marsupial with a very short tail that lives in south-eastern Australia and Tasmania. 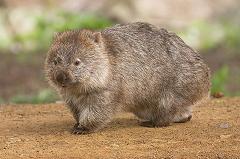 The Wombat’s name comes from the Eora Aboriginal people who were the natives of Sydney, Australia.

A backwards pouch which helps keep the dirt out while digging makes the Wombat unique from other marsupials. Wombats are herbivores and have a very slow metabolism which matches their slow movement, but can run fast if threatened.

Wombats defend their burrows aggressively against intruders, fighting back with their hind legs.

A wombat is the common name for three different species of burrowing Australian marsupials, the largest of which can grow up to three feet in length. They superficially resemble what you’d get if you crossed a guinea pig with a stocky little dog.

Wombats are both loved and hated by the humans who coexist with them. They’re loved because they tend to be docile and easily domesticated, so some people keep them as pets.

However, they’re hated by farmers, who believe that the little burrowers do damage to their crops. Although it’s true that wombats deserve a share of the blame for eating some crops, it’s likely that rabbits are doing the bulk of the damage.

Regardless, as a result of competition with rabbits, the efforts of farmers, and damage done by cars, in some areas of Australia the wombat has been all but eradicated.

Wild wombats are now considered an endangered species and their predators are Dingos and Tasmanian Devils .