How do Art Conservators restore a valuable painting that has deteriorated with age?

Many of us are unaware that modern paintings as well as those of the Old Masters must be cared for periodically.

If you have an oil painting in your home that has been subjected to smoke or intense light from a southern exposure for 10 or 20 years, the colors may have darkened gradually, the varnish yellowed or deteriorated, the canvas itself became flaccid.

Extreme temperature changes also may be harmful, causing the painting to expand and contract and the varnish to crack. Over the years oil paints oxidize and grow increasingly hard and rocklike. A lump of paint might actually lose cohesiveness and come loose from the painting. 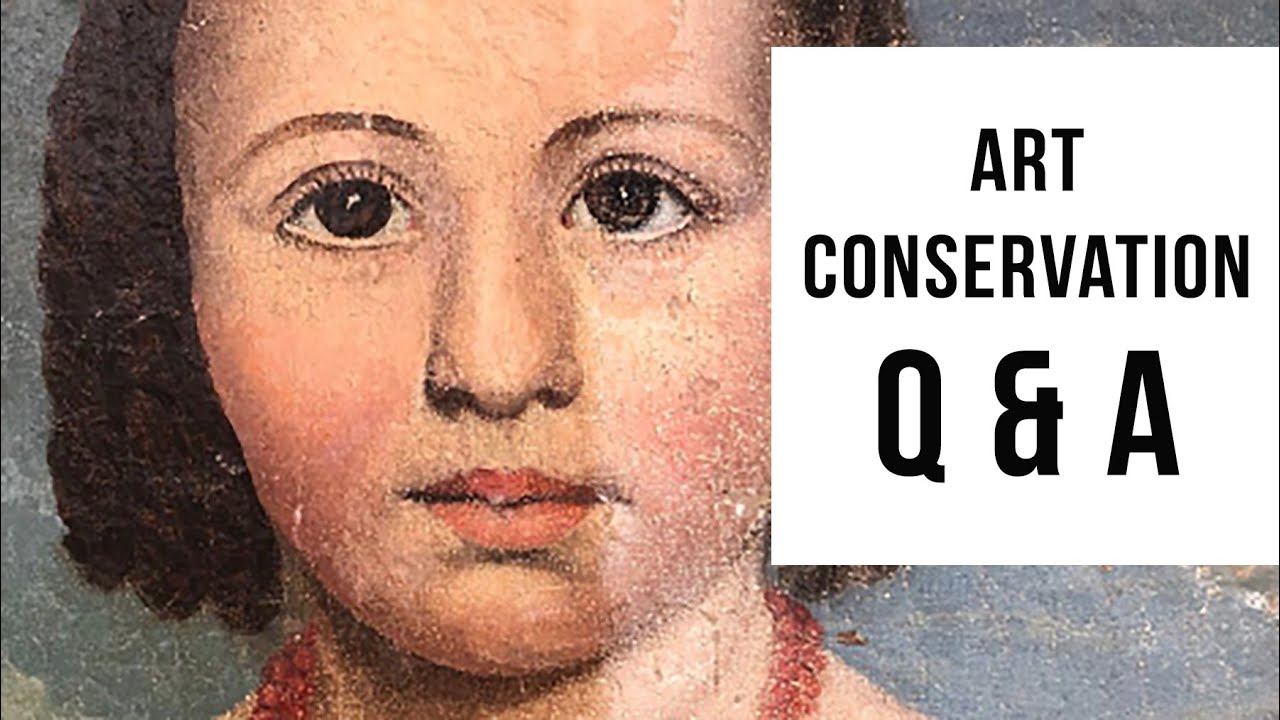 Within the past 150 years the conservation and restoration of paintings has become a serious concern of specially trained professionals, rather than a task occasionally carried out by the original artist, or a later artist who felt he could improve upon the original.

Frans Hals and Jan Gossaert are among the artists who felt free to restore the paintings of others, which often meant changing certain details of the picture. This procedure was not frowned upon or considered an intrusion in the seventeenth and eighteenth centuries. Today, of course, we would all be horrified if a masterpiece were altered by restoration or conservation, and conservators always take extensive photographs of the art in question before beginning to work, just to protect themselves from such accusations.

Restoration nowadays is as much a science as an art, using such scientific aids as photomicrography, infrared rays, X rays, and spectrophotometry, as well as the restorer’s intimate knowledge of pigments, canvas, and varnish. (Professional conservators are in fact divided about how scientific they ought to be: European restorers accuse the Americans of being scrupulously scientific to the point of being cold and unfeeling. Our method of laying a painting down flat and going to work with chemicals and scalpels goes against their tradition of inspired art.

Dana Cranmer, a skilled conservator at the Guggenheim Museum in New York City, explains the difference between conservation and restoration: “Restorers concentrate on appearance and cosmetics, whereas conservators are concerned primarily with the health and longevity of a painting.”

Periodically she actually washes the museum’s paintings by a slow and painstaking method. Using small swabs of cotton wound around a little wooden stick (the instrument resembles a Q Tip, although the cotton can, and must, be changed frequently) and working systematically in a grid pattern across the painting, she wipes away the old layer of varnish from the painting with the aid of various solvents such as petroleum benzine, toluene, and acetone.

If the work doesn’t have a protective varnish, she cleans the pigments themselves, using cotton swabs dipped in distilled water. After the cleaning process, a new layer of varnish is applied (to those paintings that had varnish previously). The Guggenheim uses synthetic varnishes which can be sprayed on with a spray gun, rather than the older natural resins such as dammar or mastic, which are painted on with flat brushes. Applying the latter is a tricky procedure, for irregular brushstrokes can cause a change in the reflectance of light, which alters the appearance of the painting, whereas too much varnish levels out all nuances of light and shadow.

Another standard task of the conservator is to reinforce the canvas, which inevitably sags with time. This is accomplished by placing a new liner on the back of the canvas. Relining is also a useful technique for preventing deterioration and blistering in old paintings.

The risk involved may be considerable, however, as was the case with Anthony Vandyke’s Rinaldo and Armida, which was restored in the late 1950’s. There was an area in the front where a paint layer had separated in small cleavages from the old supporting fabric. Conservators feared that when they scraped away the old adhesive from the back, using small knives, the paint would crumble and come loose. But, after much debate, they faced the painting with thin mulberry paper and a layer of cotton gauze and proceeded with the task of relining.

Some conservators use the traditional method of affixing a new liner with an electric iron, but the Guggenheim has a special “heat table”, a table covered with an aluminum sheet that can be heated, for precisely this purpose.

The painting is placed face up on the table, and the new liner, coated with an adhesive, is put in place beneath it. A protective sheet is spread over the face of the painting. Finally, a plastic sheet is laid on top and a vacuum created between it and the painting by means of a vacuum pump. The painting lies under even pressure for approximately an hour, usually at a temperature of 160 degrees Fahrenheit. (Tests are performed beforehand on tiny sections of the painting to determine its heat tolerance.) The heat activates the adhesive, which then holds solidly to the canvas as the painting cools for three hours. Next it is stretched on a stretcher, a wooden frame with movable joints. This type of frame is very efficient for adjusting the tautness of the canvas, but partly because of high cost, most artists simply use strainers, frames without adjustable joints, to frame their work.

A painting with chipped or cracked paint requires specialized care. Retouching is an extremely taxing procedure that draws on the artistic capabilities of the restorer. How could anyone dare take a brush to a Vermeer? One consolation is that all restoration, and particularly repainting, is reversible.

If a chip of paint is missing, the conservator or restorer uses a method called inpainting. First the spot to be repaired is coated with varnish. Then it is filled to the perimeters of loss with gesso or putty, usually the same material as the ground of the painting (the preparatory layer originally used to prime the canvas).

Using very fine pins or scalpels, the restorer sculpts the gesso to match the contours of the surrounding paint. When this is dry, the area is again coated with varnish and at last painted with watercolors (some restorers use egg tempera followed by a glaze of transparent oil paint). As one can imagine, mixing the watercolors to match not only the precise color but also the tone of the oils is an extraordinary feat. Although a restorer might come upon it in an hour, the same task could take a week. All inpainting, being of a different material and age than the surrounding paint film, inevitably discolors and must be renewed periodically, usually every century.

How does the restorer know what color to use if the painting is very old and has faded or darkened over the centuries? Removal of the varnish is the secret, for it is the varnish that changes, not the pigments. A look at the exquisite, often brighter pigments that appear when varnish is removed has led many conservators to believe that the Old Masters did not, in fact, intend their paintings to have that old, sepia like appearance, which became so valued by later generations.

Occasionally great paintings have been damaged to a degree that seems irreparable. In 1914 Velasquez’s The Toilet of Venus was slashed by a brazen suffragette, outraged at Venus’s provocative pose. Rembrandt’s Night Watch was first cut by a maniac in 1911; in 1975 a mental patient rushed into the Rijksmuseum in Amsterdam and slashed the painting with a knife. There were a dozen cuts and scratches, some more than a yard long, and a triangular piece of canvas actually fell out completely.

The museum’s chief restorer, Luitsen Kuiper, organized and carried out the massive task of repairing the painting, which took six months and cost $37,300.

Immediate measures were taken to prevent the edges of the canvas from stretching or sagging: the missing piece was repositioned and held with transparent tape on the back, and the front was strengthened with Japanese rice paper and glue. Next the lining, which had been put on in 1947, was removed with small knives. Kuiper then had to bridge the cuts with many small linen fibers. One by one the threads of the canvas were pasted to the short linen fibers with glue and synthetic resin. Extra fibers were shaved away. Kuiper then applied a beeswax and resin mixture and ironed on the lining with flatirons. Next the rice paper and glue residue (which looked alarming) had to be removed from the front with alcohol.

In order to retouch, Kuiper had to remove a layer of varnish that had been applied in 1947. He didn’t stop there, however, but went on to remove a much older layer of varnish, while many around him fretted that the paint would come off, too. As he worked, he discovered some areas of overpainting, apparently executed by another artist in the eighteenth century. (Rembrandt had completed the painting in 1642.) Throughout, extensive examination of the painting’s structure and areas of damage were made with X rays, infrared photographs, and a stereomicroscope (a microscope with a set of optics for each eye, which allows an object to be viewed in three dimensions).

Kuiper treated the entire painting with oil of turpentine to create “an even glimmer,” and finally he began the arduous job of retouching. Tinted chalk and glue were used to build up the ground where the paint was slashed.

Then Kuiper mixed his paints, using more colors than had Rembrandt, who required only six to ten. Kuiper used oil paints on top of a wet varnish. When the paints had dried thoroughly, he applied a final coat of varnish and allowed it to harden behind a glass, which protected the painting from climatic changes, for a full eight months. The results of the restoration are outstanding; art historians, restorers, and the general public who inspect the painting come away duly impressed.

Every now and then restoring a painting entails taking away paint rather than adding it. In the mid sixteenth century Agnolo Bronzino painted An Allegory: Venus in all her natural splendor lies in the woods surrounded by naked Cupids with their curvaceous bottoms in full view. Some 50 to 200 years later a more modest generation decided to veil the nudity, cover Venus’s nipple, and place bushes in “appropriate” places.

The overpainting was detected much later, and some fortunate restorer had the happy task of stripping away Venus’s veils.