Unlike true big cats, the cheetah can purr as it inhales, but cannot roar. 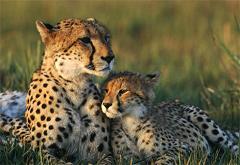 By contrast, the big cats can roar but cannot purr, except while exhaling.

There’s no such thing as a cheetah’s roar, since cheetahs don’t roar.

They do, however, purr like a kitten, hiss, whine, and growl.

And when they want to deliberately draw attention to themselves, they make a birdlike chirping sound.

The cheetah is still considered by some to be the smallest of the big cats, and it is often mistaken for the leopard.