Cheetahs are currently on the US Endangered Species Act, and listed as a threatened species. 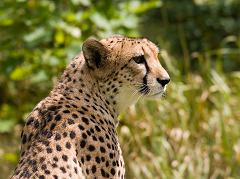 Cheetah cubs have a high mortality rate because of genetic factors and predation by carnivores in such as the lion and hyena.

Recent inbreeding of cheetahs that cause birth defects have led a few biologists to believe it is unlikely to survive as a species.

About 12,400 cheetahs remain in the wild in twenty-five African countries.

Although they are capable of running up to 71 mph, even the fastest land animal on Earth can’t outrun the effects of sharing the world with humans.

Cheetahs are nearly extinct in Asia, Libya, and India, where they were once trained by humans as hunting animals, and they are officially endangered in tropical Africa.

3 thoughts on “Why are Cheetahs an Endangered Species and How Many Cheetahs are Left in the Wild?”