How Do Flies Walk on Ceilings?

The amazing but deadly little insect we know as a house fly actually has a remarkable body. 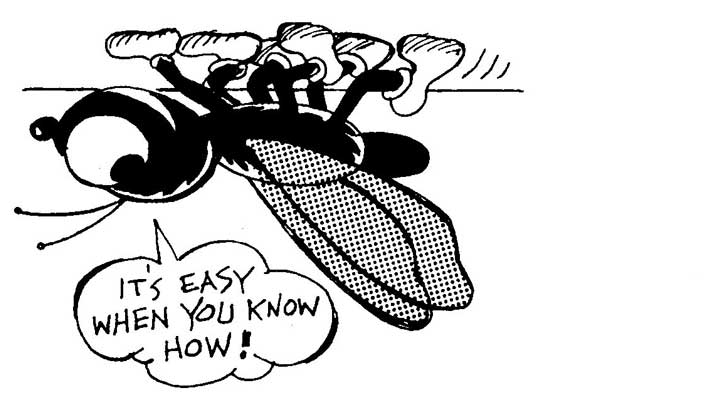 Even though that body is responsible for spreading diseases, it is so wonderfully made and can do such unusual things that it is an insect to be marveled at.

Most amazing of all is probably the house fly’s three pair of legs which are attached to the middle section, or thorax, of the fly’s body. Each leg is divided into five parts; the last part being its foot.

On the underside of each foot are two tiny claws on which the fly walks in a tiptoe manner. Under the claws are pads which give off a sticky liquid. It is these sticky pads which cling to the surface on which the fly is walking. In that way, the fly is able to walk up walls and upside-down on ceilings without falling off.

However, these same sticky pads which help the fly move about with ease are also what make it such a deadly insect.

For the garbage and sewage on which flies land are full of the bacteria that cause many deadly diseases, including tuberculosis, typhoid fever, and dysentery. These bacteria cling to the sticky pads as the fly travels. When it lands on food people eat, the bacteria are spread.

The bristling hairs covering the fly’s entire body, including its legs, also serve as carriers of these dangerous bacteria.

During its entire life, a house fly never travels more than a few hundred feet from the place where it was born.