How do piano tuners tune a piano using a tuning fork and intervals?

When a piano tuner arrives at your house, all he needs is a tuning fork, a crank, a damping wedge, and a finely trained ear.

He sounds the fork simply by tapping it and causing it to vibrate. The sound produced is the A above middle C, the first note to be tuned in the central octave of the piano.

The standard pitch of this A, throughout the Americas, Europe, and the Soviet Union, is A 440. The number represents the frequency of the pitch, or how many times (cycles) per second the string vibrates back and forth when struck. 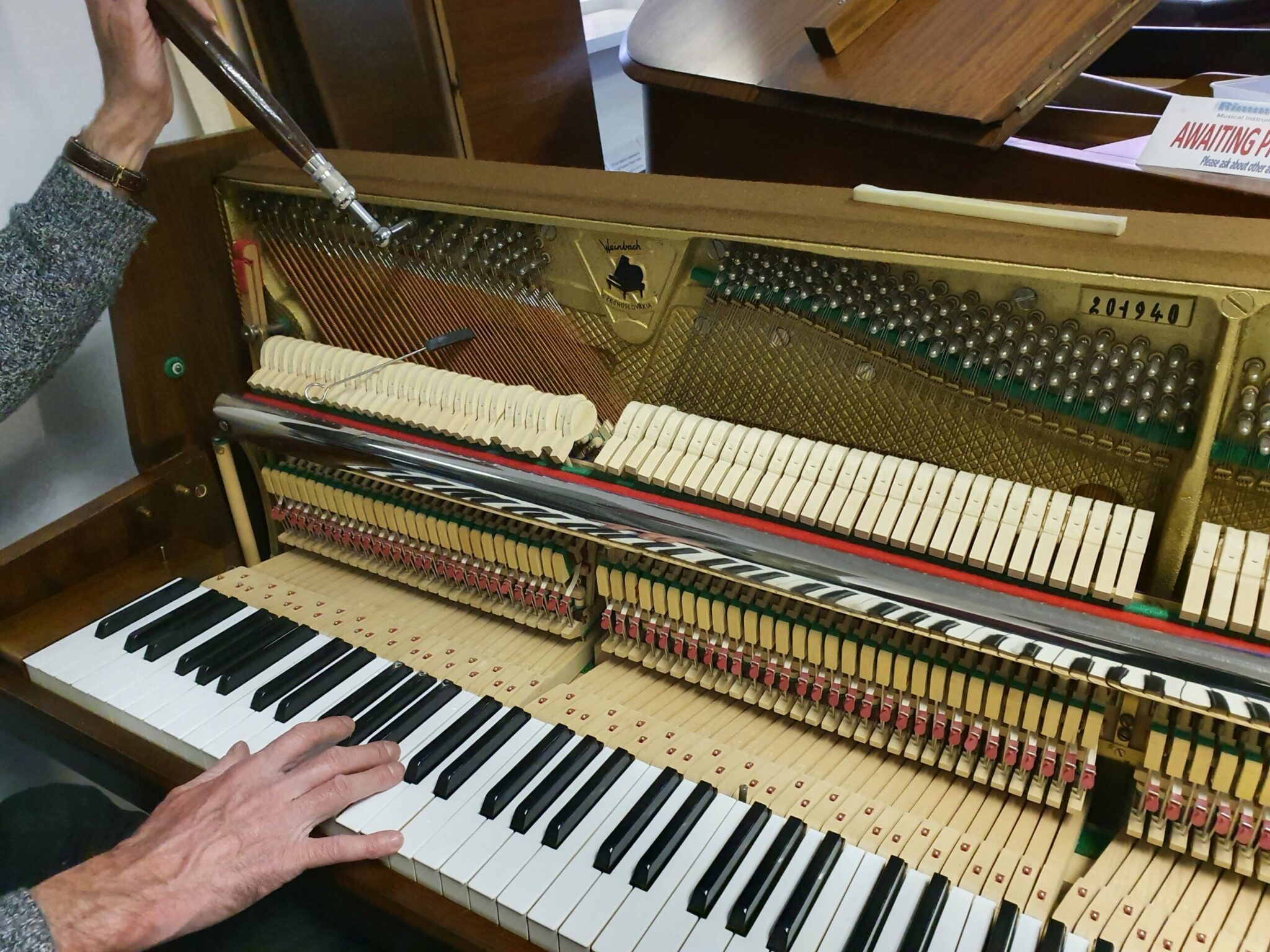 Since the pitch of a single key on the piano is actually generated by three strings (except in the bass, where each note has only one string), the tuner uses a felt wedge to dampen (deaden) two strings of A while he plays the note and listens to hear whether or not it’s in tune with the fork.

If the two pitches are close but not precisely the same, he’ll hear a series of pulsations, or beats, arising from the discrepancy in frequencies. The farther apart the pitches of the two notes, the more rapid the beats. As the notes are brought in tune, the beats slow and eventually stop.

The pitch of a string is determined by its length, so the tuner adjusts this length by turning with his crank the wrest pin that secures the string. When the left hand string of A has been tuned precisely to 440, the tuner no longer needs the fork. He moves the wedge and tunes the other two strings of A to the corrected first.

The remaining notes of the central scale are then tuned by interval (the distance between two notes: A to B is a second, A to C is a third, and so on).

The most usual sequence starts with the fifth below A (D), then proceeds with the fourth above D (G), other fifths and fourths within the octave, and then the thirds, until all twelve notes of the octave are brought into their proper relationships with one another. One string at a time, the tuner eventually tunes every string on the piano, a total of 235. This number varies because some pianos have more bass strings than others.

You might assume that your piano is being tuned perfectly, but if it were, it would grate on your ear and in places seem drastically out of tune. On a well tuned piano, each note is actually slightly out of tune with the others, yet the modern ear (since the time of Bach) has become totally accustomed to the “errors,” so that this tuning sounds correct.

As irrational as it may seem, when the notes of a scale are tuned to be acoustically correct according to the pure system worked out by Pythagoras, certain keys and small ranges of tone are perfect, but others, especially chromatic tones, sound terribly wrong. The solution, based on systems devised more than 250 years ago, is to divide the octave into twelve equal semitones and to spread the discrepancy evenly over the semitones. Ultimately, no interval except the octave is acoustically correct. This system underlies Bach’s famous Well Tempered Clavier, the forty eight preludes and fugues, one for each major and minor key, which can be played equally well in every key.

When a piano is tuned in modern fashion, to “equal temperament”, each fifth must be flattened (lowered in pitch) by one fiftieth of a semitone, or two “cents.” The tuner knows the proper discrepancy exists when he hears one beat per second when tuning the fifths.

With other intervals the discrepancy is greater. The tuner knows to listen for faster beats with progressively smaller intervals. An equal tempered third is sharpened (raised in pitch) by one seventh of a semitone, or fourteen cents, and eight beats per second should be heard when a third, G to B, for example, is played. Ultimately, with the equal temperament system, no interval is precisely in tune, but each interval of a certain kind is out of tune by the same amount.

Although you hear only one pitch when you press a key on your piano, each note is actually made up of composite tones, or harmonics. This is because as the whole string vibrates, sections of half, one third, one quarter (and so on) the length of the string vibrate simultaneously.

Each note thus has a series of harmonics: the first is the octave above the note, the second is the fifth above that, then the fourth above the fifth, and so on. You can test this system of harmonics by trying an experiment on your piano: depress middle C silently, then play the C below and, magically, you’ll hear the higher note as well. The middle C string, half the length of the lower C string, is set in sympathetic vibration. Other notes in this harmonic series can be produced by depressing G above middle C (fifth), C above that (fourth), then E (third).

Harmonics are significant in the tuning of a piano because they form the basis of relationships between notes. Certain notes of a scale have certain harmonics in common, for example, and the pitches of the scale actually derive from the pitches of the harmonic series.

As described above, the notes within the central octave are adjusted slightly to best represent pitches to the human ear, so they are only approximations of the “pure” pitches of a C harmonic. But these notes are in fact harmonics of lower notes on the piano. When this central scale, the one heard best by the human ear, has been tuned, each note of the two octaves above and below it are tuned one by one to its pitches.

The farthest octaves are, in turn, tuned to them.