How do Skywriting Pilots write words across the sky in airplane exhaust smoke?

When we think of skywriting, most of us picture a small airplane looping-the-loop to scrawl advertising slogans or “I love you’s” with a vanishing vapor trail. But such laborious acrobatics are almost a thing of the past.

Since the wind can wipe out a letter even before the daring aviator finishes it, an imaginative skywriter has dreamed up a longer-lasting, if less romantic, method of “skytyping.” Although you occasionally see the original form of skywriting in this country, now you are more likely to see messages rapidly “typed” out across the sky in dot matrix form by a close formation of five or six airplanes.

The inventor of traditional skywriting is thought to have been a British flying ace, Major John C. Savage, who got his inspiration from the use of airplanes during World War I to spread smoke around ships and troops to camouflage them from the enemy. 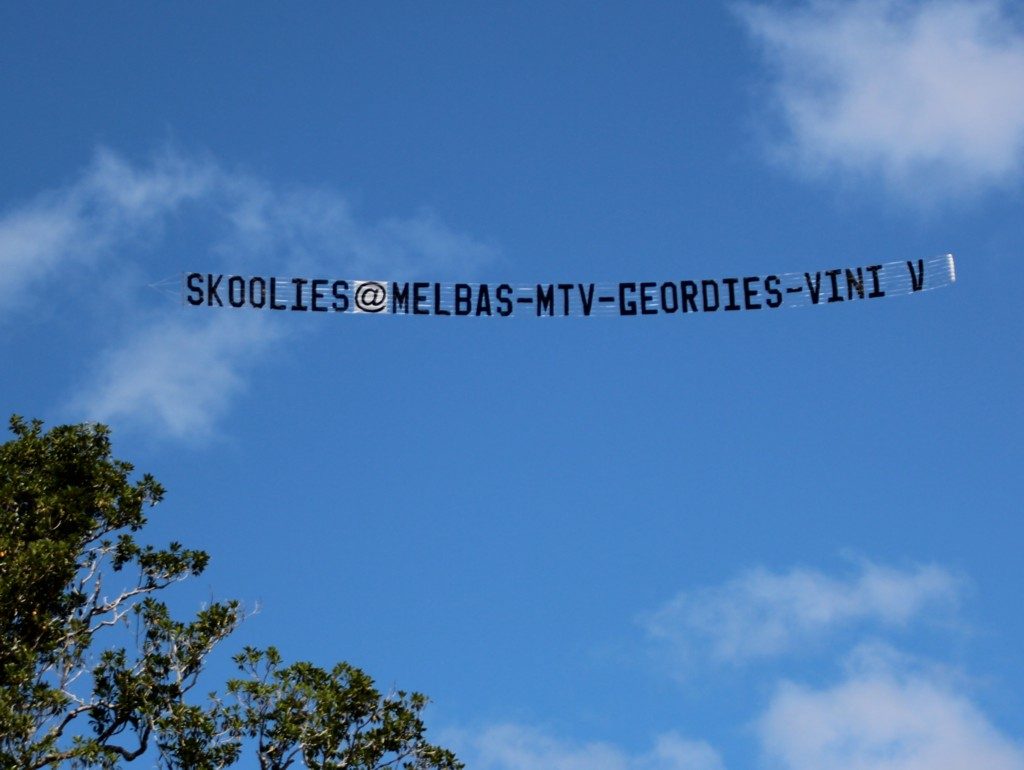 In 1922 he wrote “HELLO” to the crowds at a British racetrack. Later that year, a plane traced “HELLO, u.s.A.” over the Polo Grounds in New York during a World Series game and followed up with: “CALL VANDERBILT 7200.” Those who did reached the first commercial skywriting company in America, headquartered at the Vanderbilt Hotel.

Advertisers took to skywriting in a big way, but the business took a nosedive in the late 1940s, when television became a competitor. Despite the ingenuity of some pilots in holding their audience’s attention, like the one who spent hours misspelling the name of a local furniture company in ever more creative ways, advertisers perceived TV as more efficient in getting across their message.

U.S. Navy pilot Andy Stinis, celebrated as the most skilled American skywriter, saved his vocation by patenting “Skytypingin 1949, an innovative method of writing in the sky designed to make the medium faster and more versatile. Skytypers can write twenty letters in the time an old-fashioned skywriter can manage one. For instance, to write the letter M, a solo skywriter has to put his aircraft through these time-consuming maneuvers:

A “front-line” formation of five skytyping aircraft only needs to fly straight ahead, maintaining a distance of 225 to 250 feet between planes. When commanded by computer, they emit brief bursts of smoke according to this format.

Messages to be skytyped are transposed onto a tape as a sequence of punch marks along the lines of the diagram above, indicating when each aircraft should emit smoke.

When the planes are at ten thousand feet and over their prospective audience, the tape is fed into a specially designed computer housed in the lead plane of the squadron. The computer reads the tape and triggers the lead plane’s radio transmitter to send out radio signals on different frequencies specific to the radio receivers of each other plane in the formation.

The radio signals activate each receiver to command a valve to open and start the process that releases a burst of smoke. The entire system is rather like an antiquated nineteenth-century piano roll.

To keep the typed-out message hanging in the sky for as long as possible, a patented solution is added to the planes’ exhaust that makes it more visible and holds it in place longer. On a windless day, a skytyped message can be read in its entirety for as long as twenty-five minutes, as opposed to the few minutes of a conventionally skywritten one.

The exact recipe for Stinis’s patented solution is a secret, but essentially it is a highly distilled form of paraffin gas, 100 percent biodegradable, nonpolluting and EPA-approved. Each time a plane’s receiver is activated by radio signal, a valve releases a small amount of the distilled mineral oil into the plane’s extremely hot (2,000 to 2,300 degrees Fahrenheit) manifold.

The oil is instantly vaporized and forced out through a ten-foot pipe running along the top of the starboard wing and extending six inches beyond it. When the very hot vapor hits the very cold air at ten thousand feet, it condenses as a little, intensely white, artificial cloud, its steam molecules held together by the paraffin.

Skytyped messages usually run a thousand feet tall and six to eight miles long. With six aircraft the letters can be made even taller. The writing is visible for four hundred square miles; over a crowded urban area a message can be seen by as many as three and a half million people, and a single plane formation can print out thirty messages a day. Commercial skytyping has included pictures of diapers and diamonds strung out across the sky, and the aerial writers have taken on all sorts of personal missives, too.

Sometimes skywriting the old-fashioned way with a solo plane. (for no extra charge) they have proclaimed “ALICE DIVORCE ME. GOOD-BYE HOUSE. HELLO ALIMONY” and, in another case, “REPENT. THE END IS NEAR.” But the sky must be blue and the wind below thirty-five knots (forty miles per hour) or no one will see the message.