How does the Chief Medical Examiner’s Office determine the cause and time of death from an autopsy?

Twenty four percent of the 72,079 deaths in the city in 1979 were not certified by a private physician and were referred to the Medical Examiner’s Office.

Most of those were caused by criminal violence, accidents, and suicides. Other categories that call for autopsy include “unusual” cases, the sudden death of someone in good health, death as a result of therapy or surgery, and so on. Any non-certified death after which cremation is requested must also be examined, for obvious reasons. 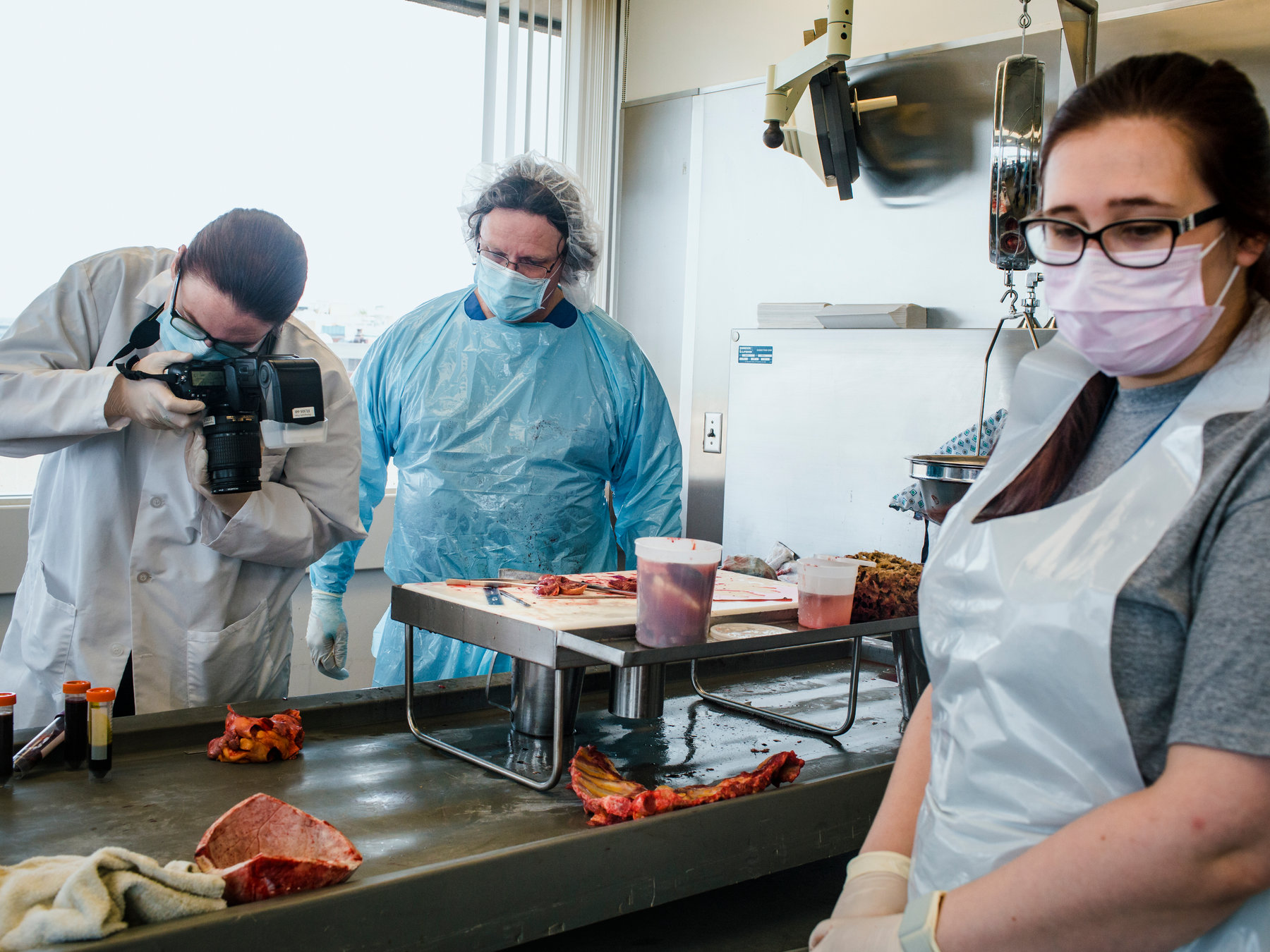 A museum on the sixth floor of the Medical Examiner’s Office houses all sorts of evidence from autopsies, from weapons to bones. One specimen is the skull of a man who was thought to have died from a stroke, until examination revealed a wound track in the deepest recesses of the brain. The examiner traced the wound to the membranes covering the brain, and then to a small hole in the side of the skull which was concealed by hair. An assailant had plunged an ice pick into the man’s head.

In a typical case, an examiner might be called to the scene of a homicide. He investigates the area, the position of the body, and other conditions. Blood droplets radiating around the body might suggest that the man was shot there; the absence of such telltale clues might indicate that the body was dumped at the site long after death. A jagged wound surrounded by scorched skin means the assailant shot at close range.

The time of death is usually problematic, and no single test is dependable. If rigor mortis has set in, the victim is likely to have died at least five or six hours previously. If his limbs are not yet completely cold, he has probably been dead fewer than twelve hours.

The examiner brings the homicide victim to the office, where the entire body, not just the area of the wound, is examined. Radiographs are used to look for a bullet or bullet fragments. Urine and stomach contents are analyzed for alcohol or drugs.

Blood samples are taken to be compared with possible evidence found on a suspect. Fingernail scrapings are examined for the same reason.

In the Easter Sunday killings of 1937 such a scraping was enough evidence to indict twenty eight year old Robert Irwin for three murders. Irwin had been jilted by Ethel Gedeon and went to her apartment enraged. He found Ethel out, and turned on her mother instead. He strangled Mrs. Gedeon, who scratched his face as she struggled. The desperate Irwin, finding Ethel’s sister and a boarder also at home, murdered them, too. Irwin was seen near the apartment and became a suspect, and the autopsy, which detected stubble from his face beneath Mrs. Gedeon’s fingernails, confirmed his guilt.

In the famous case of the Crimmins children, murdered by their mother, Alice, in July 1965, the contents of the little girl’s stomach held a vital clue to the time of death. Dr. Milton Helpern, then Chief Medical Examiner, performed the autopsy.

Tiny hemorrhages in the eyelids and larynx, as well as congested lungs, suggested asphyxia. (The girl, Missy Crimmins, had in fact been found with her pajamas knotted around her mouth.) Although the cause of death could thus be verified, the autopsy unearthed other factors essential to the case. Alice Crimmins had said she fed the children at 7:30 P.M. and saw them after midnight; they were abducted in the predawn hours, she claimed.

Helpern, however, found fresh food in the child’s stomach, which was full, indicating that Missy had died within two hours of a meal. In cases of physical or mental disturbance hours or even days before death, which can alter drastically or even stop the digestion process, analysis of stomach contents may be misleading. But in Missy’s case, since death was rapid, the evidence was significant, leading Helpern to believe that Alice Crimmins was lying. Courtroom scenes that dragged on for years have proved him right.

When in 1933 Helpern was new in the position of Chief Medical Examiner, he investigated the death of a heroin addict, and, in the process, turned up a dozen cases of malaria. The man, a seaman, was thought to have died from encephalitis, or brain infection. Helpern did an autopsy and found purplish patches in the white matter of the brain, caused by thousands of small hemorrhages.

Having learned that outbreaks of malaria had occurred among other addicts, he visited the city prison and the correction hospital on New York’s Welfare Island, where he talked with and examined addicts who took the drug intravenously. Eleven of the 110 addicts had malaria; each had been infected by an injection apparatus that was used communally. A drop of blood would get through the needle and into the syringe; thus were malarial parasites transferred to the next user.

Determining the cause of death from autopsy is not always foolproof, of course. Cases arise, for example, in which examiners fail to distinguish between an injury inflicted before death and one that was incurred after death.

Nevertheless, autopsy can reveal valuable information, findings to make or break a courtroom case, when performed with the proper knowledge and expertise.