How does the Sacred College of Cardinals and the Holy See pick a new Pope?

The election of a new Pope by traditional methods passed down through the centuries occurs in the Vatican in Rome, where the College of Cardinals gathers behind closed doors under strict vows of secrecy.

This tradition of secrecy arose so that the selection process could take place without interference from powerful secular governments. Precisely what occurs during the time the cardinals are cloistered there thus remains shrouded in some mystery. Still, some elements of the process have become known.

After waiting a minimum of fifteen days after the death of the previous Pope, the three orders of cardinals, cardinal bishops, cardinal priests, and cardinal deacons, meet and begin talking among themselves about potential candidates. Outright electioneering (as for a U.S. President) is not believed to occur, but the cardinals probe each other’s feelings about the strengths and weaknesses of candidates; and although they rely on prayer for guidance, they are not immune to politics. 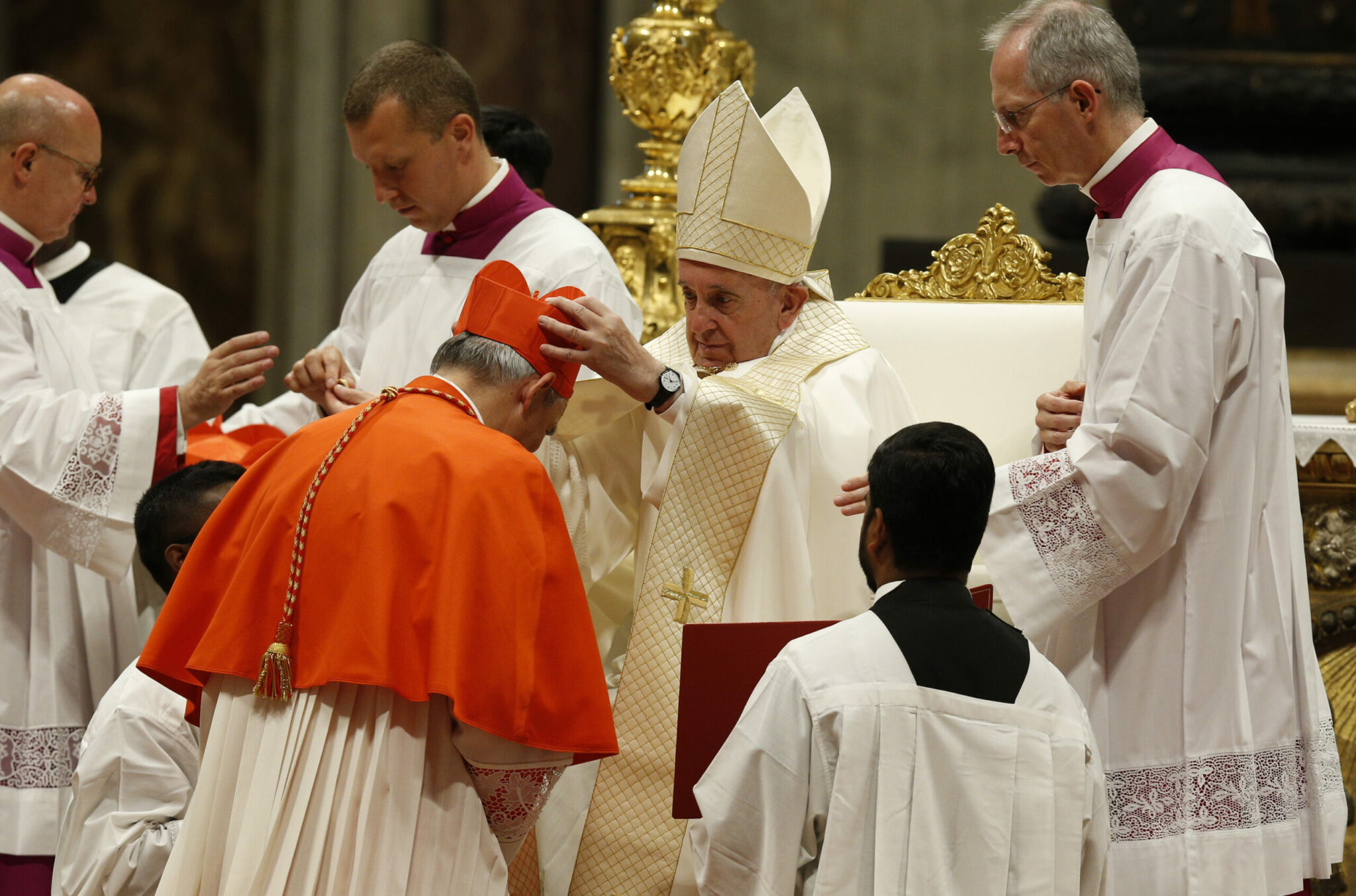 The Sacred College of Cardinals, of which there were 111 members when John Paul II was elected in 1978, gathers at the Hall of Congregations and first proceeds to the basilica of the papal palazzo to celebrate mass.

The cardinals are locked for an indefinite amount of time within the Vatican walls, along with confessors, physicians, janitors, cooks, and barbers. Only the cardinals, of course, convene in the Sistine Chapel to elect the new Pope; the others work to make the cardinals’ stay comfortable, or simply remain on hand, ready to be of service.

The museum and library are cleared of tourists, and the members of the conclave, under rigorous security, stay in private cells in the papal palazzo and attached buildings. Because of a scandal in the thirteenth century when the conclave remained for thirty three months banqueting and carousing, the food is plain at best. Most phones are disconnected, and mail is censored. Periodic searches are made for radios or other devices for transmitting messages to the outside.

At the first congregation the cardinals must swear an oath, under penalty of excommunication, “to observe with the greatest fidelity and with all persons, including conclavists, the secrecy concerning everything that in any way relates to the election of a Roman Pontiff and concerning what takes place in the conclave or place of election, directly or indirectly concerning the scrutinies … not to break this secrecy in any way, whether during the conclave or after the election of a new Pontiff, unless … given a special faculty or explicit authorization from the same future Pontiff. The cardinals must swear to elect the man they hold most worthy of being Pope and ignore any influence of secular governments. All others present within the Vatican must swear, under penalty of excommunication, a similar oath of secrecy about everything relating to the election.

Traditionally, no voting occurs on the first day, which is reserved for prayer, consultation, and a meeting of the conclave to hear the constitution for the election of a new Pope. On the second day the conclave meets in the Sistine Chapel to begin the election. The constitution of Pope Paul VI allows for three methods of selection.

The first is by inspiration: a cardinal may be moved to call out the name of a candidate, and if the others unanimously call out “I elect,” the matter is settled. Usually, however, the election is by scrutiny, or secret ballot, which calls for a majority of two thirds plus one in support of a single candidate.

Balloting occurs twice daily for three consecutive days. No speeches or conversations are permitted while the cardinals are gathered for balloting. Each writes a name on a formal ballot, goes to the altar, prays, makes a vow of secrecy, and drops the ballot onto a plate that covers a chalice. He then tips the plate so that all may see the ballot fall into the cup. Three elected cardinals act as “scrutinizers” to count the votes and read them aloud.

Another committee of three cardinals recounts them. If there is no majority of two thirds plus one, the balloting is done a second time. If again a majority is not reached, the ballots are burned in a stove along with a chemical pellet that turns the smoke black. Those anxiously waiting outside the Vatican see the puffs of dark smoke, which signify that no Pope has yet been elected. After three days of balloting the cardinals recess for several days of prayer, meditation, and spiritual exhortation.

In the event of an impasse, which is extremely rare, the Sacred College may decide to vote only between the two leading candidates or opt for the third method of election: by an appointed delegation of nine to fifteen cardinals. (The number must be uneven.) The College decides whether the delegation’s vote must be unanimous or a simple majority, whether the candidate must be from the College or from a wider field, and how long the delegation may take to reach a decision. For centuries, though, it has not been necessary to pursue this course of action.

When at last a new Pope has been elected, the ballots are burned in the stove with a chemical that emits white smoke to alert the waiting world outside.