Elephants love to paint, and many would put the smugs in expensive arts schools to shame. 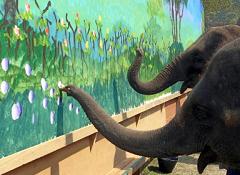 We have also known since ancient Roman times that elephants have a keen ear for musical notes.

For instance, they are able to follow complicated musical cues when working in the circus.

Their natural musical ability inspired Richard Lair of the Thai Elephant Conservation Center in Thailand and the neurologist David Sulzer, head of Columbia University’s Sulzer Laboratory, who works under the name David Soldier in his musical career, to create the Thai Elephant Orchestra.

The two began by building larger, sturdier versions of Thai instruments, a large gong, drums, a xylophone-type instrument. They added a few other percussion instruments and harmonicas and began training the elephants to play the instruments.

They also taught them to follow start and stop cues.

At first, the intention was to let the elephants play as they wished, and Sulzer would cut segments for use in his produced pieces.

However, the two humans were surprised that the music the elephants made worked as full musical pieces and didn’t need any polishing in the studio. The results are more New Agey than show tunes, but not at all what you’d expect from an orchestra with trunks.

Lair and Sulzer discovered that many of the elephants didn’t really need to be taught simple start and stop cues; they followed their cues precisely from the get-go. The elephants also seemed to recognize dissonance.

When a key on a xylophone was replaced with one that didn’t fit the scale, the elephant musician avoided it completely.

Eventually she learned to like it by itself, and then she played it over and over again for several pieces. Because of the success of this venture, other elephant orchestras are being formed in various locations.

Lair and Sulzer created a CD with others in the works, the proceeds of which will go to helping raise orphaned young elephants.