Some elephants are still used as transportation in India and Asia, but not nearly as many as in the past. 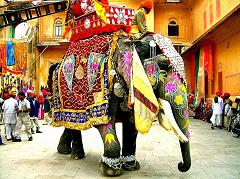 This is primarily because most forests have been cut away, reducing the number of elephants needed for logging, a once dependable job for the beast.

Also, motor vehicles are rapidly displacing elephants as transportation in this part of the world.

In most countries, the only transporting the remaining elephants do is for the tourist industry, giving rides to foreigners.

Seals found in the Indus Valley suggest that the elephant was first domesticated in ancient India, but elephants have never been truly domesticated as the male elephant is sometimes dangerous and difficult to control.

The Laotians have been domesticating elephant for centuries, and war elephants were used by armies in the Indian sub-continent.

War elephants were also used by the Persian Empire, and adopted by Hellenistic armies after Alexander the Great experienced their wrath against King Porus.

What an Unforgettable Trip it has been.