How is the Cheetah the Oldest Living Species of Big Cat and Where did it Come From?

The cheetah was previously believed to be the primitive species among the big cats and evolved approximately 18 million years ago. 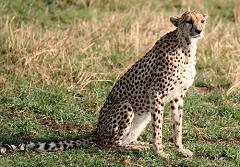 Recent studies have suggests that the last common ancestor of all species of felines lived only about 11 million years ago.

The same research shows that the cheetah, does not have ancient lineage, and separated from its closest living relatives like the Puma around five million years ago.

The oldest cheetah fossils have been uncovered in what is now Nevada, Texas, and Wyoming.

Until the end of the last Ice Age, about 10,000 years ago, cheetahs were common in North America, Asia, Africa, and Europe.

Cheetah is Hindi for “spotted one.”