How is the Moose the Largest Species of Deer in the World?

The moose which is known as elk in Europe, and by its scientific name Alces alces, is the largest living species in the deer family. 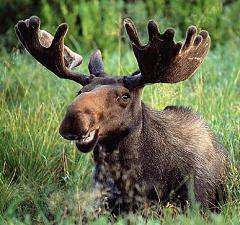 Moose can be found in all of Canada, most of Alaska, much of New England and upstate New York, and the upper Rocky Mountains.

Behind the bison, the Moose is the second largest land animal in both North America and Europe. That’s pretty big.

The male moose has antlers that grow on each side of the head at right angles which makes it look even bigger.

Moose are so gigantic that a fully grown moose has few enemies, but a pack of wolves can still pose a threat, especially to smaller females with babies.