Only about one in twelve moose gets killed when they are stalked by a wolf pack. 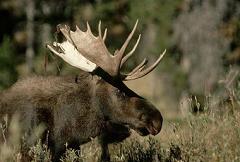 A moose is so good at defending itself that if it stands its ground, wolves will back down.

Reports from Newfoundland years ago say they began attacking train engines, running toward the iron beasts and banging into them with their antlers.

It took some time before the train company realized that the attacks were seasonal, that the attackers were male, and that not only did blowing the train whistle not scare them, it seemed to make them madder.

Researchers finally figured out that the train whistle was the same pitch as the moose mating call, and that the male animals were seeing the engines as rivals.

The railroads changed the pitch of the whistles, and the moose attacks stopped.