How Long have People Been Breeding Dogs as Pets and When was The First Dog Domesticated?

Domestication of dogs by humans can be traced back to at least 10,000 years ago. 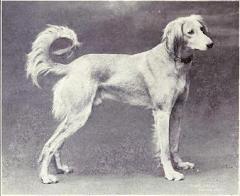 Evidence of the oldest known breed of dog, the saluki, a Middle Eastern dog, appeared on artifacts as long ago as 7000 B.C.

The irresistible, fluffy Maltese also dates back to ancient Egypt, around 500 B.C. They were worshiped as gods alongside members of the royal family.

In contrast, the Chihuahua was possibly bred as a mere hand warmer for Aztec royals in drafty palaces.

The little dogs could easily fit inside the sleeves of robes, and their body temperatures may have kept the hands of the kings, queens, princes, and princesses from getting cold while they did their royal duties.

Priests also used them as afterlife amulets for the dead; their presence was believed to ward off evil spirits, so they were sacrificed in burial rituals.

Ordinary Aztec people, however, kept them as house pets and for food.

Give Us This Day Our Doggie, Bred.