You are here: Home / Animals / How Many Different Hippopotamus Species Exist on Earth and What are the Differences Between Them? 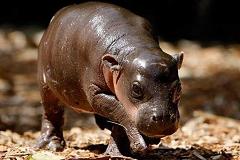 The common hippopotamus is about five feet high and fourteen feet long, and the pygmy hippo is about a yard tall and four and a half feet long.

The pygmy hippo weighs only about 400 or 500 pounds, as opposed to the male common hippo, which weighs in somewhere between 7,000 and 8,000 pounds.

Besides size, the main difference between the two is that pygmy hippos are terrestrial. They live in the underbrush of the African forests and have feet that more closely resemble a pig’s than those of the larger hippopotamus.

The pygmy hippo’s eyes are located on the sides of its head, and its nostrils are flat on its face like those of most land-dwelling herbivores.

Its larger cousin, to accommodate its life in the water, has eyes on the top of its head and bulging nostrils so it doesn’t have to lift its entire head out of the water to breathe and see.

Primarily due to human encroachment on their habitat, only between 2,000 and 3,000 pygmy hippos are left in the wild. Compare this to the 157,000 common hippos left in the wild—a number that’s still too low, due to the poaching of the larger animals’ teeth.

Pygmy hippos do not live in herds. They’re solitary creatures by nature.

Previous Post: « What is the Difference Between a Mastodon and a Woolly Mammoth and How Do You Tell Them Apart?
Next Post: Why is the Hippopotamus Poached for its Teeth and How Many Hippos are Left in the Wild? »