How many different types of Germs, Bacteria, and Viruses live in the Toilet and Bathroom?

So much for hand washing and bathing. Now what about those porcelain facilities?

What microbiological horrors lurk in the toilet bowl, the sink, and the bathtub, and what are you supposed to do about them? There are plenty of germs that accumulate in those places, but as far as your health is concerned, your kitchen is almost certainly more dangerous than your bathroom.

Much of the research done on bathroom microbiology is done in hospital or other institutional settings, where infection control is a considerably greater problem than it is in your bathroom at home. Nevertheless, we can draw some conclusions from this work, and from the smaller body of research that is devoted to home toilet facilities. Let’s start with one of the more common germs, salmonella. 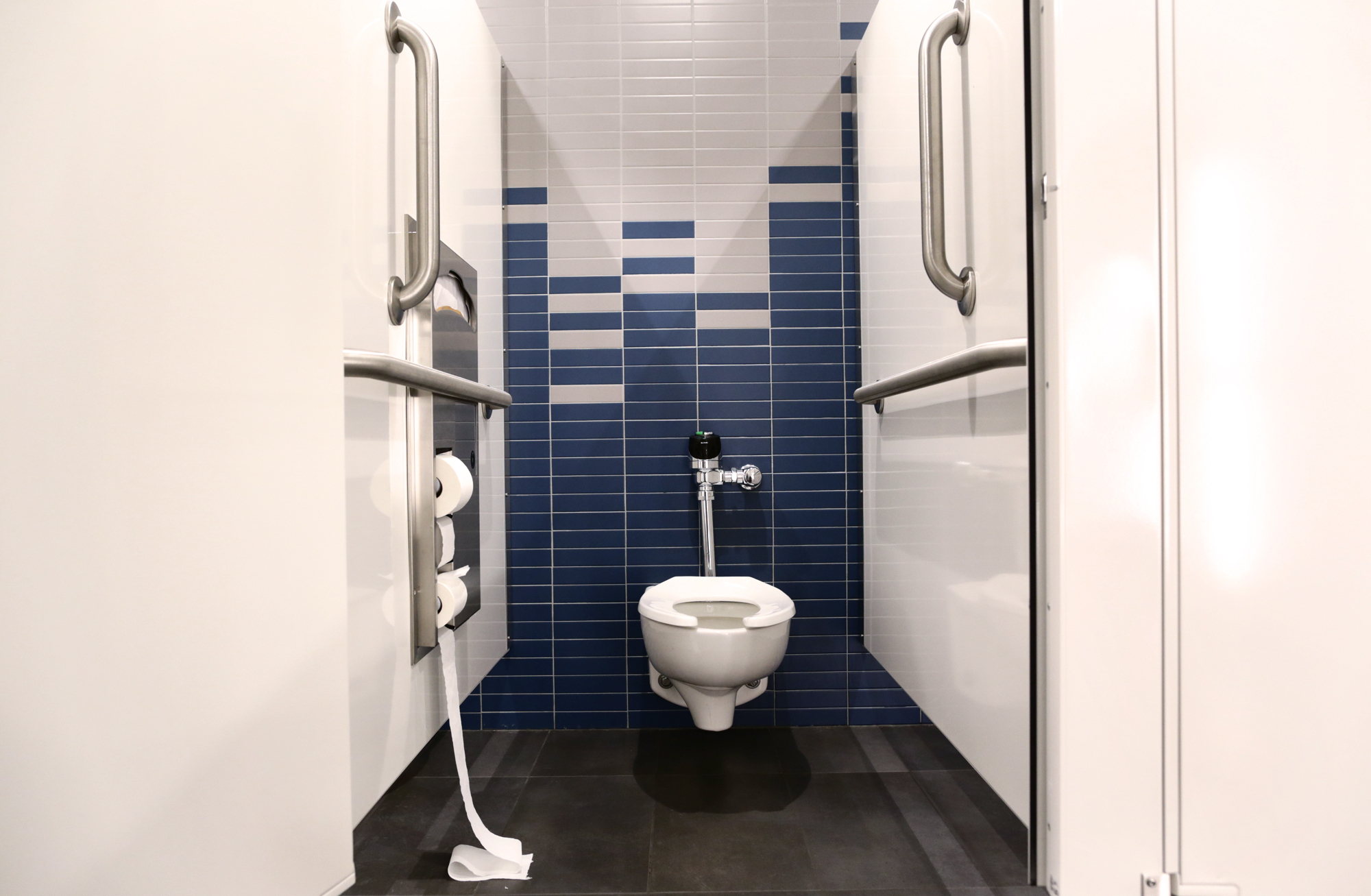 Salmonella is not considered a contagious disease. You get it in various ways, mostly from contaminated food, and you don’t usually pass it on to members of your family. But a recent British study showed that in a home where someone with diarrhea caused by salmonella used the toilet, there were plenty of salmonella bacteria left in the bathroom, even for as long as four weeks after the diarrhea had stopped.

It was a small study, they tested six households, but they found that in four of them the toilet bowl rim and the scaly biofilm adhering to the toilet bowl surface below the water line were both contaminated with S. enteritidis. Even using toilet cleaning fluids didn’t get rid of them. On dry areas, the toilet seat, the handle, and the door handle, no salmonella were found.

Then the researchers set up an experiment to mimic toilet use by a salmonella-infected person with diarrhea. A microbiological researcher was bound to come up with this idea, but it took two researchers at the Pharmaceutical Sciences Institute, School of Life and Health Sciences in Birmingham, England, to actually follow through with it.

Anyway, we leave to your imagination the details of the way the experiment was set up and carried out, but they learned that under experimental conditions, flushing a toilet full of salmonella-infected diarrhea caused salmonella bacteria to contaminate the toilet seat and toilet seat lid. Bacteria were also isolated from an air sample taken immediately after flushing, suggesting that they could land on and contaminate other surfaces in the bathroom.

In one case, they found bacteria in the toilet bowl water. The authors conclude that there is “considerable risk of spread of salmonella infection to other family members via the environment.” Judging from how rarely salmonella is in fact passed from one family member to another, this seems rather overstated. While it’s true that a salmonella-infected person who doesn’t wash his hands after he uses the toilet can contaminate stuff he touches, including food that someone else might eat, it must be very rare indeed that anyone contracts salmonella poisoning from the small amount of bacteria left in a bathroom recently used by that person. With some organisms like shigella, if you ingest just one or two of them you can get infected. But salmonella requires a good-sized dose, you have to eat about 100,000 of them to get sick.

To get infected with salmonella from using a toilet, you would probably have to scrape your hands along the edge of the toilet bowl or wipe them on the surface of the bowl beneath the waterline. You would have to do this soon after the infected person had used the toilet. Then you’d have to put your hands, before washing them, of course, in or near your mouth to get the germs inside you. And you’d have to get a large enough dose to cause disease. This seems an unlikely series of events, at least for adults.

On the other hand, there is a Chilean study that shows that typhoid fever (which is caused by a bacterium of the same family as the one that causes salmonellosis) was transmitted among the families of kids in a manner very much like this. The researchers had two groups of 40 kids, 20 of whom from each group had had typhoid fever. One group was of high socioeconomic status, one of low. They showed by statistical means that dirty toilet bowl rims and nail-biting were very good predictors of who would get sick. And they also showed that high socioeconomic status was no protection: the rich kids got typhoid fever just as easily as the poor kids, adding more evidence to the assertion that germs don’t care how much money you have, and suggesting further that they don’t care how much money your parents have, either.

These researchers are not the only microbiologists to indulge an interest in toilet bowl cleanliness by conducting scientific studies of what happens when a toilet flushes. Some years ago, a group at the Baylor College of Medicine in Houston tried “seeding” a toilet bowl with a strain of E. coli harvested from domestic sewage and with a type of poliovirus to see what would happen when they tried to flush them away. They put a sample of E. coli (carefully measured to simulate its concentration in real fecal matter) into a toilet bowl, then began sampling the resultant brew for bacterial concentration. They flushed, measured, flushed, measured, and flushed again and measured again. They found that the first flush eliminated most of the bacteria, but subsequent flushes didn’t improve things much, in fact, “there was often an increase in the number of residual organisms detected in the bowl.”

The same thing happened when they did the flush tests with a sample of poliovirus. They concluded that the germs were sticking to the porcelain surface of the toilet bowl. When they tried eliminating them by using a toilet bowl disinfectant, it worked quite well. But the toilet bowl cleanser worked no better than just scrubbing the bowl with a toilet brush.

Then they decided to see what happens to water droplets when you flush. Here their ingenuity really came into play. First they dyed the toilet bowl water purple. Then they covered the bowl with a sheet of white absorbent paper so that any drops would fly up onto the paper and make purple stains that could be counted. Tank toilets produced 27 to 104 drops per flush, in a random pattern on the paper. Valve toilets only produced 7 to 10, clustered toward the rear of the bowl. So they knew from this that droplets were certainly flying out of the bowl with every flush. Then they covered the toilet seat with some gauze, contaminated the toilet water with E. coli, flushed, and collected the droplets on the gauze.

They found that the number of bacteria ejected onto their gauze was directly proportional to the amount of bacteria with which they had contaminated the toilet bowl water. Then they put their gauze on other bathroom furniture, the sink, the faucets, the floor, and so on. Each time they found that they could culture out bacteria until about four hours after flushing. After that time, the bacteria had pretty much disappeared. The results were more or less the same when they tried the procedure with the virus, but the virus disappeared more quickly, within about two hours.

There are other studies, too, that show that flushing a toilet can put germs into the air that can then settle on surfaces in the bathroom. But this is probably not a very serious threat, and carefully sanitizing your bathroom with antibacterial cleansers is unlikely to do much for your health. The CDC has concluded that even in hospitals, where there is considerably more risk than in a bathroom in a home, environmental surfaces contaminated with germs are not associated with transmission of infection to either staff or patients. For that, you need direct hand contact, which is why hand washing is so important, more important than sanitizing the toilet bowl.

This doesn’t mean you should stop cleaning your bathroom. Obviously there are aesthetic reasons for doing so, and discouraging the presence of germs there is certainly a good, even if not lifesaving, idea. Viruses generally don’t survive well on environmental surfaces, but bacteria can and do. Gram-positive bacteria such as staphylococcus survive best in dry conditions, while gram-negative bacteria and fungi prefer moist areas. The bathroom has to be cleaned only with ordinary soap and water, you can use a disinfectant, but the actual scrubbing of surfaces is more important for getting rid of germs than the use of any antibacterial detergent. Washing the floor with disinfectants is probably a waste of time. Disinfection of floors has no advantage over washing them with soap and water, and anyway floors become contaminated as soon as you’re done disinfecting them because of airborne microorganisms and even from the mere presence of human bodies and shoes.

The cloth, sponge, or mop that you clean with can itself be a means of moving germs around. If you want to be really careful, you should wash your cleaning cloths or mops out between uses and let them dry before using them again. This minimizes the possibility of having contaminated cleaning equipment. Some people will be willing to make this kind of effort; some won’t. There isn’t much proof that the former will wind up any healthier than the latter.

One study done at Georgetown University School of Medicine found that even bars of soap in the bathroom are contaminated with bacteria and that wet soap has more bacteria than dry soap. The major bacteria species isolated from the bars of soap were staphylococcus species and enterobacteria. Again, though, the authors were unable to draw any epidemiological conclusions from this, that is, they couldn’t prove that these bacteria were actually making anyone sick.

In general, if you’re looking for bacteria on environmental surfaces, you’re more likely to find them in the kitchen than the bathroom. When they examined kitchens and bathrooms carefully, a group of Arizona researchers found that the least contaminated place was the toilet seat, and that moist environments in the kitchen, the sponge, the dishcloth, the kitchen sink drain, and the kitchen faucet handle, were the best homes for bacteria.

The most contaminated place in the bathroom was the sink drain, another nice wet place for bacteria to thrive.