What is Mechanically Separated Meat and How does it help Spread Mad Cow Disease?

I hate it when I talk to myself disrespectfully like that. “Did you think all the meat we buy is cut by blood-spattered slaughterhouse workers hacking meat off the carcasses, much as our prehistoric ancestors did after a successful mastodon hunt?” 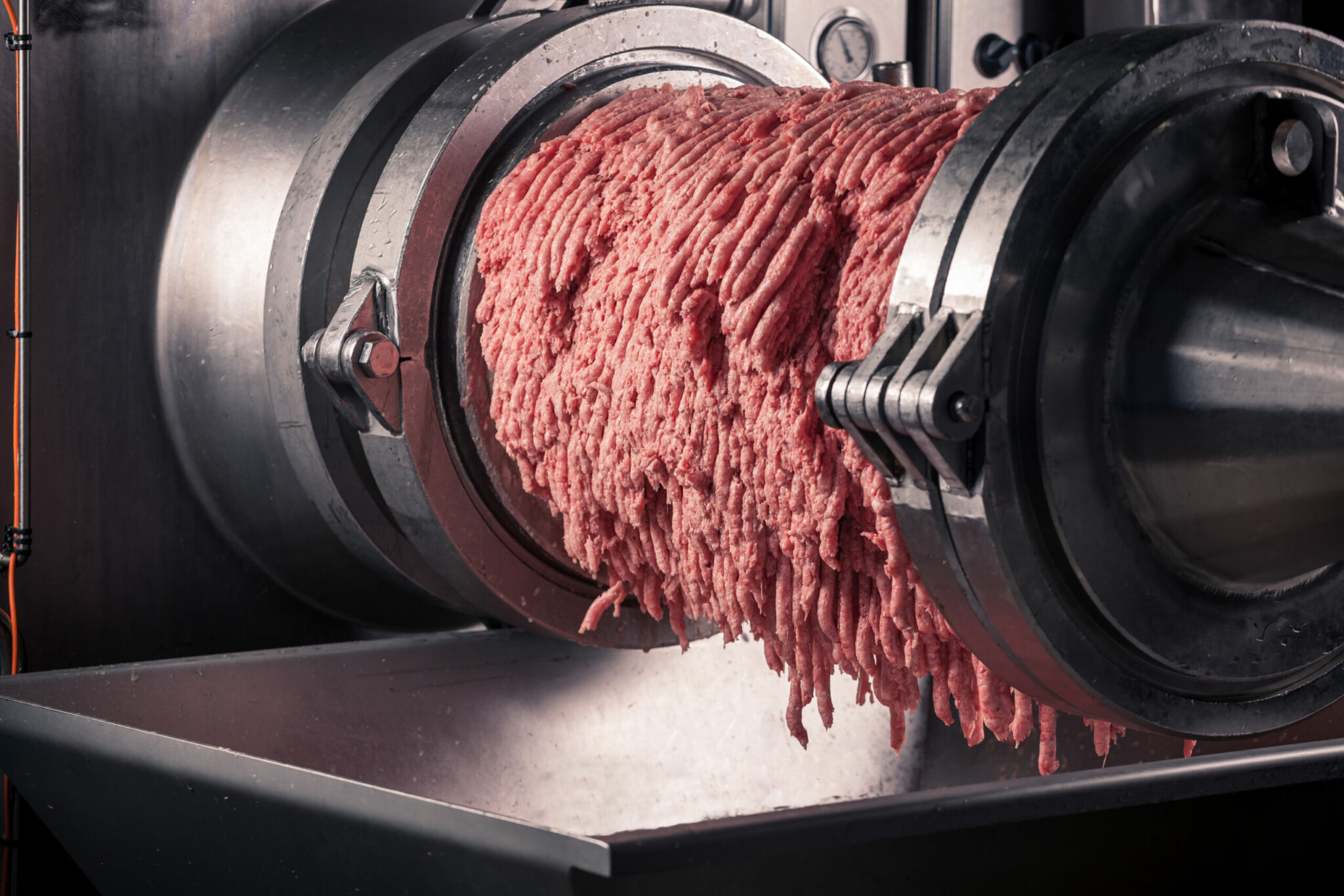 Truth be told, yes. That is indeed the way most of the job is done. But these days, machines supplement those blood-spattered slaughterhouse workers by removing the remaining meat from the bones after the humans have done their best with their knives.

Although most of us would rather not think about it very much, meat begins with slaughtering at a packing plant, which might better be called a hacking plant. (The euphemism “packing” originated in colonial times, when pork was salted and packed in barrels for shipping overseas.) As soon as the animal has been killed and its blood drained out, procedures that the meat industry delicately refers to as “immobilization” and “exsanguination,” respectively, what had previously been skeletal muscle has officially become meat.

Skeletal muscle is muscle attached to the skeleton rather than the muscular parts of the circulatory system, such as the heart. But a carcass is not all meat; it contains internal organs, bones, cartilage, tendons, ligaments, fat, and skin, all of which need to be excised during the subsequent stages of “disassembly.” That job is done mostly by saws and sharp knives, hand-wielded by packing-house workers.

After the carcass is split into two “sides” by a power saw, workers with knives cut it into eight so-called prirnal cuts: chuck, rib, short loin, sirloin, round, brisket and shank, short plate, and flank. The primal cuts may then be packed and shipped as is or reduced to smaller cuts (subprimals) or even down to display-case cuts, depending on how much subsequent butchering, if any, the buyer wants to do at the retail level. In either case, there is still a lot of unrecovered meat left in the trimmings, and that’s where the machines come in. They can separate almost all of the remaining meat from the bones.

There are two types of so-called meat recovery machines, depending on whether the bones are first crushed: the mechanically separated meat (MSM) systems, used since the 1970s, and the newer advanced meat recovery (AMR) systems.

In MSM machines, the bones are first ground or crushed, after which the soft tissues (muscle and fat) are forced at high pressure through a kind of sieve, separating them from the bone fragments, cartilage, ligaments, and tendons. What comes out is in the form of a paste or batter that can be thrown directly into the mixing vat for hot dogs, sausages, hamburgers, pizza toppings, taco fillings, and similar manufactured meat products, which have to be labeled as containing “mechanically separated meat.”

In the more modern AMR machines, the bones are not crushed.

They enter the machine whole and emerge essentially intact after the meat has been scraped, shaved, pushed, or pulled off in small pieces. The USDA allows this meat to be labeled simply as “meat.” It may contain tiny pieces of bone the size of grains of table salt. This bone contributes most of the calcium listed in the Nutrition Facts tables on many processed meat products that you wouldn’t expect to contain much calcium.

As a result of the outbreak of mad cow disease, or BSE (Bovine Spongiform Encephalopathy), in the 198os in Britain and subsequent incidents in North America, the USDA since March 3, 2003, has required the routine sampling and inspection of AMR-produced beef for the presence of any spinal cord or brain tissue.

That’s where the disease-transmitting prions (PREE-ons) are located in sick animals. Prions are rather mystifying proteinaceous particles. They have no DNA or genes with which to replicate themselves and are therefore not alive, but they can cause disease in animals and humans. They can’t be inactivated by extreme conditions such as acids or heat that normally affect the nucleic acids in microbes and viruses. In humans, the mad-cow-transmitted disease is called Creutzfeldt-Jakob (KROYTS-felt YOK-ob) Disease, or CJD.

On December 30, 2003, the USDA announced that (a) all central nervous system parts (such as nerve cells along the vertebrae), not just brain and spinal cord tissue, must be absent in AMR meats, and (b) the use of mechanically separated meat (MSM) in human food is prohibited, because it is more likely to contain fragments of central nervous system tissue.

And that’s why you no longer see the MSM words on labels.

Of course, the machines enable the meatpackers to sell more meat, and that’s why they use them. But on its website, the American Meat Institute explains the virtues of using the machines: “Hand trimming requires repetitive cuts with a knife, which can result in repetitive motion injuries to employees. Reducing hand trimming [by using AMR] protects employees.”

It’s nice to know that the meatpacking companies are so concerned about their employees’ hands.

While you’re perusing labels in the meat case, you may see some hot dogs labeled as containing “variety meats.” This is a euphemism for any or all of the animals’ non-skeletal-muscle parts: hearts, brains (except beef brains), large intestines (chitterlings or chitlins), spleens (melts), pancreas and thymus glands (sweetbreads), kidneys, livers, lips, and tongues.

Other parts of animals that may find their way into wieners, sausages, and other mystery-meat products are blood, marrow, cheeks and other head trimmings, feet (trotters), tails (oxtails), stomachs (hog maw), lungs (lights), small intestines (sausage casings), skins (pork rinds), stomach linings (tripe), and testicles (fries, prairie oysters, or mountain oysters). Notice how the number of euphemisms multiplies along with the indecorousness of the organs.