The bald eagle is not bald, but is so called because it has a head of pure white feathers. 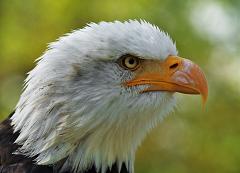 Its tail is also white, but the rest of its feathers are dark brown, and the wings may have silver tips.

Known as the “king of birds,” the bald eagle looks majestic and proud, and seems to typify a spirit of independence.

Now our national emblem is in danger of becoming extinct. Hunters have killed so many bald eagles that there are probably no more than 15,000 left in the United States. And most of them are in Alaska. Few Americans have ever seen a bald eagle in its natural environment.

Most birds have keener sight than humans and other animals, but the eagle is said to have the keenest sight of all.

Bald eagles mate for life and use the same nest year after year.

Made of sticks, these nests grow each year as the eagles add to them until they measure 10 feet across and weigh hundreds of pounds!