The Bald Eagle selects old-growth coniferous or hardwood trees for its nest, and these trees must have good visibility, an open structure, and be close to prey. 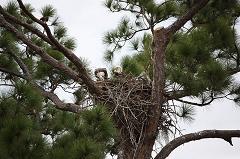 It is also important that the area has large trees surrounding a body of water.

Bald Eagles build the largest nests of any North American bird, and they can be up to 8 feet wide, and one tone in weight.

Forests used for nesting should have a canopy cover of no more than 60 percent, and no less than 20 percent, and be in close proximity to water.

How long it take a bald eagle to build a nest depends on where the eagles are nesting.

The bald eagle is certainly renowned for its large nests, called aeries or eyries, which are typically about five feet in diameter.

One found in Florida holds the record for the largest nest ever built: twenty feet deep, nine and a half feet wide, and weighing close to three tons, equal to the weight of a full-size car.

The bald eagle couple mates for life and often returns to the same nest year after year to hatch its young, reusing the original foundation and adding to it each year.

As time goes by, their nest becomes bigger and more elaborate.

The original basic nest can take the pair anywhere between one and three months to construct.

They will usually begin scouting about three months prior to egg-laying time.

In colder places farther north, some couples build the skeleton of the nest in the early fall before migration so that in the spring, when the weather is warmer and a young eagle’s fancy turns to love, they merely have to put on the finishing touches before roosting.

Aerie Go Round the Mulberry Bush.