The Bald Eagle, also known by its scientific name Haliaeetus leucocephalus, is a bird of prey native to North America. 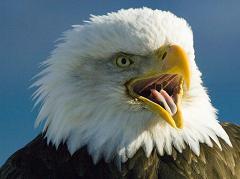 Bald eagles have white head feathers that contrast with their brown-and-gray body feathers.

The word bald actually comes from the Old English root bhel, meaning “gleaming,” or “white,” and this is where they got their name.

The bald eagle’s diet consists mostly of fish, but it is an opportunistic feeder.

The species was on the brink of extinction in the United States late in the 20th century, but has now recovered and has been officially removed from the U.S. federal government’s list of endangered species.

You Should See Their Little Hair Pieces.