What Do Bald Eagles Eat and How is the Bald Eagle an Opportunistic Scavenger That Steals Food?

The bald eagle is like a thug when it comes to feeding, and loves to eat fish such as trout and salmon. 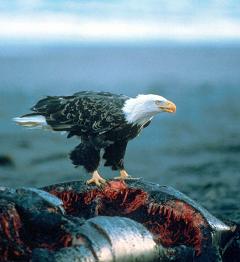 Although bald eagles are capable hunters, they would rather scavenge for food.

They hang around and steal the catches of other animals, like coyotes and younger, less experienced eagles, than do the dirty work themselves.

Their second choice is to act as scavengers. One of their delicacies is the discarded remains of fish from brown bears.

The bears hunt in deeper spawning areas for salmon, feasting heavily on the fatty brains and the eggs to put on weight for the winter.

When the brains and eggs have been sucked out, bears throw the salmon remains onto the banks of the river, where bald eagles are waiting to scoop up the leftovers.

If they can’t steal or scavenge, eagles will reluctantly resort to the actual hunting of live food.

The eagle is a good hunter when it has to be, and has even been seen working in coordination with other eagles, herding fish into shallow waters so all the eagles in the hunting party can eat.

This teamwork has only been discovered recently; perhaps if Ben Franklin had seen it, he wouldn’t have been so quick to talk up the turkey.