“Everything that coruscates with effulgence is not ipso facto aurous” is a rather highfalutin way of saying “All that glitters is not gold,” but without a dictionary you’d never guess it. 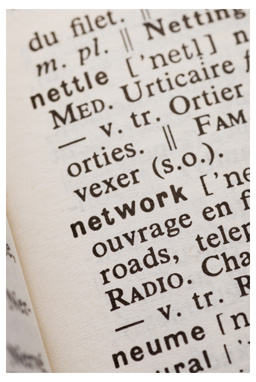 “Look it up in the dictionary” is a piece of advice foreign to few ears, but did you realize that until the eighteenth century speakers of English had no lexicographic authority to consult for the meaning of the thousands of English words now nestled between aardvark and zymurgy?

The first English work to bear the title “dictionary” (in its Latin form, dictionarius, from dictis, “saying” or “word” and dicere, “to say”) appeared around the year 1225. But that first manuscript actually listed Latin words to be learned by rote by students, with only a few English words inserted, here and there, for explanation. Words were not grouped alphabetically, but were arranged according to subject.

English words began to appear regularly in fifteenth-century dictionaries, but still served only as aids to the study of Latin. One noted dictionary of this era was the charmingly titled Storehouse for the Little Ones, or Promptorium Parvulorum, brought out around 1440 by a Dominican friar aptly named Galfridus GrammaticusGeoffrey the Grammarian. The work contained about 12,000 English words and their Latin equivalents. It did not appear in print until 1499 for one rather compelling reason, the printing press hadn’t yet been invented.

The Storehouse was not the only 15th and 16th century dictionary with a colorful title, metaphoric titles were the custom for many years. A work dating from 1500 was dubbed Ortus Vocabulorum, The Garden of Words, and a 1573 student’s dictionary was somewhat presumptuously named Alvearie, or “Beehive.”

The first real English dictionary was the Abcedarium AnglicoLatinum pro Tyrunculis, a Latin-English work completed by Richard Huloet in 1552. This compendium contained some 26,000 words with their Latin translations. Each word was defined in English. Thus, the Abcedarium, though designed as a Latin aid, can be considered a bona fide English dictionary.

The Abcedarium was popular in its time, but relatively expensive. So in 1570, a physician named Peter Levins brought out what was basically a cheaper version of Huloet’s work, entitled Manipulus Vocabulorum, A Handful of Words. The entries were arranged, not alphabetically, but according to the spelling of their final syllables, making the book, in effect, the first rhyming dictionary in the English language.

Early dictionaries made no attempt to include all English or Latin words, only those that were considered troublesome to students. The title of a 1604 work by Robert Cawdrey explains it best: A Table Alphabeticall, conteyning and teaching the true writing and understanding of hard usual! English wordes . . . gathered for the benefit and helpe of Ladies, Gentlewomen, or any other unskillful persons. As for the difference between “Ladies” and “Gentlewomen,” you’ll have to consult a dictionary.

The more tersely titled The English Dictionarie appeared in 1623, compiled by Henry Cockeram, but based to a great extent on Cawdrey’s work. Cockeram’s dictionary was hardly the last word in lexicographic precision, as is readily apparent in a definition such as “Hyena: A subtil beast, conterfeiting the voice of a man . . . He is sometimes male and sometimes female.”

Another of Bailey’s works, Dictionarium Britannicum, appeared in 1730, displaying “not only the Words, and their Explications, but the Etymologies.” Bailey was also among the first to indicate the pronunciation of words along with their definitions.

In 1791 came the Critical Pronouncing Dictionary and Expositer of the English Language, compiled by an elderly actor named John Walker. Walker’s book is still considered valuable for its treatment of pronunciation.

The phonetician, Isaac Pitman, based his popular shorthand system on Walker’s principles.

Perhaps the most remarkable dictionary of the eighteenth century was the accomplishment of the legendary Samuel Johnson. Johnson’s prodigious work, which was completed single handedly, was brought out in 1755 as A Dictionary of the English Language. As Johnson’s renowned biographer James Boswell noted: “The world contemplated with wonder so stupendous a work achieved by one man, while other countries had thought such undertakings fit only for whole academies.”

Most earlier lexicographers sought to lay down rules for usage and spelling, but Johnson sought more to reflect current usage, to reflect rather than dictate the accepted meaning, explaining in his Preface that no scholar “can embalm his language and secure it from corruption.”

Said Johnson: “No dictionary of a living tongue can ever be perfect, since while it is hastening to publication some words are budding, and some falling away.”

Today’s dictionaries, likewise, make little attempt to dictate, only to reflect the ever-changing meaning of words.

Johnson was the first to use illustrations of word usage gleaned from “the best writers,” as do many modern lexicographers. Because of the extensive research involved in gathering the illustrations, Johnson’s work, planned to take three years, eventually required eight.

After his long years of toil, Johnson was piqued by an article written by Lord Chesterfield, the statesman and author, in which the Earl claimed undue credit as the patron of Johnson’s dictionary. (Chesterfield had actually sent Johnson a ten pound subscription for the dictionary in 1747.) “I have been pushing on my work through difficulties, of which it is useless to complain,” Johnson wrote in his now-famous letter to Chesterfield, “and have brought it, at last, to the verge of publication, without one wit of assistance, one word of encouragement, or one smile of favour . . . Is not a Patron, my Lord, one who looks with unconcern on a man struggling for life in the water, and, when he has reached ground, encumbers him with help?”

Although English dictionaries had been published in America as early as 1788, the first English dictionary compiled by an American was A School Dictionary, brought out in 1798 by a Connecticut teacher named, appropriately enough, Samuel Johnson, Jr.

In 1806, another Connecticut resident, Noah Webster of New Haven, issued A Compendious Dictionary of the English Language with some 40,000 words. But the most important milestone in American lexicography came in 1828, when Webster published his masterpiece, An American Dictionary of the English Language, with about 70,000 entries. Webster’s work was the first American dictionary to gain wide acceptance in both the United States and England.

You may be confused by the plethora of dictionaries on the market bearing the name “Webster’s.” The fact is none of these books, or at least, very few, are directly derived from the work of Noah Webster. The word “Webster’s” has become merely an identifying title, like the word “dictionary” itself, and cannot be copyrighted. Anyone at all can publish a book and call it “Webster’s Dictionary,” although the G&C Merriam Company of Springfield, Massachusetts, claims that their dictionaries are the legitimate successors to Webster’s works.

Many stories have been told about the famed American lexicographer, most of them apocryphal. Witness, for example, this droll tale:

One day Mrs. Webster entered the parlor to find her husband locked in an embrace with the maidservant. “Noah!” she sputtered, “I am surprised!”

Noah disentangled himself and quickly regained his professional composure. “No, my dear,” he told his wife, “It is I who am surprised. You are merely astonished.”

Many other dictionaries have come and gone since the days of Webster and Johnson, but the greatest English dictionary on either side of the Atlantic remains the Oxford English Dictionary, conceived in the mid-nineteenth century but not completed until 1928. The Oxford lists all recorded English words, and their varying usages from the seventh century through the twentieth. Thus, a simple word such as “place,” due to its many uses and its long history of change, might occupy twenty or twenty-five small print pages. Compiled with the aid of hundreds of research assistants in both England and America, the Oxford remains the largest dictionary in the world. Its twelve volumes contain about 415,000 words, almost two million illustrative quotations, and close to 228 million letters and figures!

A glance at a card catalogue in any large library will suggest the tremendous range of dictionaries now available, covering almost every specialized vocabulary imaginable. Witness, for example, A Dictionary of the Stitches Used in Art Needlework, or Dictionary of the Underworld: the vocabulary of crooks, criminals, racketeers, beggars and tramps, convicts, the commercial underworld, the drug traffic, and the white slave traffic.

And then there’s the Dictionary of Waste Disposal and Public Cleansing, published, natiirlich in Germany.

The number of dictionaries in existence today is difficult to calculate, but in English, there is a dictionary for most of the 5,000 foreign languages spoken throughout the world today.

How many words are there in the dictionary? First of all, no English dictionary but the Oxford claims to include anywhere near all the words in the language.

The word “unabridged” in a dictionary title does not mean the work contains all the words in the language, but merely that the book includes all entries appearing in earlier editions of the work.

English, the second most commonly spoken language in the world after Mandarin Chinese, contains the largest vocabulary of any language on earth, an estimated 800,000 words, of which the average person uses only about 60,000. Webster’s Third International Dictionary contains about 450,000 entries.

Schoolboy wisdom holds that antidisestablishmentarianism (28 letters) is the longest word in the language, but the Oxford English Dictionary includes the word floccipaucinihilipilification (29 letters). The word means “the action of estimating as worthless.”

The longest word in common use is generally thought to be dispro portionableness (21 letters). And the longest chemical term ever used, the name of an amino acid compound, contains some 3,600 letters.

However, as any lexicographer with a sense of humor will point out, the longest word in our language is actually smiles, because there’s a mile between the first and the last letters!

Incidentally, excluding proper names, the oldest word in the English language still in use in a comparable form is land, derived from the Old Celtic landa, “heath.” This word is thought to have been in use on the European continent well before the beginning of the Roman Empire.

The dictionary is easily the most useful reference work ever created, competing perhaps with the Yellow Pages. But there are a number of languages in existence today that are not likely to be recorded in a new dictionary. Why? Well, there are now about twenty languages in which no one can converse, for the simple reason that there is only one speaker of the tongue still alive. Eyak, an Alaskan Indian language, is certainly one of the most moribund “living” languages on earth, spoken only by two aged sisters when they chance to meet!

2 thoughts on “The History of the Dictionary”