What Are the Different Compartments In My Fridge Used For and What Does the Crisper Do?

Every time I open the refrigerator door, Alex, my Siamese cat, eyes the contents like Willie Sutton peeking into Fort Knox. He knows that that big, white impregnable strongbox contains all the pleasures life has to offer. (He’s neutered.)

We humans aren’t much different. Our refrigerators are our treasure houses. Their contents reflect our individual lifestyles even more than the clothes we wear or the cars we drive.

The main purpose of a refrigerator, of course, is to exhibit every silly object that can conceivably be glued to a magnet, not to mention the scribbled “art” of children or grandchildren. But in addition, refrigerators produce low temperatures, and low temperatures slow down every process that spoils food, from chemical enzyme reactions to the ravages of living spoilers such as bacteria, yeasts and molds. 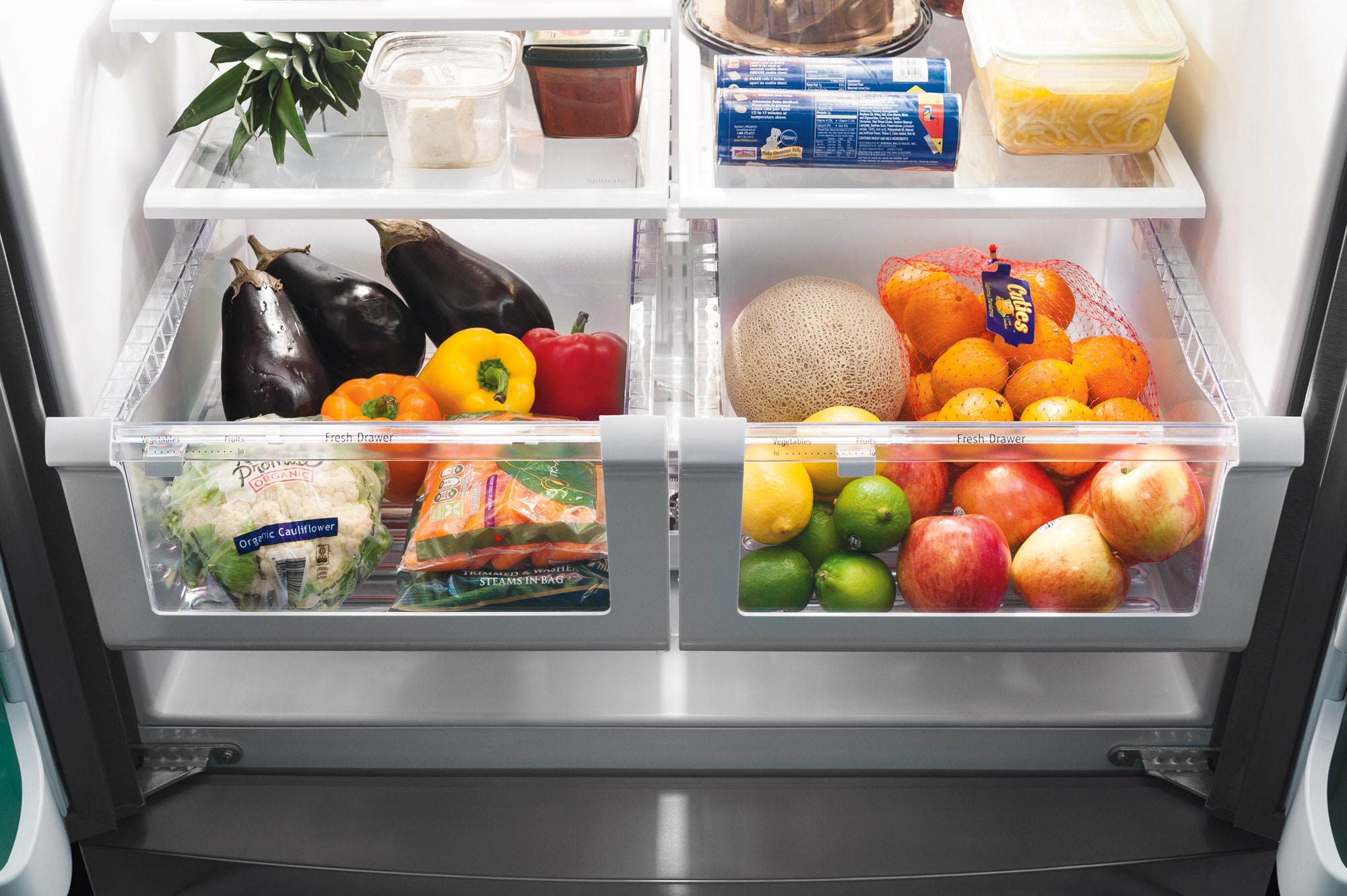 There are two kinds of bacteria that we want to inhibit: pathogenic (illness-causing) bacteria and spoilage bacteria. Spoilage bacteria make food repulsive and inedible, but they generally won’t make us sick. Pathogenic bacteria, on the other hand, may be completely undetectable by taste or appearance, but are still dangerous. Low temperatures inhibit them both.

And now, Alice, would you like to take a tour of Refrigerator Wonderland? Just drink this bottle labeled “Drink Me” to make you small, and follow the white rabbit into the fridge.

White Rabbit: Exactly. We’ve landed in the freezing compartment, which is often at the top because any cold air leakage will fall down and help cool the lower parts.

A: Just how cold is it in here?

WR: A freezing compartment should always be at 0°F or colder. That’s 32 degrees below water’s freezing temperature.

A: How can I tell if my freezer at home is cold enough?

WR: Buy a refrigerator-freezer thermometer, which is specially designed to be accurate at low temperatures. Nestle it among the frozen food packages in your freezer, close the door, and wait six to eight hours. If the thermometer doesn’t read within a couple of degrees of zero, adjust the freezer’s temperature control knob and check again six to eight hours later.

Now let’s climb down into the main part of the fridge, where it’s quite a bit warmer. A: You call this warm?

WR: Everything’s relative. Outside in the kitchen it’s at least 30 degrees warmer. The refrigerator mechanism is removing heat from the box we’re in, but heat is energy, and you can’t just destroy energy; remove it from one place and it has to go someplace else. So the refrigerator throws it out into the kitchen. The Mad Hatter claims that a refrigerator is really a kitchen heater, and he’s right. In fact, a refrigerator puts out more heat than it removes from its interior, because the removal mechanism creates heat. That’s why you can’t cool off the kitchen by leaving the refrigerator door open; you’d just be moving heat around from one place to another and even adding some, but not getting rid of any.

A: How does the refrigerator remove heat?

WR: It contains an easily vaporizable liquid called Freon, or at least it did before scientists discovered that Freon destroys Earth’s ozone layer; new refrigerators contain a friendlier chemical with the jabberwocky name of HFC134a. Anyway, when a liquid vaporizes (boils), it absorbs heat from its surroundings, which consequently get colder. (No room in here to explain why). When the vapor is compressed back into a liquid, it releases that heat back out again. A refrigerator lets the liquid vaporize here inside the box, cooling those metal coils you see on the wall. Then it compresses the vapor to a liquid again (that humming you hear is the compressor motor), and dissipates the resulting heat outside the box, through a maze of coils tucked away behind or beneath it. A thermostat turns the compressor on and off as needed to maintain the proper temperature.

A: What is considered proper for a temperature?

WR: The main compartment of a refrigerator should always be below 40°F. Above that temperature, bacteria can multiply fast enough to be dangerous.

A: Can I use my new thermometer to measure that?

WR: Absolutely. Put it in a glass of water in the middle of your fridge and wait six to eight hours. If it doesn’t read 40ºF or below, adjust the refrigerator’s main control knob and check the temperature again six to eight hours later.

A: I’m certain that any refrigerator of mine will prove to be at precisely the proper temperature, thank you. But whatever shall I keep in it?

WR: You know, the usual stuff. Live crabs, it sedates them so they don’t throw off their claws when you steam them; tablecloths with candle wax on them, you can scrape it off after it gets hard;

damp laundry in a plastic bag whenever you can’t iron it right away; old corsages…

A: All right, smarty. Is there anything that should not be kept in the refrigerator?

WR: Yes. Tomatoes lose flavor when chilled below about 50ºF because an important flavor chemical dissipates. Potatoes get unpleasantly sweet because some of their starch turns to sugar. Bread dries out and gets stale if not tightly wrapped, yet mold spores might grow inside a plastic bag. Best to freeze it. And a large amount of leftover food that is still warm can raise the fridge’s temperature to a dangerous, bacteria-friendly level. Divide it up into small, easily cooled containers and chill them in cold water before putting them in. Don’t let them cool on the counter, because they’ll be at a dangerous temperature too long.

Alice, watch out! You’re too close to the edge of the shelf!

A: Help! I’ve fallen down into this drawer. Where am I?

WR: You’re in the crisper.

WR: It’s only for fruits and vegetables, and it controls humidity, rather than temperature. Vegetables will dry out and get flabby unless the humidity is kept relatively high. The crisper is a closed box that keeps water vapor in. But fruits require a lower humidity than vegetables, so some crispers have adjustable openings that you’re supposed to readjust every time you change the contents.

A: Yeah, sure. Now what’s that other compartment below us?

WR: That’s the meat keeper. It’s the coldest part of the fridge, except for the freezer. It’s at the bottom of the fridge because cold air sinks. Meats and fish have to be kept as cold as possible, but fresh fish shouldn’t be kept more than a day anyway.

And speaking of meats, I’m late for a very important “meating.” Here. Drink this other bottle of “Drink Me” to make you big again and we’ll get out of here.

Don’t forget to turn out the light.