What Happens When You Pack Too Much Weight on a Llama Used as a Beast of Burden?

It is highly unlike that you will hurt or injure a llama if you pack too much load on it. 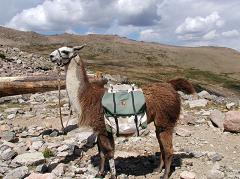 However, Llamas have this great mechanism that kicks in when you load them with more weight than they can handle. They just sit down and refuse to budge.

In the Inca empire llamas were the only beasts of burden, and many of the civilizations dominated by the Inca domesticated the llama as well.

In South America llamas are still used as beasts of burden, as well as for the production of fiber and meat.