What is Dry Ice Made of and Why Does Dry Ice Produce Smoke?

Regular ice is wet because as it melts it becomes liquid water. Dry ice is dry because it doesn’t melt. It changes directly into a gas without turning into a liquid first. Carbon dioxide simply cannot exist as a liquid at ordinary atmospheric pressure. When it finds itself in the even more unnatural solid form as dry ice, it does its best to revert directly to a gas. 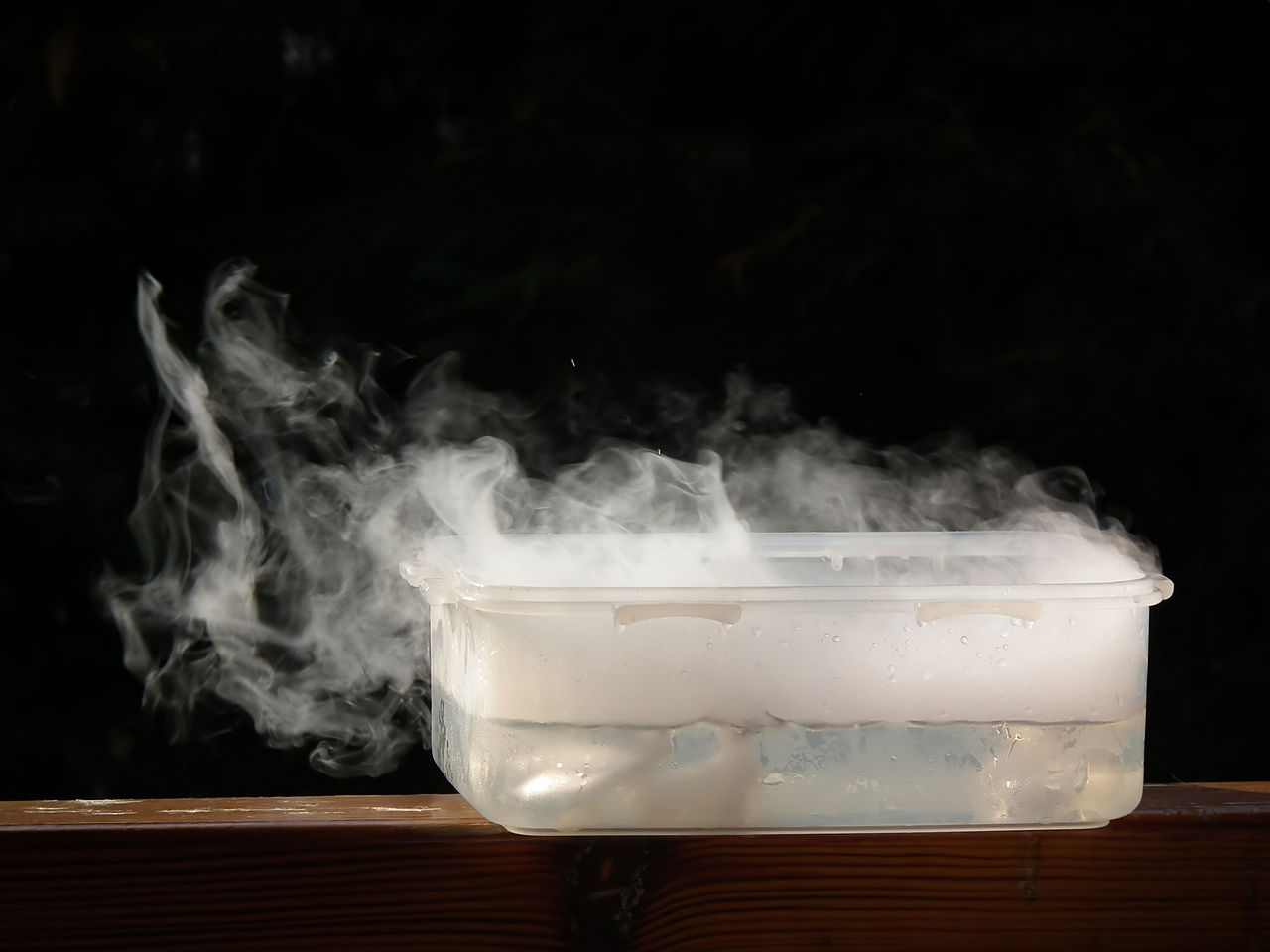 Carbon dioxide is most comfortable as a gas because in a gas the molecules are as far apart as they can get, and carbon dioxide’s molecules do not like each other very much. That is, they don’t stick together very well the way water molecules do.

In liquids, the molecules are always somewhat stuck together as they slither around, over, and under one another. But carbon dioxide molecules just don’t have the necessary stickiness to be a liquid, unless you force them so close together that they have no choice but to associate. In other words, carbon dioxide gas will become a liquid only under duress: under high pressure. Carbon dioxide is shipped around the country this way, as a liquid under high pressure in steel tanks.

CO2 fire extinguishers are nothing but tanks of liquid carbon dioxide with a squeeze valve. When you release some of the pressure by squeezing the trigger, carbon dioxide comes rushing out through the funnel. It comes out as a blast of very cold gas, mixed with a “snow” of solid carbon dioxide. If you could collect enough of this snow before it evaporates and squeeze it into a “snowball,” you’d have a chunk of dry ice. On a larger scale, that’s exactly how they make dry ice from liquid carbon dioxide.

The fire extinguisher works in two ways: The coldness can lower the temperature below the fuel’s ignition point, while the carbon dioxide smothers the fire because it’s a heavy gas that pushes away the oxygen.

Dry ice is used on movie sets to make fog. It is real fog because it consists of microscopic droplets of water suspended in the air. But you can always tell a fog forgery, because the water is very cold from the dry ice and the fog therefore lies on the ground like a blanket-unless it is blown around by an off-camera fan. Real, weather-generated fog, on the other hand, hangs fairly motionlessly in the air.

Movies also use dry ice to simulate caldrons of boiling water. Just throw some dry ice into the water, and as the solid carbon dioxide changes to gaseous carbon dioxide, the gas rises through the water as fog-filled bubbles that break at the surface and are supposed to look like steam. If you look closely, though, you can always tell that it’s fake. The microscopic droplets in fog reflect light and look white, but steam is made of bigger droplets of water that are almost transparent. Moreover, steam goes straight up because heat rises, while the cold dry-ice fog hangs low over the caldron.

While we’re on the subject of movie fakes, how about those scenes of storm tossed ships? Are they just miniature models, shot at slow motion in a big tank? There’s a surefire way to tell. Check the size of the water droplets from the crashing waves. If they’re the size of a porthole or a cannon ball on the ship, it’s a model in a tank.

Water just doesn’t break up into drops the size of cannon balls, unless the “cannon balls” on the ship are really BBs on a scale model.