Why is Ground Beef Red on the Outside but Brown on the Inside and What does it mean?

The brown-meat syndrome has been a concern of consumers ever since the neighborhood butcher, who ground the meat before our very eyes, went the way of his sawdust-covered floors.

In today’s supermarkets, the meat is ground somewhere “in the back,” or even at another location, and then packed into plastic trays and covered with plastic film. In some markets, it may languish in the cooler for a day or two, then sit even longer in your refrigerator before you get around to opening it and discovering that the inner meat is an unappetizing gray-brown. 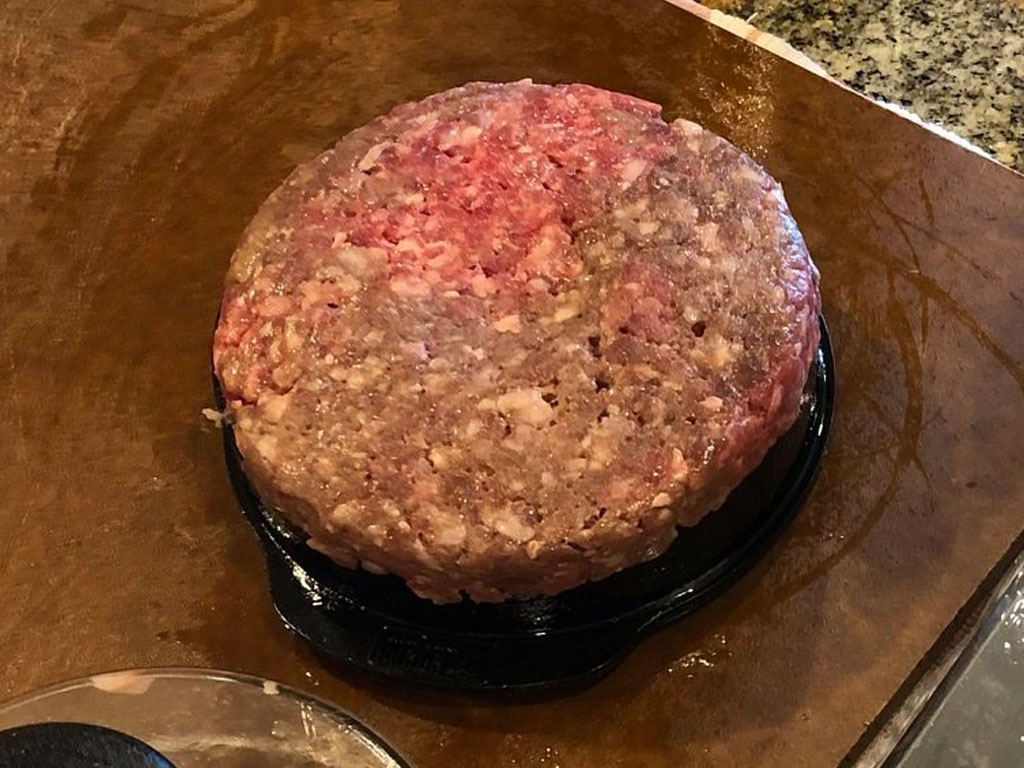 The chemistry of meat color, any meat, is a bit complicated, and what we call “red meat” could give a chameleon a run for its money. But in a nutshell, the color of meat depends largely on the relative amounts of three colored proteins, just as when an artist mixes three pigments on the palette to achieve a desired hue. The three proteins are deoxymyoglobin, the deep purplish-red color of freshly cut beef; oxymyoglobin, a bright pinkish-red; and metmyoglobin, a grayish brown color. (There are other forms of myoglobin, but these are the main ones.)

These three pigmented chemicals are in dynamic equilibrium with one another, meaning that they are all interconvertible. Their relative amounts at any given time depend on the availability of oxygen, enzymes, and antioxidants. But none of these three colored compounds has any effect on flavor or wholesomeness. It’s purely a matter of cosmetics.

Pork and veal don’t contain much myoglobin in any form, but beef contains much more, and the markets struggle to keep it for as long as possible in the consumer-friendly, bright-red oxymyoglobin form. But how?

First of all, there must be oxygen available to convert the fresh meat’s purple deoxymyoglobin into either red oxymyoglobin or brown metmyoglobin. Which of these two will predominate depends mainly on the amount of oxygen available to the meat. When there is virtually no oxygen at all, as in vacuum packaging, the meat retains its purple deoxymyoglobin color. You’d think that would solve the brown-meat problem, but unfortunately, consumers don’t like purple; they want red. Vacuum packaging therefore has only limited uses in retail sales of fresh (not cured) meats.

When only small amounts of oxygen are available to the meat, brown metmyoglobin is the chemically favored form. That’s why the surface of beef exposed to the open air may exhibit bright red oxymyoglobin, while the oxygen deprived meat underneath will slowly turn brown. At most retail markets, meat is packaged in rigid plastic trays over-wrapped with an oxygen-permeable plastic film, usually polyvinyl chloride. The surface gets plenty of oxygen and is nice and red, but the oxygen can diffuse only so far down. The deeper you go, the browner the meat is.

And by the way, have you noticed those juice-soaked absorbent pads beneath the meat in some of those trays? They’re not just mattresses to keep the meat comfy. They’re there to absorb wetness, known in butcherese as weep or purge. Obviously, it consists of juices that have “wept” out of the meat while standing, carrying along some of its water-soluble proteins and nutrients and thereby compromising its flavor and nutritional value. You don’t want that. So choose packages whose mattresses are dry, not red with juices. A dry mattress means that the juices are still in the meat, where you want them.

There is some truth to your supermarket’s claim that the brown interior meat will turn red again when exposed to air at room temperature (refrigeration slows the transformation down). The metmyoglobin may indeed react with oxygen and revert to oxymyoglobin, but that’s a slow and incomplete process, even if you spread the meat out in a thin layer for maximum oxygen contact, and that’s obviously not a good idea on sanitation grounds. Remember, though, that you’re going to make the meat even browner when you cook it, so why bother? The heat of cooking not only browns the meat by Maillard reactions but encourages the conversion of oxymyoglobin to metmyoglobin.

A second major factor in the red-to-brown conversion of beef is that both the deoxymyoglobin and oxymyoglobin proteins contain a lone iron atom buried deep within each of their large, globular molecules. The iron atom is normally in what chemists call the reduced, or ferrous, form. But if the iron atom is changed into its oxidized or, form, the molecules lose their purple or red colors and turn brown. Antioxidant enzymes in the meat normally keep this change from happening, but if the meat is stored too long, even at refrigerator temperatures, the enzymes’ activity diminishes and browning is facilitated.

This “old-age” browning, often accompanied by an off flavor, is what people think of when they see meat that isn’t red. But as we’ve seen, browning can come also from a harmless deficiency of oxygen in fresh meat. The meat isn’t really bad until bacteria get hold of it, in which case it will probably also have an off odor. So let your nose be your umbrella. (No offense, Cyrano.)

When bacteria do take up residence on the meat’s surface either before, during, or after it has been ground, other browning, and decaying, reactions take place. Spoilage bacteria not only can turn red oxymyoglobin into brown metmyoglobin, but they can then turn the metmyoglobin into green choleglobin and sulfmyoglobin. And you already know that when you see green, your feet should beat a fleet retreat from the meat. Morever, in producing sulfmyoglobin from metmyoglobin the bacteria release hydrogen sulfide, a notoriously smelly gas.

If you’re a suspicious type, poke a hole in the meat package as soon as you leave the market. Take a sniff through the hole while you can still storm back into the market in high dudgeon. (Is there a low dudgeon?)

A quality market will watch its ground-beef supply lines carefully, grinding and putting out just enough to keep up with sales. That way, it will always be oxymyoglobinred at the time of sale. If the meat is allowed to begin losing its bright red color, shoppers tend to reject it even if it is not old-age brownness but merely lack-of-oxygen brownness. The retailer still has to mark it down in order to move it. That can be a boon to savvy or budget-conscious consumers.

The meat industry, of course, wants to minimize these color related losses of revenue. One oft-used preemptive tactic has been to feed the cattle vitamin E, an antioxidant, before sending them off to meet their maker. Antioxidants prevent the iron atoms in the myoglobin molecules from becoming oxidized to the ferric form.

But the industry has yet to work out what is to them a vexing economic problem: The feedlot operators have to bear the cost of the vitamin E-laced feed, while it’s the retailers who benefit from increased sales. In my opinion that’s just too bad, and I refuse to lose any sleep over it. The way things have been going, it will probably be solved when a single, huge agribusiness conglomerate owns everything from the cattle ranch to the meat cases in your supermarket. From cradle to beyond the grave, so to speak.

Or, in an alternative universe, small, local meat farmers will increase in number, so that all our meat will be fresh and look fresh, without having been shipped thousands of miles and having its colors manipulated at the marketplace.