What is the Best Way to Cut Onions without Crying and What Chemical causes the Tears?

What makes us cry is all the misinformation going around about onions, primarily about what causes the eye irritation and how sweet onions differ from ordinary ones.

The tear-producing chemical (the lachrymator) in onions is not pyruvic acid, as has too often been stated in print. Nor does pyruvic acid “come from sulfur in the soil,” as has also been frequently asserted, because pyruvic acid contains no sulfur. Nor does the lachrymator consist of sulfonic or sulfurous acid or any of the other often-blamed chemicals.

Indeed, it is not an acid at all. It is a sulfur-containing compound called thiopropanal sulfoxide, a.k.a. thiopro pionaldehyde -s-oxide, which I shall henceforth refer to as compound T, for tear gas. 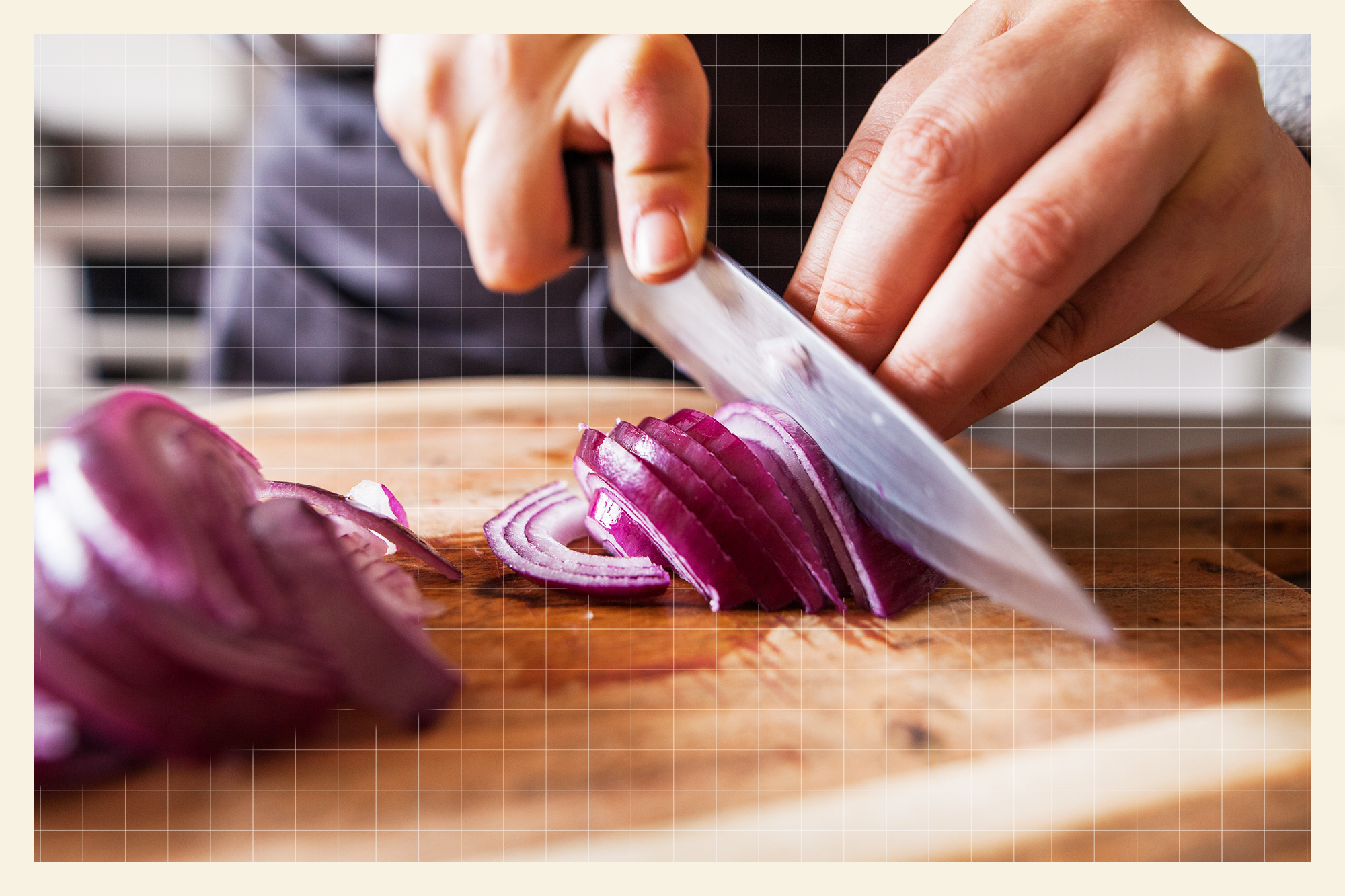 While knowledge of that fact isn’t going to change your life, the record has long been in need of being set straight. So there.

Many people apparently think that there is a single chemical in onions that both irritates our eyes and gives us the flavor effect of pungency, a hot, sharp, and stinging sensation in the mouth. But these two effects are largely due to different compounds. Compound T is not primarily responsible for the onion’s pungency, as is commonly stated in the popular food literature. Nor are the most pungent onions necessarily the most notorious tearjerkers.

Here is an oversimplified account of the complex chemical reactions that take place when you cut an onion.

Neither the tear gas compound T nor the pungency compounds exist as such in the uncut onion. They are formed when the cells are broken open by cutting or chewing, at which time the enzyme alliinase (A) and a group of compounds known as S-alk(en)yl cysteine sulfoxides (S), which until then had been isolated from each other in different parts of the onion’s cells, are liberated. They then react with each other to form the tear gas: A + S –> T.

A different set of alliinase-activated reactions produces a mixture of ammonia, pyruvic acid, and unstable sulfenic acids. The sulfenic acids react further to form a number of flavor and pungency compounds, primarily alkylthiosulfinates.

The amount of pyruvic acid formed in the last two reactions is generally used as an index of pungency, but only because it is stable and easy to measure in the laboratory. It is not itself responsible for the pungency of onions.

And now for a few of what Dave Letterman might call “stupid onion tricks,” measures that are often claimed to prevent tears while cutting onions. After reading my parenthetical comments, you can decide how much sense the tricks make.

• Cut the stem end off before the root end. (Any onion with half an IQ will remember the cutting order and behave accordingly.)

• Let a stream of cold water run in the sink while you do the cutting. (When the onion vapors see the water they will rush toward the sink to drown, even if it’s halfway across the room.)

• Clamp a wooden match between your teeth. (You’ll never notice your eyes stinging if you bite on the match head.)

• Keep a piece of bread in your mouth. (And make sure to chew it ostentatiously, so the onion will know it’s there.)

• If you wear contact lenses, remove them because the irritating vapors can get behind them, preventing the tears from washing them out.

• Cut or chop your onions under water. You may either fill the sink with water and do your cutting beneath the surface, or put on your scuba gear and take the job to the swimming pool. (These methods should work, except for the little problem of the onion pieces floating away before you can collect them.

But seriously, folks, here’s the most practical and effective method of all (fanfare, please, Maestro): Chill the onions in the refrigerator for a couple of hours before cutting. This slows down the chemical reaction that produces the tear gas and lowers its vapor pressure (its tendency to float around).

Best of all, just learn how to dice an onion as quickly and efficiently as the chefs do, and there won’t be time for the irritating vapors to bother your eyes very much. Several cookbooks illustrate the technique. And remember that using a very sharp knife will break fewer cells and produce less tear gas.

An effective, inexpensive knife sharpener made by Fiskars of Finland. The ingeniously angled abrasive wheels remove a minimal amount of metal. Available by the name “ASPEKT” at IKEA.

And speaking of sharp knives, everyone swears by his or her pet sharpening device, sometimes to the point that swearing can actually occur when two chefs defend their favorite methods. But I have found that a fancy, expensive sharpener isn’t at all necessary.

The inexpensive device does an excellent job, especially if you follow it with a few swipes on a “sharpening steel,” which straightens out any microscopically wavy edge left by the sharpener.