Technically, there is no such thing as female peacocks. 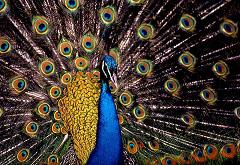 The birds are known collectively as peafowl, the males are called peacocks, and the females are peahens.

The peahen cannot raise her feathers.

As a matter of fact, she doesn’t have much to raise in the first place.

Although both sexes of peafowl share a crest of feathers on their heads, the female completely lacks the train of long feathers sported by the male.

Peafowl are best known for the male’s crazy big tail, or plumage, which it displays as part of courtship.

The bright peacock logo made its first on-air appearance on May 22, 1956, and was adopted due to the increase in color programming.

In the Azidi religion, Melek Taus is a major figure in their faith, and is depicted as a Peafowl.

Peacocks were also associated with the ancient Greek god Hera.

2 thoughts on “What is the Difference Between Peacocks, Peahens and Peafowl and Can All of Them Raise Their Feathers?”