What is the Difference between Wild Mussels and Farm Raised Mussels?

“Wild” mussels have grit in them, which is probably sand, and the “strings” are remnants of their beards, which are routinely removed from the “domesticated” (tame?) ones before they reach the market.

Mussels don’t burrow in the sand as clams do, cement their shells to each other as oysters do, or swim freely as scallops do. They anchor themselves to something stationary by means of a byssus, or beard, a clump of tough threads that they manufacture by extruding a liquid protein that hardens in seawater and sticks better than Super Glue to almost anything.

In fact, scientists have been trying to reproduce it in the laboratory for possible use in gluing people back together after surgery. 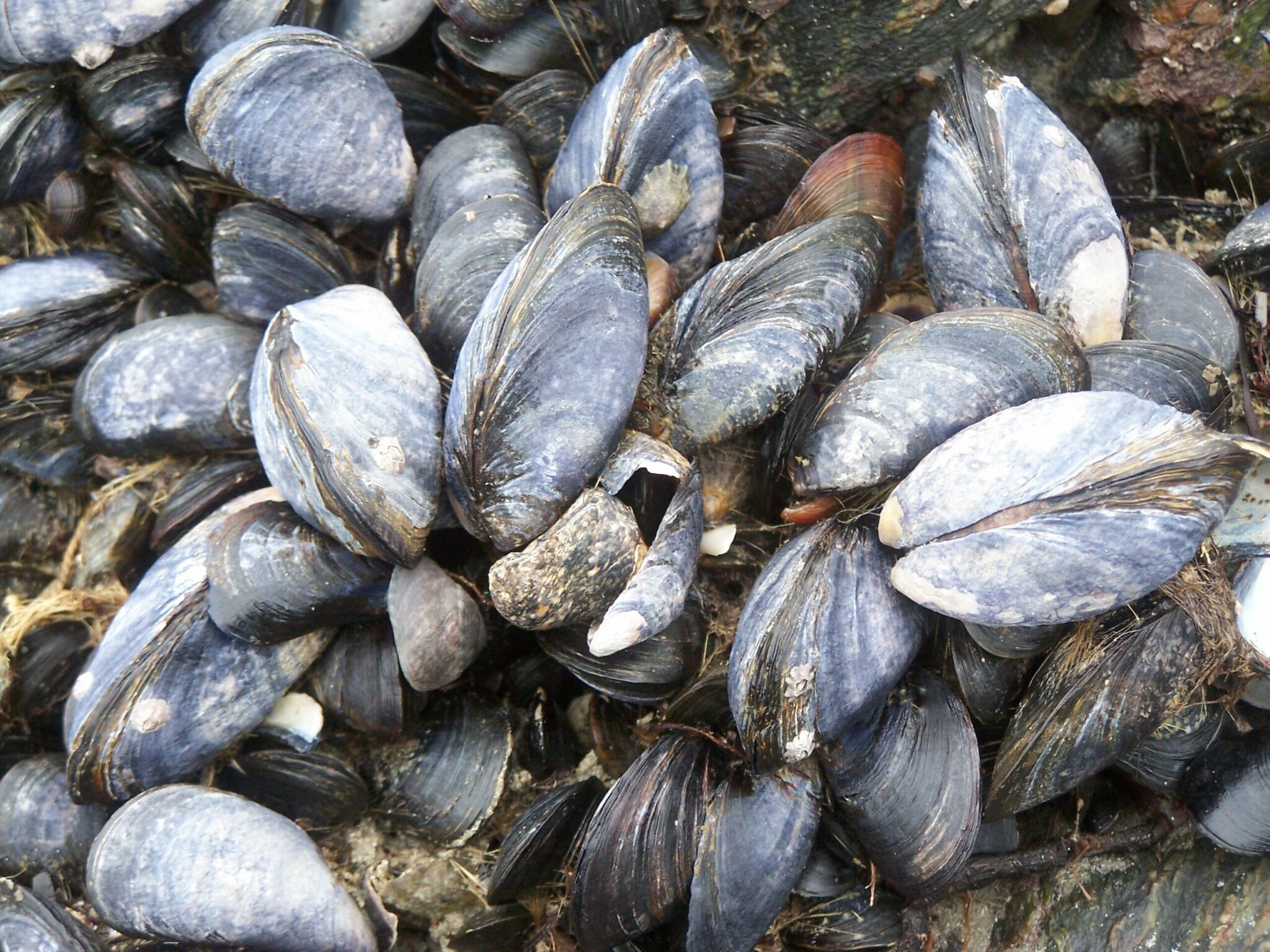 Mussels are raised on underwater hanging hemp ropes in Spain, on bamboo poles in Thailand, on oak boards in France, on “longlines” (Paul Bunyan-sized socks hanging from an underwater clothesline) in Sweden and Canada, and on shallow ocean bottoms in the Netherlands and Maine.

In these environments they pick up little if any sand. Their beards are clipped by machine before they’re sent to market, although you may still have to yank a few. Otherwise, cultivated mussels need no cleaning beyond a cold-water rinse. Any whose shells gape open and don’t close when tapped sharply with one of its brethren are dead, and should be discarded.

In the bottom-culture method used in Maine, wild, inch-long baby blue mussels are dredged from selected natural locations and sown by being scattered thinly onto leased beds where, not having to compete for food in the sea-floor jungle, they will grow to two to three inches in 18 to 4 months. In the wild, it might take them 7 to 8 years to reach that size. (If successful at evading ducks, crabs, starfish, and humans, mussels will live for 12 to 13 years, with some growing as old as 20.) Pampered and plump, cultivated mussels in the shell will be at least 25 percent meat by weight, whereas wild ones rarely exceed 15 percent.

Anchored as they are, mussels must depend for food on whatever the ocean currents bring them. Like clams and oysters, they feed by constantly taking in water and filtering out particles of plankton. A typical two-inch-long blue mussel may process 10 to 15 gallons of water per day. Unfortunately, its filtering system can also trap bacteria and other toxic microorganisms. That’s why mussels from polluted waters are so dangerous; bacteria can pile up in a mussel like dirt in a vacuum-cleaner bag. Cultivated mussels are raised in carefully monitored waters.

There are seventeen known species of edible mussels in the world. The one that you’ll see most often is the Atlantic blue mussel (it’s actually blue-black), Mytilus edulis, which is raised mostly in the waters off Maine and Prince Edward Island, Canada. A similar species, Mytilus troesselus, is grown in the state of Washington. But from May through July, the blue mussels are likely to be devoting all their energies to spawning, which makes them weak and flabby and not good to eat.

Fortunately for mytilophiles, the Mediterranean mussel, Mytilus galloprovincialis, which is being cultivated on the West Coast, spawns in January and February, so it’s good eatin’ all summer. It is mild, sweet, plump, and big, ranging up to seven inches long and up to 60 percent meat at its peak.

Another kind of cultured mussel becoming more available in the United States is the greenshell, Perna canaliculus from New Zealand and Perna viridisis from Southeast Asia. The genus Perna has only one muscle, the adductor muscle, holding its shells together, while the genus Mytilus has two.

The greenshells, which measure three or four inches long, are edged with a startling emerald-green color, but the meat is the usual cream or orange color. (Male mussels are usually cream-colored; female mussels are more likely to be orange.) Because greenshell mussels are shipped frozen, you can find them year-round.

Even the blue mussels from Maine are now available year-round, because mussel beds in slightly different locations spawn at slightly different times, and the clever farmers can select the non-spawners for harvesting throughout the summer. You may now eat mussels in all months except those that have q’s in their names.