What Makes a Skunk Smell?

The bad-smelling odor of skunks is contained in a liquid which the animal produces and then discharges if it is frightened or in danger.

The liquid is called musk.

Musk is produced by two glands near the base of the skunk’s tail. The scent glands produce enough musk for six consecutive discharges. 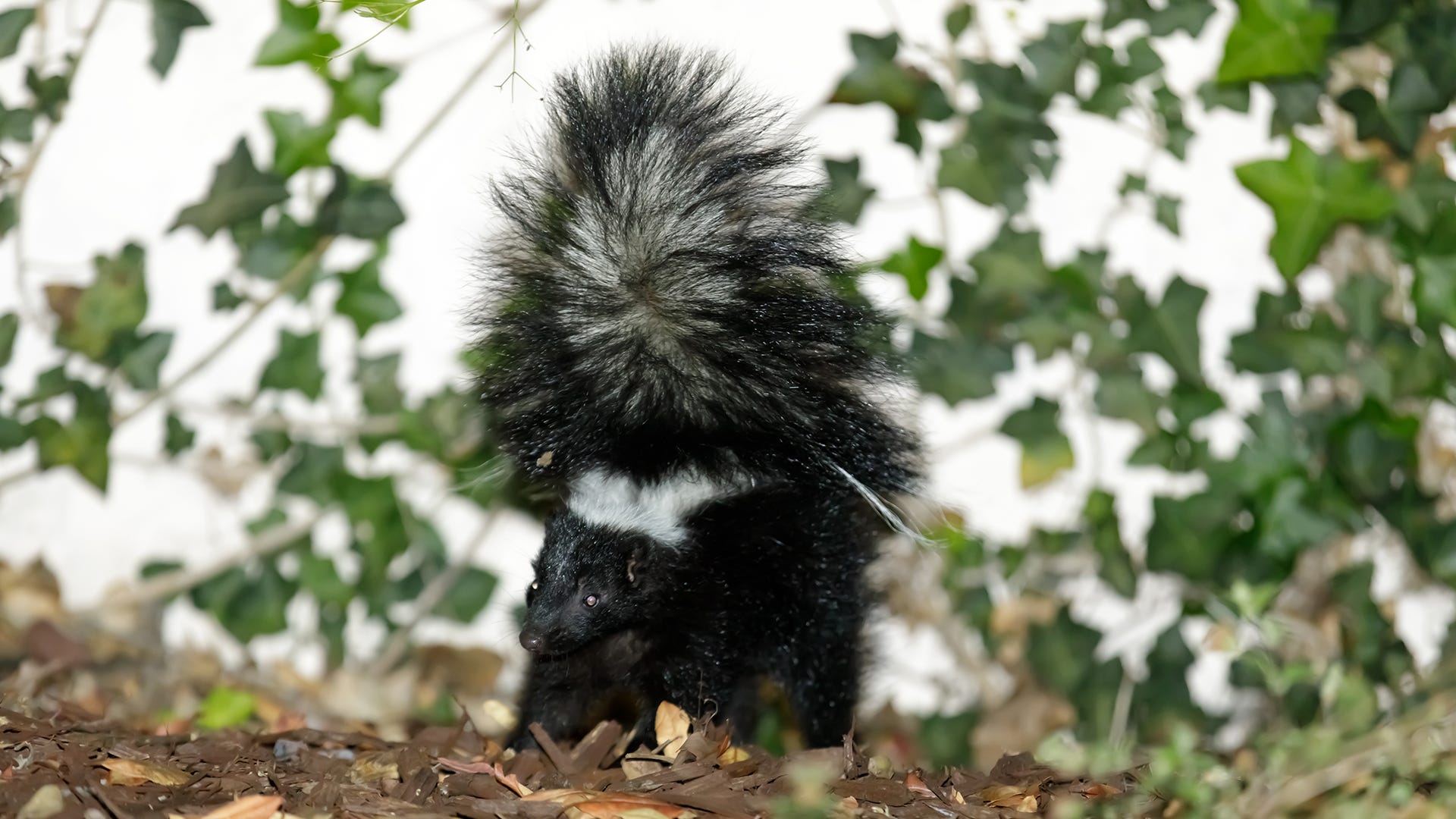 Until more liquid is produced, the skunk is defenseless.

If a skunk’s first warnings to its enemy, growling and stamping its front feet, are not heeded, it turns its back, lifts its tail, and sprays its liquid toward the enemy.

Only a little liquid is discharged, sometimes no more than two or three drops, but it is so powerful, it can be smelled for a half-mile. The skunk can spray accurately at an enemy as far as 12 feet away. In addition to smelling bad, the liquid can sting or burn the eyes.

Amazing, isn’t it, when the odor has been removed from skunk musk, it makes an excellent base for, of all things, perfume.

Why Do Skunks Smell Bad?

You might be wondering why skunks smell bad in the event that you’ve been confronted with one. Skunks are animals that sleep, and they release their scent by way of oily spray. Thiol, a sulfur-based compound that can cause skin irritations and other health issues is the reason for the smell. It can cause headaches and burning eyes. It can cause cornea damage, even though it may not affect your vision.

Like many species, skunks are nocturnal, meaning they stay awake during the night. Skunks have evolved a nocturnal lifestyle to protect them from predators, specifically birds. Skunks are small and can be easily snatched up by birds. It is important to keep them away from your path. The good thing is that skunks are able to defend themselves.

Skunks can be found in the Bay Area during the fall or winter months, when they’re most active. You can smell their scent up to 3.5 miles away. The more powerful the odor, the closer the skunk is. If you wish to keep skunks out of your home, you should avoid their dens.

While skunks don’t attack They do emit strong odors. They can spray at a threat when they feel threatened. This is a signal that they feel threatened and will attempt to flee. They’ll also scream and stamp their feet. But that’s not enough. If you’re concerned, skunks are only out during the night. If they do come out, they’ll spray you at a distance of 10 feet.

The good aspect is that skunks are helpful in controlling poisonous snakes. The venom in a rattlesnake is not effective in the skunk’s body, so they prefer to eat it. They are also a valuable part of the wildlife population, because they feed on honey, bees and snake larvae. They can also harm gardens and pets. This is why it is important to manage the skunk population.

Skunks release musk from glands under their tail

Despite their foul-smelling musk, they do not harm humans, although they do occasionally attack other animals in search of food. Skunks are often taken by golden and bald Eagles. Other mammal species, like foxes and bobcats are also not frequently attacked by skunks.

In some areas of the U.S., and the southern part Canada, striped Skunks have an annual breeding season during the winter. Male skunks will roam across the country looking for a mate. The young of a striped skunk could be treated with musk within only a few days after birth. For the first winter, they usually stay with their mothers. Although male skunks don’t go into dormancy (they do hibernate), they rely on summer fats to survive.

The chemical composition of skunk’s musk varies between species. Its strength is determined by sulfur compounds. These compounds include thiols, Acetates, and other. The musk of a skunk contains a significant amount of odorous substances, including the nipples and thiols. These compounds are the cause of the smell of a skunk.

The first thing you need to know about skunks, is that they don’t spend all day looking for predators. Instead, they use their distinctive spray colors to scare away predators. However, despite their instinctual defense, skunks aren’t using their spray immediately. The warning colors they use take time to develop. Before spraying, they have to undergo a series of behavioral warnings.

Three thiol compounds are found in the musk glands of a skunk’s fur. To be recognized by the human nose the thiol compounds must have at least 10 parts per million. Spray skunks can only produce little musk. The scent lasts for 10 to fifteen days, before the glands begin to produce more musk.

Although skunks don’t typically spray humans, they can spray when they’re fighting for a partner. They typically employ claws and teeth to fight, so it’s unlikely that you’ll see them spraying you on the street. They’re also not likely to spray you, and you’ll be left with an unpleasant odor that you have to contend for a long time.

The spray of a skunk acts as a defense mechanism. It also helps protect itself from attack by pushing other animals away. It is crucial to know the right precautions to take when handling an Skunk. It is best to stay clear of areas where people might be attracted to it. Wear gloves when handling a skunk. It is not advisable for them to spray your pets.

A Skunk’s spray can cause cornea damage

The skunk’s spray can cause cornea damage in dogs. Dogs suffering from cornea damage could experience watery eyes, redness or conjunctivitis. It could even be blind for a short period of time. The dog should be kept warm in case spray gets into the eye. If the eye is hurting the veterinary intervention may be necessary. There isn’t a definitive solution to this problem however antibiotics are suggested for the affected dog.

An animal instinctively blinks when it senses that something is approaching. If a skunk sprays, this reflex is disrupted. The skunk’s spray can get into the eyes quickly creating redness and irritation. If the spray is able to get into the eyes of your pet then flush it out using cool water or an eye saline solution. Artificial tears may be applied to the eyes, and then gently wipe the rest of the face.

Do not approach a skunk if you spot it. This aggressive animal will defend itself. It will dig holes and eat insects to stay alive. They can also damage your plants and introduce parasites. If you are allergic to skunk spray, it can cause serious illness. If you’ve been bitten by skunk spray, you should contact an expert in wildlife management immediately.

The sulfurous odor of a skunk’s poop can travel as far as ten feet. The smell can be detected as far as 1.5 miles away. The skunks are attracted by beehives, and will attack them if they come too close. They are also protected from snake poison. Despite this, skunks are known to feed on poisonous snakes. Their eyesight is not great. They are able to sense smell and hear.

The most frequently reported skunk-related symptoms are listed below. Don’t approach the skunk living in your business or home area until it has left. Although skunks don’t attack humans, they may spray when provoked. A child’s tiny hands could confront the animal and trigger the spray of skunks. It is essential to eliminate the skunk as fast as you can.

The skunk’s spray is made up of seven different volatile compounds. These are thiols Olefins, and Acetates. Thiols are much more offensive than thioacetates but they do not mix with water. This is why the smell of skunks is so strong when they are wet. When you’re around a skunk, remember to move slowly and crouch down so that you don’t be a shadow over it.

Skunk spray can cause vomiting and nausea

If you’ve ever come into contact with a skunk spray or spray yourself, you’re aware of the unpleasantness. The smell of skunks can cause nausea and vomiting in people, as well vomiting, coughing and even lung damage. Seven different sulfur-containing compounds found in the skunk spray can have devastating and sometimes fatal effects on people. These chemicals are taken into the body through the mouth, eyes or nose. Skunk spray can cause serious health issues in the event that it damages red blood cells.

Skunk is a foul-smelling liquid that is sour and smells bad. It was first used in 2008 to control crowds in Gaza Strip. The Israeli research firm Odortec created the product. It is an artificial chemical that can be sprayed with the standard water cannon. This liquid has an incredible smell that can remain in the air for several days. It can cause nausea and vomiting in humans and animals alike.

You can throw away your clothes and other belongings away if you are near the spray of a skunk. It is best to avoid exposure to the skunk spray for more than two days. To avoid contact with wildlife, observe them from a distance. If you can, try not to touch them, as they may be irritated by the smell.