Ice Age marsupials from Australia were pretty freaky-looking for sure. 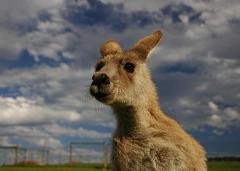 But America had some interesting creatures too during the Ice Age.

For example, the giant sloth, which resembled the modern-day tree sloth but was much bigger, about the size of a bull ox, and lived exclusively on the ground.

There was also an interesting armadillo creature that was about the size of a car. It was plated like its modern-day cousin, but featured a scary-looking ball of spikes on the end of its tail for protection.

The giant beaver, with its six-inch-long teeth, was scary looking, along with the giant flightless chicken-type bird that had arms instead of wings and was a fierce meat eater.

All of these animals died out at the end of the Pleistocene era, some 10,000 years ago, including the weird chicken, about the same time as the woolly mammoths and mastodons.

The reasons for their disappearance are still a mystery, although scientists are looking at several theories, from global warming and asteroids to deadly viruses brought by humans as they began migrating around the globe.

The Creativity Department of Lucas Productions should have a look at these animals.