Although the boy king, Tutankhamen, was a rather unimportant ruler 3200 years ago in Ancient Egypt, dying at the age of 18, the discovery of his tomb in 1922 gave the world its first “real-life” examples of these ancient peoples’ practice of burying their pharaohs with their treasures. 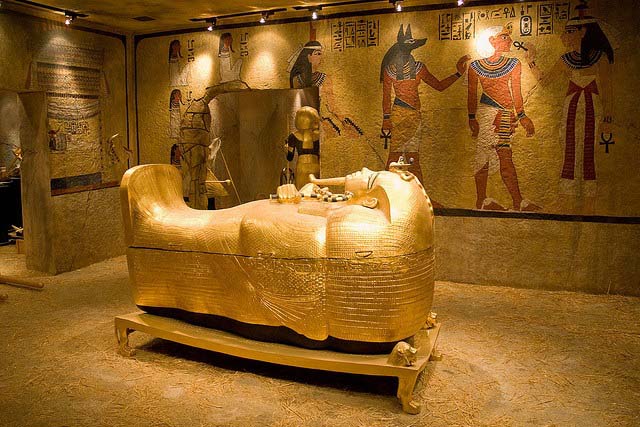 Archeologist Howard Carter had been searching for years in Egypt’s Valley of the Kings, where the remains of tombs of other pharaohs had been found. But Tut’s tomb was the first to be found completely sealed.

As Carter and his sponsor, Lord Carnavon, broke the seals on the tomb and entered the dark underground passageways and chambers, they beheld strange figures of idols, exquisite furniture, and other objects, all gold.

Opening Tut’s coffin, the archeologists discovered the mummy of the boy king, but probably because of some error made by Tut’s embalmers, the body had disintegrated. However, beneath the mummy’s wrappings were 143 pieces of jewelry made of gold and precious stones.

Tut’s body was returned to his tomb, but the treasures were placed in the Cairo Museum, and are occasionally loaned as an exhibit to other countries. From 1977 to 1979, these treasures traveled to museums in many major American cities.

The opening of Tut’s tomb started a “pharaoh’s curse”, for Lord Carnavon died almost immediately after the opening, and was followed soon after by several of the diggers who excavated the tomb.