At about two in the afternoon on July 30, 1975, former head of the Teamsters Jimmy Hoffa left his suburban home in Bloomfield Hills, outside Detroit, and drove to a nearby restaurant called Machus Red Fox.

Some forty-five minutes later, witnesses say, several gentlemen in a maroon Mercury sedan arrived at the restaurant, picked up the erstwhile union boss, and drove away. Hoffa has not been seen since.

The FBI maintains that Hoffa met his maker that day, and the courts, which in 1982 declared Hoffa “presumed dead,” take the FBI at its word. This is somewhat problematic, since the best way to prove death is to produce a corpse, and in Hoffa’s case the authorities still have not done that. 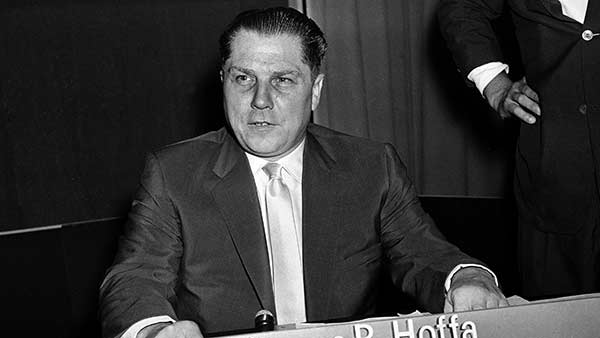 Lack of corporeal evidence, though, can be explained. In 1981, Charles Allen, a mafia hit man, testified before the Senate that, “Jimmy was ground up in little pieces, shipped to Florida and dumped in a swamp,” in which case there would be no body.

Another theory, favored by investigators, is that after slaying Hoffa, the men in the maroon sedan delivered his body to a mob-controlled sanitation plant in Hamtramck, Michigan, where it was eliminated. A number of variations on the disposal theme have been forwarded at one time or another.

One claimed Hoffa’s body was incinerated in Detroit; a second offered that Hoffa was first garroted and then run through a meat processing plant. As recently as 1989, a former organized crime associate announced that Hoffa was interred under the football field at Giants Stadium, in East Rutherford, New Jersey.

The fact that no one quite agrees on the whereabouts of the corpse, or the method of disposing of it, suggests not Hoffa’s survival but rather the morbid cleverness of mob executioners.

One point on which everyone does agree (except, perhaps, the suspect who swore Hoffa “ran off to Brazil with a go-go dancer”) is that Hoffa was murdered.

And for that crime, the feds have a motive: they argue that Hoffa planned to knock off Frank Fitzsimmons, the man who replaced him as head of the Teamsters in 1967 when Hoffa was sent to prison for jury tampering. The mob got wind of Hoffa’s plot and, since they did not want the former honcho interfering with lucrative new friendships, killed Hoffa before he could get to Fitzsimmons.

The prime suspect is Anthony “Tony Pro” Provenzano, a mafioso and ex-Teamster vice-president from New Jersey who was supposed to meet Hoffa at Machus Red Fox the day Jimmy vanished. Tony Pro had never shown up for the meeting. Provenzano, who in 1978 was convicted of ordering the murder of another union official, is now in prison.

The FBI also has evidence strongly suggesting foul play: traces of Hoffa’s blood and hair were detected in the recovered abduction car. All of this was good enough for the courts, and in 1982, at the petition of Hoffa’s son, they declared Hoffa “presumed dead.”

In Michigan, where the younger Hoffa filed the fateful petition, it takes three years for a presumed dead person to become officially dead, and so in 1985, ten years after he was last seen, Jimmy Hoffa legally died.