Where did the dodo come from and How did scientists know that the dodo was extinct?

No one has seen a dodo for three centuries. Furthermore, no one ever saw one anywhere except on the remote volcanic island of Mauritius in the Indian Ocean.

When the Portuguese arrived on Mauritius in 1507, bountiful game was there for the plucking, and so they plucked. The dodo was among the island’s many species that had lived until then in a paradise without predators.

Specialization had brought it to the point of decadence, for the birds were obese, weighing some 50 pounds each, with paltry little wings and a stubby tail. Little did this poor bird know about the arts of defense, and the Portuguese called it doudo, meaning simpleton or fool. 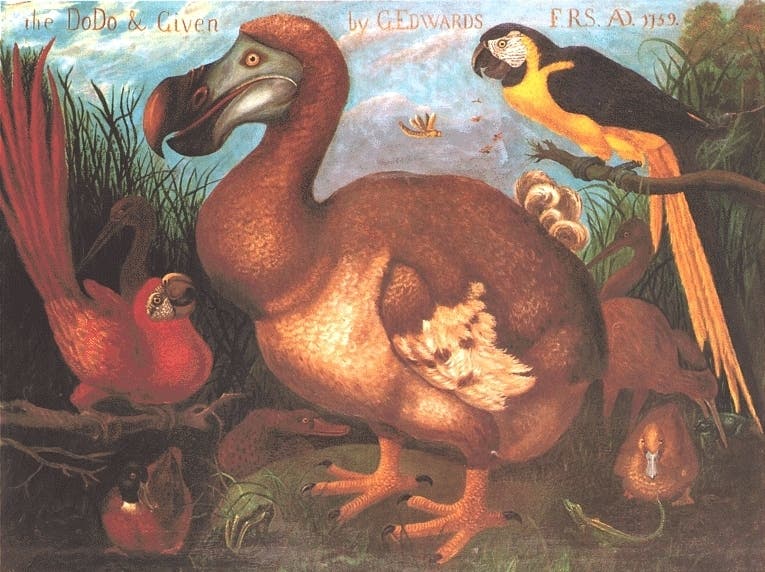 Not only did the new settlers and ensuing Dutch, French, and British sailors dine frequently on the dodo, they let loose pigs, dogs, monkeys, cats, and rats, which wreaked havoc on the indigenous species. The pigs tramped and snuffled through the underbrush, destroying precious habitats of ground-nesting birds. The monkeys easily found the dodo’s eggs, each female apparently laid only a single egg each season, exposed to the world in all its glory on a carpet of grass in the forest.

One hundred seventy-four years of colonization thus put a gruesome, irrevocable end to the species. The last sighting was in 1681. The dodo became the first species for whose extinction man was clearly culpable. Today the dodo is represented by only a head and foot, preserved in the Ashmolean Museum at Oxford University, and a quantity of bones, housed in the British Museum, Paris, Leyden, Brussels, Darmstadt, Berlin, and New York.

Since the 17th century, 22 of Mauritius’s 33 species of indigenous birds have followed the plight of the dodo. Today ornithologists are desperately trying to guard and protect those which remain. The luminous green echo parakeet with its brilliant red beak numbers only five.

Wild pink pigeons are dangerously few, and an elegant Mauritius kestrel winging over the island’s craggy volcanic crater may be one of only a dozen of its kind in the world.