The black bear is the smallest and most common species of bear native to North America. 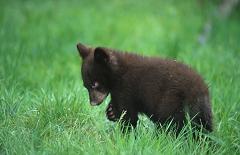 Many black bears are, in fact, black.

However, black bears come in many colors, and even the black ones often have a star-shaped white mark on their chests.

For the record, black bears can also be brown, bluish, cinnamon, beige, blond, and even pure white.

So why are they called black bears?

I suppose we can’t blame the Dutch this time, it’s because more of them are black than any other color, and before people realized that the other colors of bears were actually the same species, the name had already stuck.

The American black bear has been an inspiration for many popular cultural depictions of bears such as Winnie the Pooh.