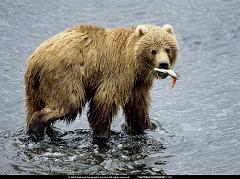 The Kodiak bear is the biggest brown bear species in the world.

The grizzly bear is the second biggest living bear in the world.

The mighty grizzly looks mighty puny when compared to the Kodiak bear, its cousin from Alaska and Canada.

The average Kodiak bear weighs about 970 pounds; the average grizzly only about 400.

That’s an average too, the biggest Kodiak ever measured was ten feet tall and 1,700 pounds.

Not that you’d want to tease a grizzly about its relative shortcomings, they’re quite short-tempered and occasionally live up to their Latin name, Ursus arctos horribilis.