Where does penicillin come from and How did scientists discover penicillin?

A visionary scientist made a serendipitous discovery and fought over a decade for the scientific community to accept it. When they did, the world received the lifesaving drug penicillin.

In 1928 bacteriologist Dr. Alexander Fleming, a modest man, son of a Scottish farmer, was working in his laboratory at St. Mary’s Hospital in London, a quiet place resembling the back room of an old-fashioned drugstore. He was studying colonies of Staphylococcus aureus, a pus-forming bacterium, attempting to isolate a pure germ culture.

One cool, damp summer day (precisely the conditions that molds take to) Dr. Fleming set aside several agar plates of his bacteria. When he later examined them under his microscope he detected mold spores, which had seemingly appeared out of nowhere, not only thriving there but dissolving his precious bacteria. “What had formerly been a well-grown colony was now a faint shadow of its former self,” wrote Fleming in his notebook. Fleming might very well have thrown away the spoiled culture in irritation, for “when I saw the bacteria fading away,” he later admitted, “I had no suspicion that I had a clue to the most powerful therapeutic substance yet found to defeat bacterial infections in the human body.” 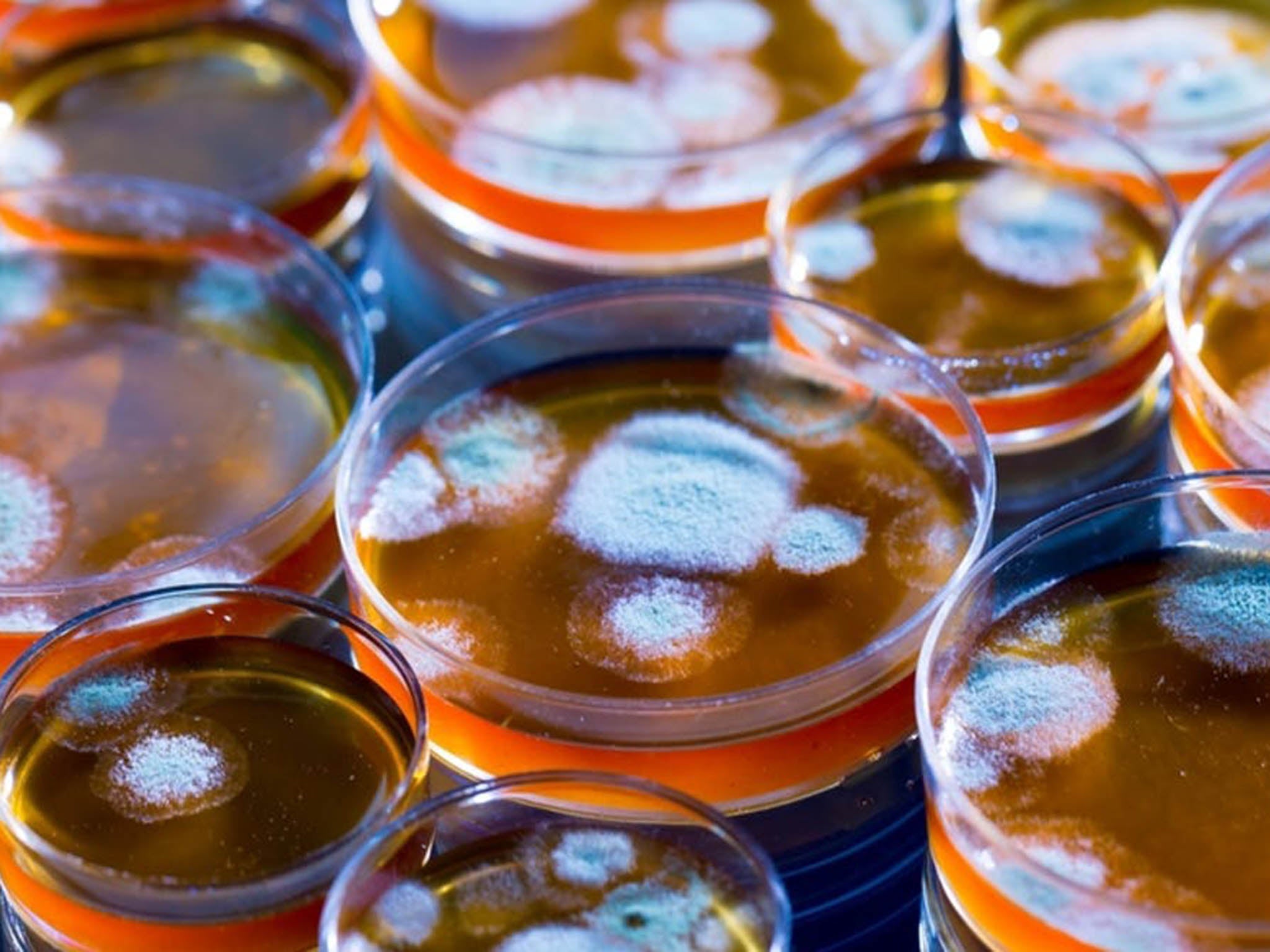 Nevertheless, Fleming decided to investigate. Removing a fleck of the mold, he placed it in a protein solution, where it grew rapidly. It is from this very culture that the molds producing the penicillin we use today are descended.

The mold was a cluster of flask-shaped cells that resembled a brush, its spores forming at the tips of branching hyphae, or tubular filaments. Noting the structure of the mold cells, Fleming identified them as belonging to the Penicillium group, named from the Latin penicillus, meaning brush (they were later found to be P. notatum). He proceeded to implant the mold on plates with different pathogenic bacteria, some of which were affected dramatically (notably gonococcus, the cause of gonorrhea), others not at all (B. typhosus, B. dysenteria). When rabbits and mice were injected with a mold extract, their health and habits were not altered in the least. With mounting excitement, Fleming added penicillin to a sample of human blood serum. The white blood cells were neither injured nor restricted.

In retrospect, it is puzzling how resistant the world was to the drug it so desperately needed. News spread slowly and monies for production failed to appear. Many people were skeptical about the potential of the mold that had alighted by chance on Fleming’s plate.

Time and again the persistent scientist tried to interest his colleagues in penicillin, but doctors turned a deaf ear, disinclined to experiment on their patients with a common mold. Fleming made a detailed report to a group of bacteriologists, but they, too, failed to take interest in his find. Further problems resulted from the fragility of the mold; it was weak, impure, and easily destroyed by climatic and acidic changes. Huge amounts were necessary to obtain a concentration of penicillin sufficient for even one patient, and Fleming lacked adequate funds. Penicillin lay neglected for ten years, but Fleming did not allow his mold to die.

With World War II came an urgent need for antiseptics to battle infections of the wounded troops. Dr. Howard Walter Florey, professor of pathology at Oxford’s Sir William Dunn School of Pathology, had heard of Fleming’s mold and, against the severe odds, undertook further research. With a stellar team of 20 scientists and technicians, Florey recultivated Fleming’s mold.

For months this team tended huge vats of smelly, moldy broth, striving to extract the key ingredient. Dr. Ernst Boris Chain managed to dissolve out of the solution a brown powder, which was instantly lethal to some bacteria; actually the extract contained only about 5 percent penicillin in its pure chemical form.

The scientists tested the substance on 80 different microbes. They determined that the blood fluids were not hostile to it and that white blood cells were not harmed or inactivated. They prepared a salt of penicillin (containing, salts of sodium and calcium), which was more stable than the mold, and successfully cured mice injected with lethal doses of Staphylococcus aureus, Streptococcus pyogenes, and other bacteria. Their findings laid the foundation for penicillin therapy as practiced today.

In 1940 penicillin was used on the first human patient, a policeman with an advanced case of blood infection. For five days doctors administered the drug every two to three hours; penicillin passes readily out of the body in the urine and must therefore be replaced at regular, frequent intervals.

The policeman had recovered significantly when the penicillin supply gave out and injections were halted. The infection flared up and ultimately took control. The British scientists could not possibly produce enough penicillin to be useful, months of work being required in order to save one life. In the second case, however, a young boy, also suffering from blood infection, received sufficient penicillin to recover.

With only five cases behind them, three of which had had successful results, the doctors were invited to America to carry on their research under the sponsorship of the Rockefeller Foundation. At the Northern Regional Research Laboratory in Peoria, Illinois, began another story: large-scale production of the invaluable drug.