Where does Wasabi Come From and What is Real Wasabi Made Of?

Most Americans who order sushi in a Japanese restaurant will recognize the condiments on the platter.

One is a tangle of thin slices of pickled ginger, intended for palate-cleansing between bites, and the other is a glob of fiery green “wasabi.” Genuine ginger, yes, but real wasabi, probably not. Most people outside of Japan have never tasted real wasabi.

So what is that ball of green paste on your plate at the local sushi bar? It’s a blend of horseradish, mustard, cornstarch, and yellow and blue dyes, packaged as a dry powder to be made into a thick paste with water. Put more than a dab on your tongue and the incendiary stuff will clean your sinuses, make your eyes water, and nearly take your head off. The experience of real wasabi, on the other hand, is surprisingly refined. 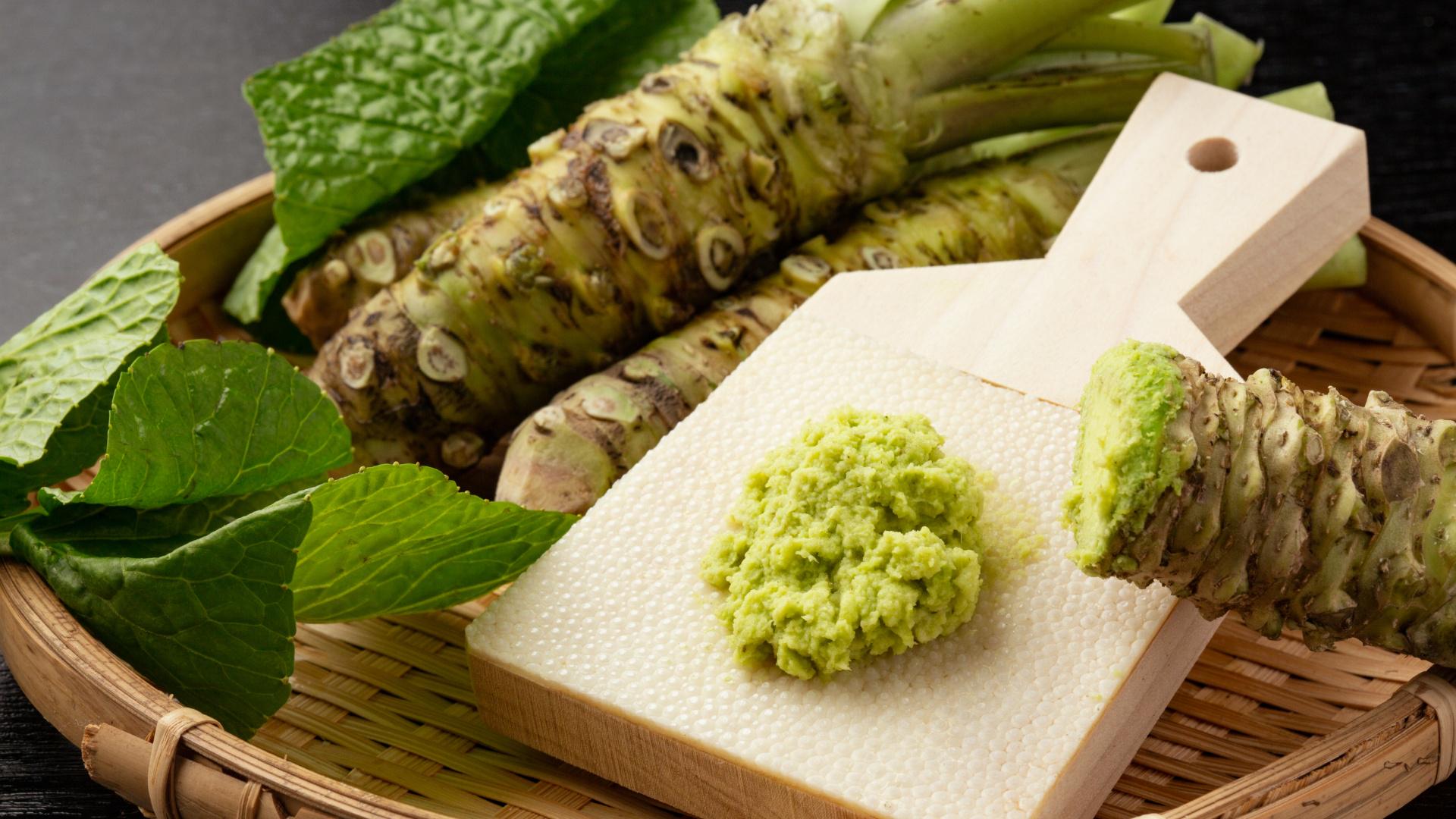 True wasabi is a green-hued underground stem, or rhizome, known botanically as Wasabia japonica or Eutrema japonica, among other names. And it’s not pretty.

Long, stringy roots grow out of its sides, and even when cleaned up, it looks like a knobby sweet potato on a bad hair day. Wasabi is extremely hard to grow, requiring highly specialized conditions in icy waters, and there are only about five growers worldwide. It costs anywhere from $20 to $80 a pound wholesale and about $100 a pound retail. That’s why it’s rare to find the real thing outside of Japan.

But I was lucky enough to find some.

Andy Kikuyama, owner of KIKU, a Japanese restaurant in Pittsburgh, set up a taste comparison for Marlene and me. He placed two tiny saucers on the table. In the one on the left, a knob of the familiar bluish-green impostor. In the one on the right, a knob of pale yellowish-green, genuine wasabi. It was hard to tell them apart by their appearance.

With a chopstick, we picked up a tiny bit from the familiar mock wasabi in the left-hand dish and placed it on our tongues. The texture was a bit gritty and chalky, and the experience was one of intense heat, with no flavor to speak of.

Next, we tried the real thing. The texture was that of a finely grated vegetable. The taste was slightly nutty, slightly sweet. The heat was instant and bright, more of a brief kick than the long burn of chili peppers; it subsided into a very pleasant, mild vegetable flavor that even people normally averse to hot food might enjoy.

“Americans use much more wasabi than the Japanese do. They seem to want punch, not subtlety,” Andy says. “We keep both kinds in the restaurant, but we always serve the real wasabi with white sashimi, thin slices of raw fish eaten as is, usually yellowtail, snapper, and flounder.

When there are many flavors in a dish, such as in cold soba noodles or intricate forms of sushi, we serve the horseradish type, because when mixed with soy sauce the subtlety of the real wasabi is wasted.” He added that wasabi is never used in cooking because it loses its flavor when heated. (I explained that isothio cyanates, the pungent chemicals in wasabi, are thermally unstable, but I’m not sure they were listening.)

Until a few years ago, all true wasabi came from a small number of growers in Japan. But now an American company, Pacific Farms, in Florence, Oregon, grows the real thing and markets it in paste form.