Why are Fresh Hard Boiled Eggs harder to peel and How do you make them easier to peel?

When the eggs are done, cool them down quickly in cold running water. That shrinks the albumen away from the shell somewhat and makes an egg easier to peel.

It also keeps the yolks from turning green. Very fresh eggs are harder to peel because the albumen tends to stick to the membrane on the inside of the shell. But after several days the membrane retreats and the sticking tendency diminishes, so don’t hard-cook your freshest ones.

By the way, after you hard-cook eggs, keep them refrigerated. It’s easiest if you put them right back in the carton containing your uncooked eggs. But how do you tell the cooked ones from the raw? Easy. Put an egg on the counter and give it a spin. If it resists spinning, it’s uncooked, but if it spins like a top, it’s hard. The effect is most noticeable if you spin the eggs on their larger ends. 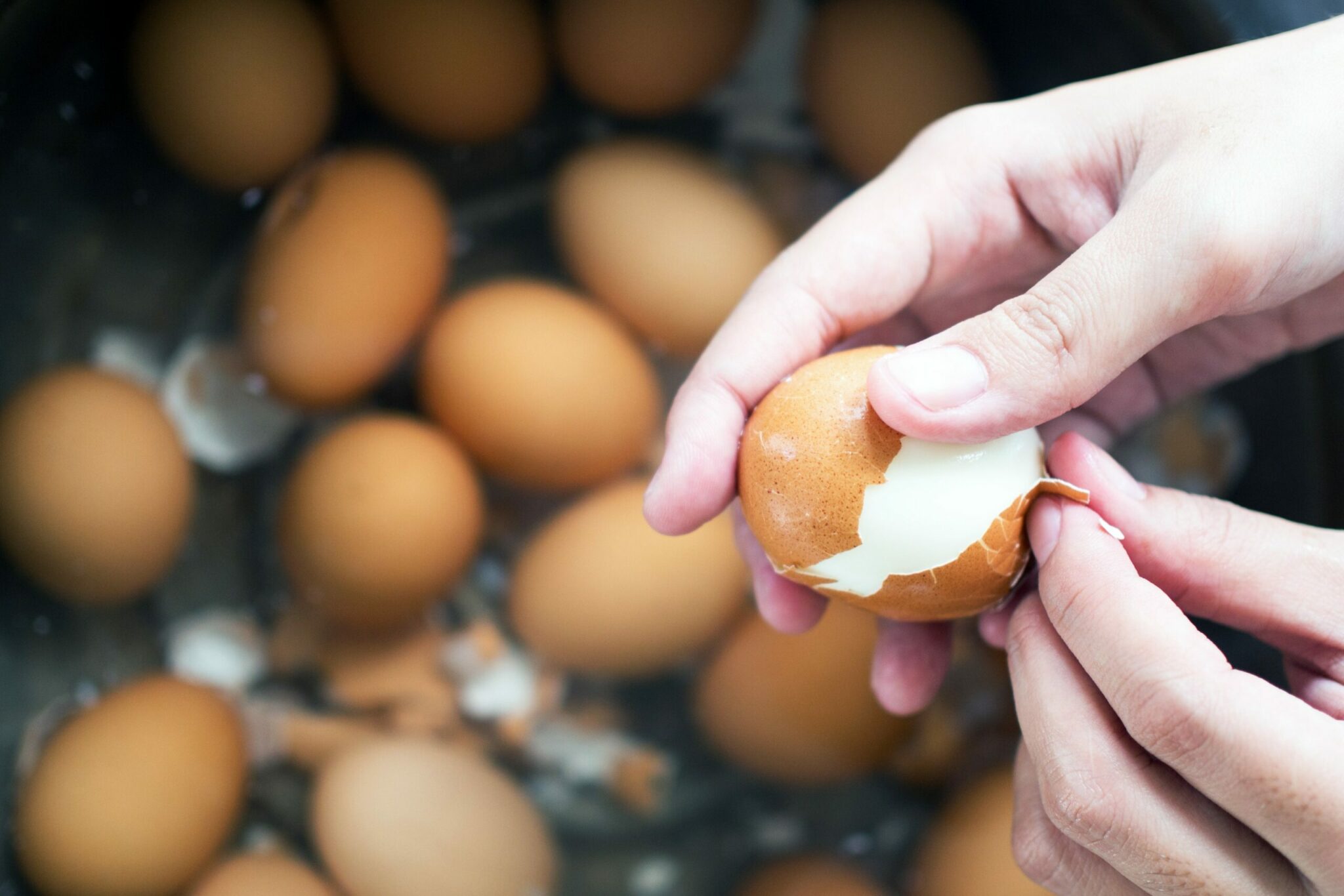 Or you could just pencil an H on the shell of each hard one, but where’s the fun in that?

The yolk and white in an uncooked egg are liquid and free to slosh around slightly inside the shell. When you twist the egg fast in an attempt to spin it, the contents resist moving. That is, the contents have inertia, a desire to stay motionless until pushed by some force or other. That’s Newton’s First Law of Motion: an egg yolk at rest will remain at rest until shoved by something harder than raw egg white. Those weren’t his exact words.

When you apply a twisting force to the outside of the egg, the force isn’t transmitted effectively through the egg white; it’s like trying to play pool with a liquid cue. The egg’s contents try to stay motionless and lag behind. In effect, some of your twisting force is wasted and the egg won’t spin as much as you might expect from how hard you twisted it. In a hard egg, on the other hand, the solid contents transmit your force to the whole egg mass, and the egg spins with the full amount of momentum you expect.

Want some more fun with egg physics? If you spin the egg on its wide end rather than on its side, it will spin faster. The reason is the same as for an ice skater who spins faster as soon as she pulls her arms and legs in closer to her body (closer to her spin axis). Her body’s spin momentum (or angular momentum) is proportional to both her spin speed (her angular velocity) and the average distance of her body parts from the spin axis (her average spin radius).

Her total momentum must remain constant (that is, angular momentum is conserved), so if she decreases her spin radius by pulling in her limbs, her spin velocity must go up. In the case of the egg, the spin radius is smaller when you spin it on its end rather than on its side, so it spins faster.