Why did Willie Sutton decide to rob banks and How did he do it?

“That’s where the money was,” quipped Willie.

At dawn on March 9, 1950, the most notorious criminal in the country, number one on the FBI’s “Most Wanted” list, Willie Sutton, was getting ready for work.

In his refuge on Staten Island, the Actor stood before the mirror staining his skin a dark olive, thickening his eyebrows with mascara, broadening his nostrils with two hollowed-out corks. Before going to bed he’d dyed his hair ash blond. 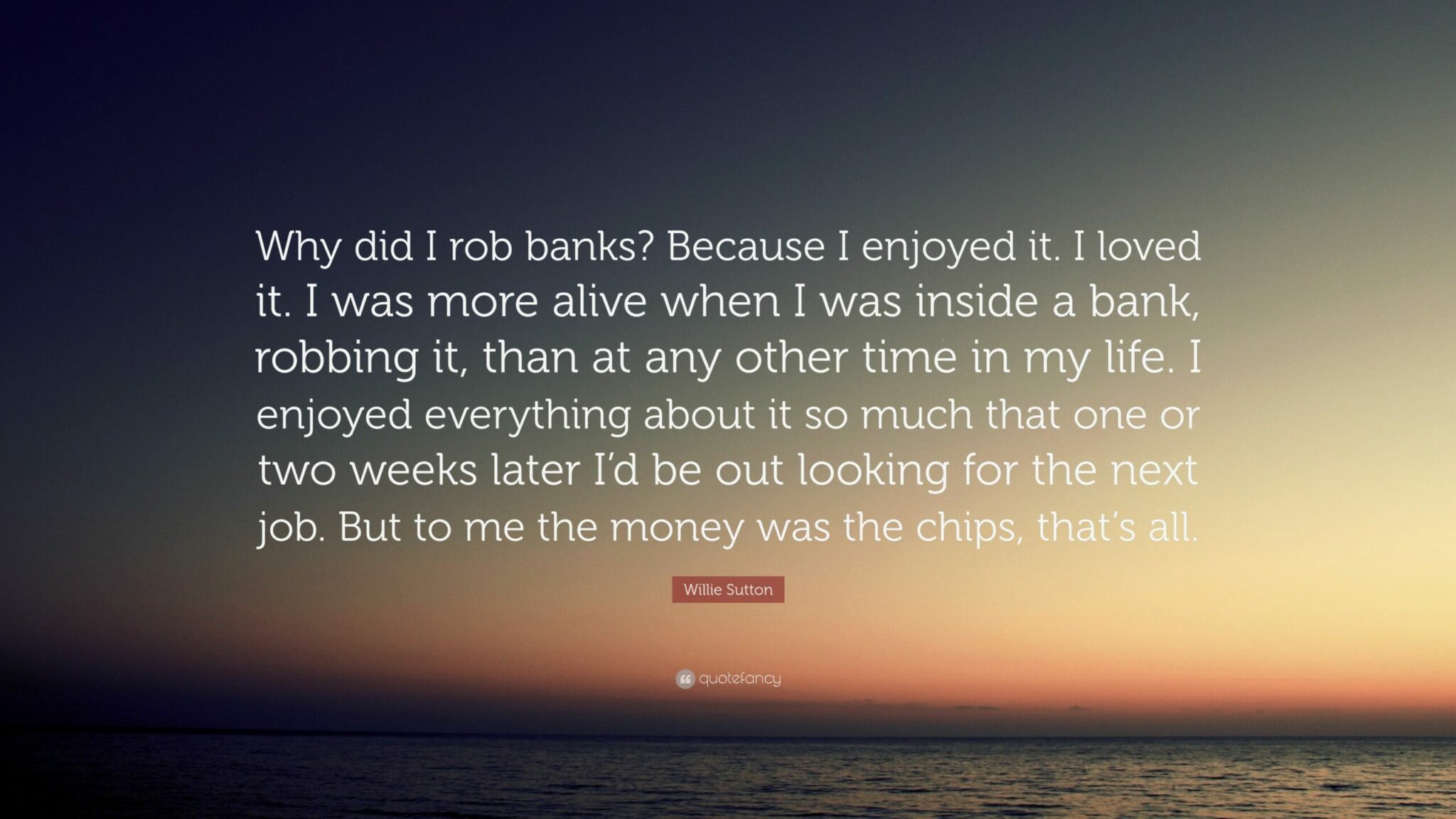 He chose a light gray, padded suit, cut to alter his silhouette. This was a variation on the Willie Sutton trademark method of wearing a uniform that would lead the guard to open the door without the least suspicion. The additional obstacle excited Willie more than anything else had in years.

With Willie that morning was his longtime partner in crime Tommy Kling, a tough, tiny thief with a penchant for women and booze, today wearing four-inch elevator shoes for a more commanding look. They met up with the third man, John de Venuta, at a garage on Queens Boulevard where they’d stashed a stolen getaway car.

Venuta had brought the Pontiac in from out of state and Willie had bought an old wreck under an assumed name, registered it, and dumped it. He kept the legitimate plates, put them on the Pontiac, then went to work on the registration, to make it match both car and license, all just in case they were stopped for a paltry traffic violation. In those days you could get a whole stack of registration forms at the motor vehicle bureau and the official rubber stamps were pretty easy to come by. But thanks to Slick Willie, the bureau subsequently changed the whole system.

The boys’ target that morning was the Manufacturers Trust Company in Sunnyside, Queens. For the three preceding weeks, Willie had been there every morning studying in meticulous detail the habits of the guard, the employees, the manager. “People are, above all things, victims of habit,” says Sutton in his autobiography, “especially when it comes to time.” This morning he was banking on a repeat of a scenario he’d witnessed 20 times.

At 8:30 Weston, the guard, bought his newspaper at the corner of 45th Street and ambled toward the bank, his nose glued to the newsprint as usual. But this time, he’d also picked up a shadow. Slick Willie was so close behind him as he inserted the key in the door that had Weston even glanced up, he would have seen the fugitive’s face reflected in the glass door.

But he just pushed on in, Willie tight behind him, turning with him as he closed it, so what when Weston finally did look up,, there was Sutton one step farther inside the bank than he. The stunned and trembling guard quietly acquiesced to Willie’s instructions to let his partners in and to give him the grand tour, conference rooms, alarm systems, the works. Kling and Venuta set up 17 chairs facing the vault, out of sight of passersby, for the 16 employees and mailman who would soon be arriving. Poor old Weston was then latched inconspicuously to a radiator grille near the front door with a dog chain Willie had brought along for the purpose.

As each employee arrived, he or she was ushered in by Kling or Venuta and calmly informed of the situation. Willie wanted them to obey but not to panic. “Don’t worry, folks,” he chimed with his usual good humor. “It’s only money. And it isn’t your money.”

Managers were a harder nut to crack, Sutton knew, because they had the authority, the status, the choice of playing the hero, with potentially disastrous results. But Slick Willie was smart. He understood what made people tick. He could play a psychological game and avoid the violence. In his long, astonishing career, the Babe Ruth of bank robbers never harmed anyone and that was why the American public loved him.

“Mr. Hoffman,” Sutton addressed the manager, who arrived at 9:05, a tense four minutes late, “you’re the bank manager. We know all about this place. We know what your duties are and we know what all your employees’ duties are. You have the first three numbers of the combination, and Mr. Sands, your assistant manager, has the last three. You are going to open the vault for us. If you give me any trouble, I want you to know that some of these here employees of yours will be shot. I don’t want you to have any false illusions about that. Now perhaps you don’t care about your own safety, but the health of these here employees of yours are your responsibility. If anything happens to them, the blame will be yours, not mine.”

Hoffman obliged and Sutton got into the vault. He went straight for the “teller banks,” the boxes holding the tellers’ cash for that day. Sands took the first step to open them with the master key, whereupon Kling brought in each teller to complete the operation, and then he slid the cash into a black silk bag. Hoffman had to open all the other compartments, including the reserve that usually has the big money. On March 9, for some reason, it was empty.

Sutton still estimated a haul of about $100,000 as he sent his partners to get the car. He ushered everyone down to the conference room, told them not to try anything, and walked suavely out of the bank. It was 9:45, just 15 minutes before the bank was to open.

The Pontiac cruised toward the Queensborough Bridge, its occupants watching police cars, sirens howling, speed in the opposite direction. They dumped the car at 72nd and York. Willie removed the plates; later he cut them up and tossed them over the side of the Staten Island ferry. The team split up and then reconvened at Venuta’s place to count the take, which came to a mere $64,000. “An artistic success,” remarked Willie, “but a commercial disappointment.”

Although the Actor remained at large for two more years, living four blocks from police headquarters in Brooklyn, it was this job for which he was finally convicted. He hadn’t really needed the cash. That very morning he’d wondered why he should be so foolish. But banks were an endless fascination for Willie Sutton.

They got his blood moving. Taking control at a fevered pitch and watching his plan unfurl with precision, that made life worth living.