Why do Lions Lay Around All Day Resting and What Do Lions Eat in the Wild? 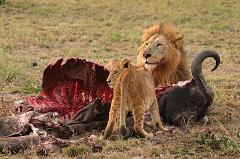 Lions use the rest of the time looking for food, either by hunting, by scavenging things that have died from disease or other natural causes, or by stealing food from hyenas and vultures.

Since they spend so little time hunting, they often aren’t successful in finding food.

As a result, the life of a lion is a matter of feast or famine, going several days without food, and then gorging itself when it can.

A male lion can eat 75 to 90 pounds in one sitting, meaning that a 600-pound zebra won’t necessarily satisfy every member in a pride, which is usually between ten to thirty-five lions.

Lions usually hunt in coordinated groups and stalk their prey.

They love to eat large mammals, such as wildebeest, wild boar, deer, impalas, zebras, and buffalo.

Young lions begin to display stalking behavior at about three months of age, but they do not hunt with the pride until they are almost a year old.